Historical Note 6.2 describes several ways in which digital computers have been used to implement NC In this section, we discuss two of these implementations that are distinguished from CNC: (1) direct NC and (2) distrihuted.\lC

The first attempt 10 use a digitulcuutputer to drive the NC machine tool was DNC This was in the late 19605 before the advent of CNC. A; initially implemented. DNC involved the control or a number of machine tools hy a single (mainframe) computer through direct connection and in real time. Instead of using a punched tape reader to enter the part program into the Mev, the program was transmitted to the MCU directly from the computer, one block of instructions at a time. This mode of operation was referred 10 by the name behind the tape reader (BTR). The ONe computer provided instruction blocks to the machine tool on demand; when a machine needed control commands, they were communicated to it immediately. As each block was executed by the machine, the next block was transmitted. As far as the machine tool was concerned, the operation was no different from that of a conventional NC controller. In theory, DNC relieved the NC system of its least reliable components: the punched tape and tape reader.

The general configuration of a ONe system is depicted in Figure 6.8. The system consisted of four components: (1) central computer, (2) bulk memory at the central computer site, (3) set of controlled machines, and (4) telecommunications lines to connect the machines to the central computer. In operation, the computer caned the required part program from bulk memory and sent it (one block at a time) to the designated machine tool. This procedure was replicated for all machine toots under direct control of the computer.

One commercially available ONC system during the 1970s claimed to be capable of controlling up to 256 machines.

In addition to transmitting data to the machines, the central computer also received data back from the machines to indicate operating performance in the shop (e.g., number of mac!Jil1illg ,,;ydcscompleted.uiaclune utilization, and breakdowns). ThU5, a central ob

jective of ONe was to achieve twoway communication between the machines and the central computer.

Advantages claimed for DNC in the early 19708 included: (1) high reliability of a central computer compared with individual hardwired MCUs; (2) elimination of the tape and tape reader, which were unreliable and errorprone; (3) control of multiple machines by one cornputer;(4) improved computational capability for circular interpolation; (5) part programs stored magnetically in bulk memory in a central location; and (6) computer located in an environmentally agreeable location. However, these advantages were not enough to persuade a conservative manufacturing community to pay the high investment cost for a ONC system, and some of the claimed advantages proved to be overly optimistic. 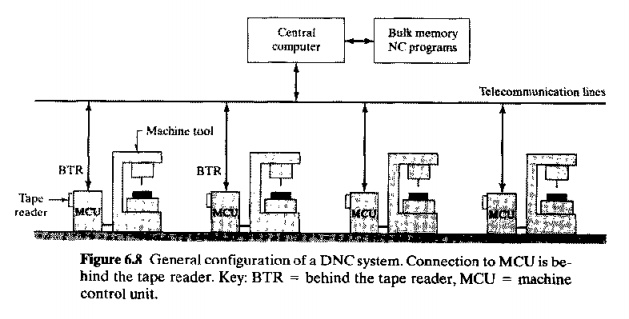 For example, elimination of tape readers was unrealistic because of the need for an alternative way to load part programs in case the central computer went down. The installations of DNC were limited lathe aerospace industry. which had been involved in N(' technology since the beginning and possessed a larger  number of NC machines. The.s~ machines were often dispersed throughout large factories, and DNC represented an efficient way to distribute part programs to the machines

As the number of CNC machine installations grew during the 1970s and 19805, DNe emerged once again, but in the i,orm o.f a distributed computer system, or distributed mencal control (ONe). The configuration of the new DNC is very SImilar to that shown In Figure 6.8 except that the central computer is connected to MCUs, which are themselves computers. This permits complete part programs to be sent to the machine tools. rather than one block at a time. It also permits easier and less costly installation of the overall system, because the individual CNC machines can be put into service and the distributed I\'C can be added later. Redundant computers improve system reliability compared with the original ONe. The new ONe permits twoway communication of data between the shop

floor and the central computer. which was one of the important features included in the old ONe. However. improvements in data collection devices as well as advances in computer

and communications technologies have expanded the range and flexibility of the information that can be gathered and disseminated. Some of the data and information sets included in the twoway communication flow are itemized in Table

6.4. This flow of information in DNC is similar to the information flow in shop floor control, discussed in Chapter 26.

Distributed NC systems can take on a variety of physical configurations, depending on the number of machine tools included, job complexity, security requirements, and equipment availability and preferences. There are several ways to configure a ONC system. We illustrate two types in Figure 6.9: (a) switching network and (bl LAN. Each type has several possibte variations.

Thc5wiIChing network is the simplest DNCsyslem to configure. It uses a data switching box to make a connection from the central computer to a given CNC machine for downloading part programs or uploading data. Transrrnssion of programs to the MCU is accomplished through a RS232C connection, (Virtually all commercial MCUs include the RS232C or compatible device as standard equipment today.) Use ora switching box limits the number of machines that can be included in the ONC system. The limit depends on 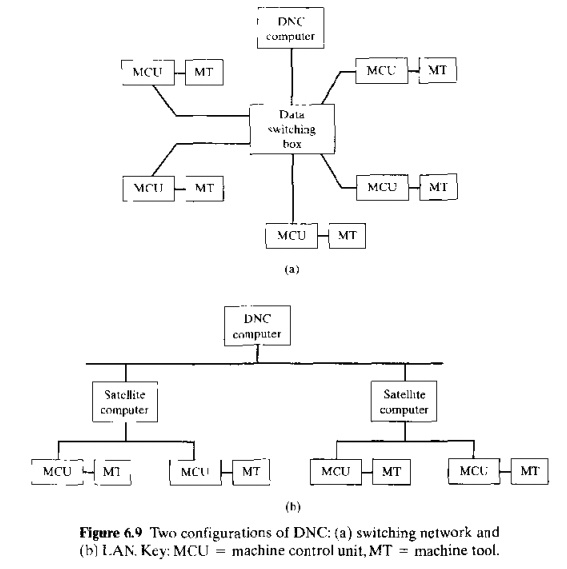 factors such as part program complexity, frequency of service required to each machine.and capabilities of the central computer. The number of machines in the ONe system can be increased by employing a serial link RS232C multiplexer.

Local area networks have been used for ONe since the early I980s. Various network structures are used m ONe systems, among which is the centralized structure illustrated in Figure 6.9( b). In this arrangement. the computer system is organized as a hierarchy, with the central [host} computer coordinating several satellite computers that are each responsible for a number of CNC machines. Alternative LAN structures are possible.each with its relative advantages and disadvantagcaLocal area networks in different sections and departments of a plant arc often interconnected in plant wide and corporate-wide networks.