There are three pairs of salivary glands in the mouth. They are the largest parotids gland in the cheeks, the sub-maxillary/ sub-mandibular in the lower jaw and the sublingual beneath the tongue. These glands have ducts such as Stenson’s duct, 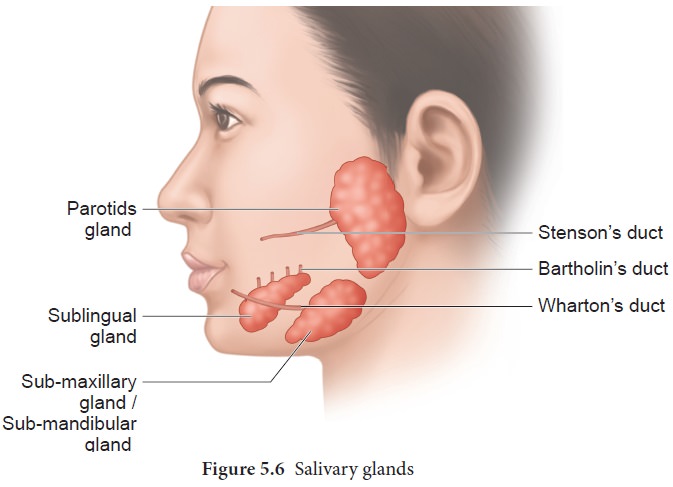 Wharton’s duct and Bartholin’s duct or duct of Rivinis respectively (Figure. 5.6). The salivary juice secreated by the salivary glands reaches the mouth through these ducts. The daily secretion of saliva from salivary glands ranges from 1000 to 1500mL

The liver, the largest gland in our body is situated in the upper right side of the abdominal cavity, just below the diaphragm. The liver consists of two major left and right lobes; and two minor lobes. These lobes are connected with diaphragm. Each lobe has many hepatic lobules (functional unit of liver) and is covered by a thin connective tissue sheath called the Glisson’s capsule. Liver cells (hepatic cells) secrete bile which is stored and concentrated in a thin muscular sac called the gall bladder. The duct of gall bladder (cystic duct) along with the hepatic duct from the liver forms the common bile duct. The bile duct passes downwards and joins with the main pancreatic duct to form a common duct called hepato-pancreatic duct. The opening of the hepato-pancreatic duct into the duodenum is guarded by a sphincter called the sphincter of Oddi (Figure.5.7). Liver has high power of regeneration and liver cells are replaced by new ones every 3-4 weeks. 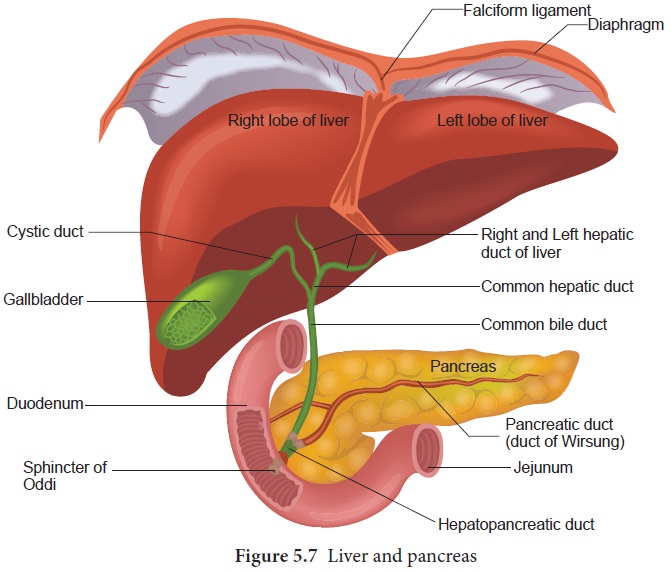 2.     Stores glucose in the form of glycogen or disperses glucose into the blood stream with the help of pancreatic hormones

5.     Involves in the synthesis of non-essential amino acids and urea.

The second largest gland in the digestive system is the Pancreas, which is a yellow coloured, compound elongated organ consisting of exocrine and endocrine cells. It is situated between the limbs of the ‘U’ shaped duodenum. The exocrine portion secretes pancreatic juice containing enzymes such as pancreatic amylase, trypsin and pancreatic lipase and the endocrine part called Islets of Langerhans secretes hormones such as insulin and glucagon. The pancreatic duct directly opens into the duodenum.