Digestion of food and role of digestive enzymes

The process of digestion converts the solid- food into absorbable and assimilable forms. This is accomplished by mechanical and chemical processes.

Digestion of food and role of digestive enzymes

The process of digestion converts the solid- food into absorbable and assimilable forms. This is accomplished by mechanical and chemical processes.

Digestion in the buccal cavity

The smell, sight and taste as well as the -mechanical stimulation of food in the mouth, triggers a reflex action which -results in the secretion of saliva. The -mechanical digestion starts in the mouth by grinding and chewing of food. It is called mastication. The saliva contain water, electrolytes (Na+, K+, Cl–, HCC3), salivary amylase (ptyalin), antibacterial agent lysozyme and a lubricating agent mucus (a glycoprotein). The mucus in saliva prepares the food for swallowing by moistening, softening, lubricating and adhering the masticated food into a bolus. About 30 percent of polysaccharide, starch is hydrolyzed by the salivary amylase enzyme into disaccharides (maltose). The bolus is then passed into the pharynx and then into the oesophagus by swallowing or deglutition. The bolus -further passes down through the oesophagus to the stomach by successive waves of muscular contraction called peristalsis. The gastro oesphageal sphincter controls the passage of food into the stomach.

Digestion in the stomach

Food remains in the stomach for 4 to 5 hours, the rhythmic peristaltic movement churns and mixes the food with gastric juice and make it into a creamy liquid called chyme. The gastric secretion is partly controlled by autonomic reflexes. The secretion of gastric juice begins when the food is in the mouth. The -gastric juice contains HCl and proenzymes. The proenzyme pepsinogen, on exposure to HCl gets converted into the active enzyme pepsin which converts proteins into -proteoses and peptones (peptides). The HCl provides an acidic medium (pH1.8) which is optimum for pepsin, kills bacteria and other harmful organisms and avoids putrifaction. The mucus and bicarbonates present in the gastric juice play an important role in lubrication and protection of the mucosal epithelium from the eroding nature of the highly acidic HCl (Figure. 5.8). Another proteolytic enzyme found in gastric juice of infants is rennin helps in the digestion of milk protein, caseinogen to casein in the presence of calcium ions. This enzyme-secretion gradually reduces with aging. 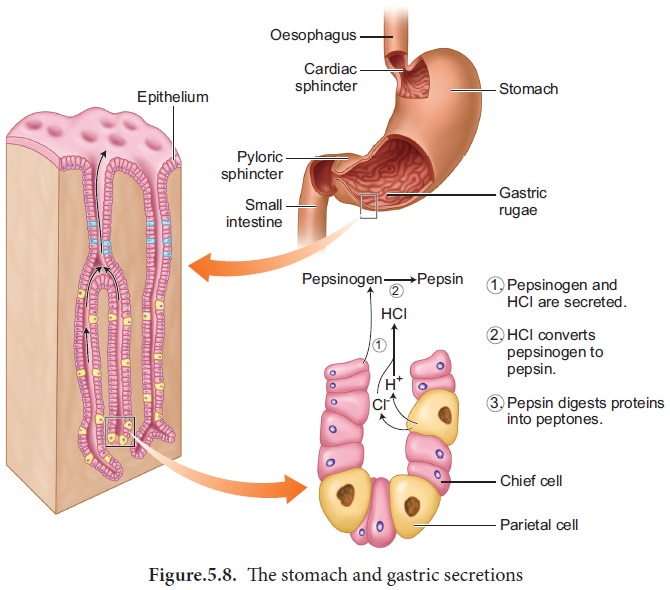 Digestion in the small intestine

The pancreatic juice contains enzymes such as trypsinogen, chymotrypsinogen, carboxypeptidases, pancreatic amalyses, pancreatic lipases and nucleases. -Trypsinogen is activated by an enzyme, enterokinase, secreted by the intestinal mucosa into active trypsin, which in turn activates the enzyme chymotrypsinogen in the pancreatic juice. The bile contains bile pigments (bilirubin and biliverdin) as the break down products of haemoglobin of dead RBCs, bile salts, cholesterol and phospholipids but has no enzymes. Bile helps in emulsification of fats. Bile salts reduce the surface tension of fat droplets and break them into small globules. Bile also activates lipases to digest lipids.

Proteins and partially digested proteins in the chyme on reaching the intestine are acted upon by the proteolytic enzymes of pancreatic juice. Trypsin hydrolyses proteins into polypeptides and peptones, while chymotrypsin hydrolyses peptide bonds associated with specific amino acids. 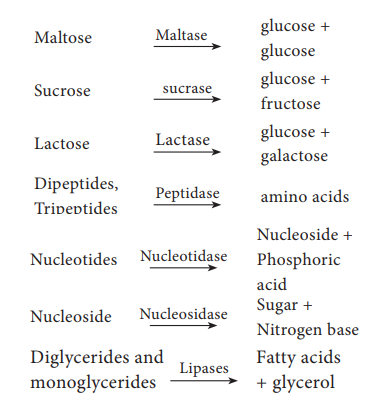 The mucus along with the bicarbonate ions from the pancreas provides an alkaline medium (pH 7.8) for the enzymatic action. As a result of digestion, all macromolecules of food are converted into their corresponding monomeric units.

The simple substances thus formed are absorbed in the jejunum and ileum region of the small intestine. The undigested and unabsorbed substances are propelled into the large intestine. The activities of the gastro-intestinal tract are carried out by the neural and hormonal control for proper coordination of different parts. Gastric and intestinal secretions- are stimulated by neural signals. Hormonal control of the secretion of -digestive juices is carried out by local hormones produced by the gastric and intestinal mucosa.