Fats of the Diet. By far the most abundant fats of thediet are the neutral fats, also known as triglycerides, each molecule of which is composed of a glycerol nucleus and three fatty acid side chains.

Fats of the Diet. By far the most abundant fats of thediet are the neutral fats, also known as triglycerides, each molecule of which is composed of a glycerol nucleus and three fatty acid side chains, as shown in Figure 65–3. Neutral fat is a major constituent in food of animal origin but much, much less so in food of plant origin. 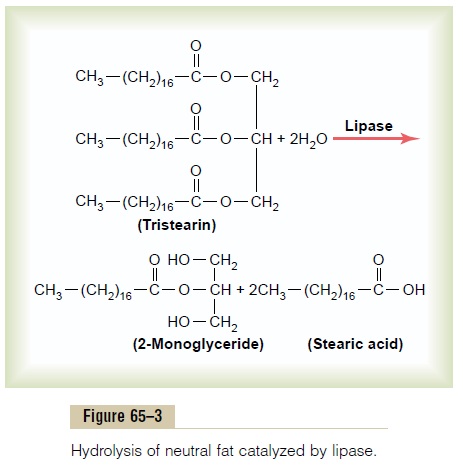 In the usual diet are also small quantities of phos-pholipids, cholesterol, and cholesterol esters. The phos-pholipids and cholesterol esters contain fatty acid and therefore can be considered fats themselves. Choles-terol, however, is a sterol compound that contains no fatty acid, but it does exhibit some of the physical and chemical characteristics of fats; plus, it is derived from fats and is metabolized similarly to fats. Therefore, cholesterol is considered, from a dietary point of view, a fat.

Digestion of Fats in the Intestine. A small amount oftriglycerides is digested in the stomach by lingual lipase that is secreted by lingual glands in the mouth and swallowed with the saliva. This amount of digestion is less than 10 per cent and generally unimportant.

Finally, inside the cytosol of the enterocyte are mul-tiple other peptidases that are specific for the remain-ing types of linkages between amino acids. Within minutes, virtually all the last dipeptides and tripeptides Instead, essentially all fat digestion occurs in the small intestine as follows.

Emulsification of Fat by Bile Acids and Lecithin.  The first step in fat digestion is physically to break the fat globules into very small sizes so that the water-soluble digestive enzymes can act on the globule surfaces. This process is called emulsification of the fat, and it begins by agitation in the stomach to mix the fat with the products of stomach digestion.

Then, most of the emulsification occurs in the duo-denum under the influence of bile, the secretion from the liver that does not contain any digestive enzymes. However, bile does contain a large quantity of bile salts as well as the phospholipid lecithin. Both of these, but especially the lecithin, are extremely important foremulsification of the fat. The polar parts (the points where ionization occurs in water) of the bile salts and lecithin molecules are highly soluble in water, whereas most of the remaining portions of their molecules are highly soluble in fat. Therefore, the fat-soluble por-tions of these liver secretions dissolve in the surface layer of the fat globules, with the polar portions pro-jecting. The polar projections, in turn, are soluble in the surrounding watery fluids, which greatly decreases the interfacial tension of the fat and makes it soluble as well.

When the interfacial tension of a globule of non-miscible fluid is low, this nonmiscible fluid, on agita-tion, can be broken up into many very minute particles far more easily than it can when the interfacial tension is great. Consequently, a major function of the bile salts and lecithin, especially the lecithin, in the bile is to make the fat globules readily fragmentable by agi-tation with the water in the small bowel. This action is the same as that of many detergents that are widely used in household cleaners for removing grease.

The lipase enzymes are water-soluble compounds and can attack the fat globules only on their surfaces. Consequently, it can be readily understood how impor-tant this detergent function of bile salts and lecithin is for digestion of fats.

Digestion of Triglycerides by Pancreatic Lipase. By far themost important enzyme for digestion of the triglyc-erides is pancreatic lipase, present in enormous quan-tities in pancreatic juice, enough to digest within 1 minute all triglycerides that it can reach. In addition, the enterocytes of the small intestine contain still more lipase, known as enteric lipase, but this is usually not needed.

End Products of Fat Digestion. Most of the triglyc-erides of the diet are split by pancreatic lipase into free fatty acids and 2-monoglycerides, as shown inFigure 65–4. 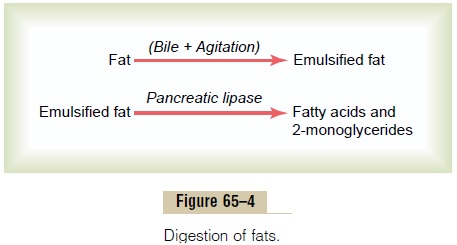 Role of Bile Salts to Accelerate Fat Digestion—Formation of Micelles. The hydrolysis of triglycerides is a highlyreversible process; therefore, accumulation of mono-glycerides and free fatty acids in the vicinity of digest-ing fats quickly blocks further digestion. But the bile salts play the additional important role of removing the monoglycerides and free fatty acids from the vicin-ity of the digesting fat globules almost as rapidly as these end products of digestion are formed. This occurs in the following way.

Bile salts, when in high enough concentration in water, have the propensity to form micelles, which are small spherical, cylindrical globules 3 to 6 nanometers in diameter composed of 20 to 40 molecules of bile salt. These develop because each bile salt molecule is composed of a sterol nucleus that is highly fat-soluble and a polar group that is highly water-soluble. The sterol nucleus encompasses the fat digestate, forming a small fat globule in the middle of a resulting micelle, with polar groups of bile salts projecting outward to cover the surface of the micelle. Because these polar groups are negatively charged, they allow the entire micelle globule to dissolve in the water of the diges-tive fluids and to remain in stable solution until the fat is absorbed into the blood.

The bile salt micelles also act as a transport medium to carry the monoglycerides and free fatty acids, both of which would otherwise be relatively insoluble, to the brush borders of the intestinal epithelial cells. There the monoglycerides and free fatty acids are absorbed into the blood, as discussed later, but the bile salts themselves are released back into the chyme to be used again and again for this “ferrying” process.

The bile salt micelles play the same role in “ferry-ing” free cholesterol and phospholipid molecule diges-tates that they play in “ferrying” monoglycerides and free fatty acids. Indeed, essentially no cholesterol is absorbed without this function of the micelles.