Absorption of Ions in the Small Intestine

Active Transport of Sodium. Twenty to 30 grams of sodiumare secreted in the intestinal secretions each day.

Whenever significant amounts of intestinal secre-tions are lost to the exterior, as in extreme diarrhea, the sodium reserves of the body can sometimes be depleted to lethal levels within hours. Normally, however, less than 0.5 per cent of the intestinal sodium is lost in the feces each day because it is rapidly absorbed through the intestinal mucosa. Sodium also plays an important role in helping to absorb sugars and amino acids, as we shall see in subsequent discussions.

The basic mechanism of sodium absorption from the intestine is shown in Figure 65–8. The principles of this mechanism are also essentially the same as for absorption of sodium from the gallbladder and renal tubules. 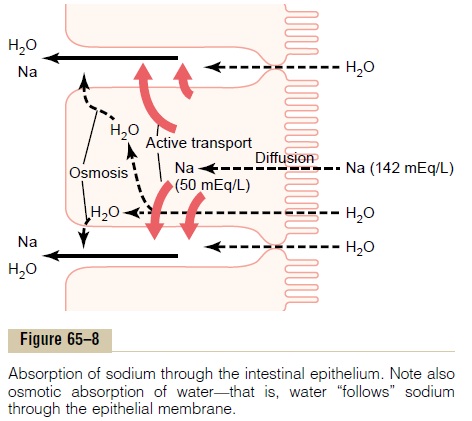 The motive power for sodium absorption is pro-vided by active transport of sodium from inside the epithelial cells through the basal and side walls of these cells into paracellular spaces. This is demon-strated by the heavy red arrows in Figure 65–8. This active transport obeys the usual laws of active trans-port: it requires energy, and the energy process is cat-alyzed by appropriate adenosine triphosphatase enzymes in the cell membrane Part of the sodium is absorbed along with chloride ions; in fact, the negatively charged chloride ions are mainly passively “dragged” by the positive electrical charges of the sodium ions.

Active transport of sodium through the basolateral membranes of the cell reduces the sodium concentra-tion inside the cell to a low value (about 50 mEq/L), as also shown in Figure 65–8. Because the sodium con-centration in the chyme is normally about 142 mEq/L (that is, about equal to that in plasma), sodium moves down this steep electrochemical gradient from the chyme through the brush border of the epithelial cell into the epithelial cell cytoplasm. This provides still more sodium ions to be transported by the epithelial cells into the paracellular spaces.

Aldosterone Greatly Enhances Sodium Absorption. When aperson becomes dehydrated, large amounts of aldos-terone almost always are secreted by the cortices of the adrenal glands. Within 1 to 3 hours this aldosterone causes increased activation of the enzyme and trans-port mechanisms for all aspects of sodium absorption by the intestinal epithelium. And the increased sodium absorption in turn causes secondary increases in absorption of chloride ions, water, and some other substances.

Absorption of Chloride Ions in the Duodenum and Jejunum. In the upper part of the small intestine, chloride ion absorption is rapid and occurs mainly by diffusion— that is, absorption of sodium ions through the epithe-lium creates electronegativity in the chyme and electropositivity in the paracellular spaces between the epithelial cells. Then chloride ions move along this electrical gradient to “follow” the sodium ions.

Absorption of Bicarbonate Ions in the Duodenum and Jejunum.

Often large quantities of bicarbonate ions must be reabsorbed from the upper small intestine because large amounts of bicarbonate ions have been secreted into the duodenum in both pancreatic secretion and bile. The bicarbonate ion is absorbed in an indirect way as follows: When sodium ions are absorbed, moderate amounts of hydrogen ions are secreted into the lumen of the gut in exchange for some of the sodium. These hydrogen ions in turn combine with the bicarbonate ions to form carbonic acid (H2CO3), which then disso-ciates to form water and carbon dioxide. The water remains as part of the chyme in the intestines, but the carbon dioxide is readily absorbed into the blood and subsequently expired through the lungs. Thus, this is so-called “active absorption of bicarbonate ions.” It is the same mechanism that occurs in the tubules of the kidneys.

The epithelial cells on the surfaces of the villi in the ileum as well as on all surfaces of the large intestine have a special capability of secreting bicarbonate ions in exchange for absorption of chloride ions. This is important because it provides alkaline bicarbonate ions that neutralize acid products formed by bacteria in the large intestine.

The toxins of cholera and of some other types of diar-rheal bacteria can stimulate the fold secretion so greatly that this secretion often becomes much greater than can be reabsorbed, thus sometimes causing loss of 5 to 10 liters of water and sodium chloride as diarrheaeach day. Within 1 to 5 days, many severely affected patients die from this loss of fluid alone.

Extreme diarrheal secretion is initiated by entry of a subunit of cholera toxin into the epithelial cells. This stimulates formation of excess cyclic adenosine monophosphate, which opens tremendous numbers of chloride channels, allowing chloride ions to flow rapidly from inside the cell into the intestinal crypts. In turn, this is believed to activate a sodium pump that pumps sodium ions into the crypts to go along with the chlo-ride ions. Finally, all this extra sodium chloride causes extreme osmosis of water from the blood, thus provid-ing rapid flow of fluid along with the salt. All this excess fluid washes away most of the bacteria and is of value in combating the disease, but too much of a good thing can be lethal because of serious dehydration of the whole body that might ensue. In most instances, the life of a cholera victim can be saved by administration of tremendous amounts of sodium chloride solution to make up for the loss.

Absorption of Other Ions. Calcium ionsare activelyabsorbed into the blood especially from the duode-num, and the amount of calcium ion absorption is very exactly controlled to supply exactly the daily need of the body for calcium. One important factor controlling calcium absorption is parathyroid hormone secreted by the parathyroid glands, and another is vitamin D. Parathyroid hormone activates vitamin D, and the activated vitamin D in turn greatly enhances calcium absorption.

Iron ions are also actively absorbed from the smallintestine. The principles of iron absorption and regu-lation of its absorption in proportion to the body’s need for iron, especially for the formation of hemo-globin.