It is suggested that the reader review the basic principles of transport of substances through cell membranes discussed.

It is suggested that the reader review the basic principles of transport of substances through cell membranes discussed. The following paragraphs present specialized applications of these transport processes during gastrointestinal absorption.

The total quantity of fluid that must be absorbed each day by the intestines is equal to the ingested fluid (about 1.5 liters) plus that secreted in the various gas-trointestinal secretions (about 7 liters). This comes to a total of 8 to 9 liters. All but about 1.5 liters of this is absorbed in the small intestine, leaving only 1.5 liters to pass through the ileocecal valve into the colon each day.

The stomach is a poor absorptive area of the gas-trointestinal tract because it lacks the typical villus type of absorptive membrane, and also because the junctions between the epithelial cells are tight junc-tions. Only a few highly lipid-soluble substances, such as alcohol and some drugs like aspirin, can be absorbed in small quantities.

Figure 65–5 demonstrates the absorptive surface of the small intestinal mucosa, showing many folds called valvulae conniventes (or folds of Kerckring), whichincrease the surface area of the absorptive mucosa about threefold. These folds extend circularly most of the way around the intestine and are especially well developed in the duodenum and jejunum, where they often protrude as much as 8 millimeters into the lumen. 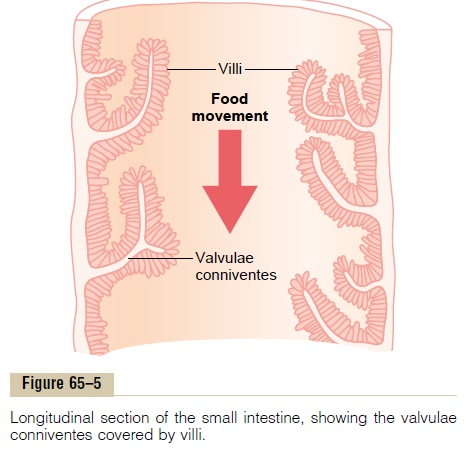 Also located on the epithelial surface of the small intestine all the way down to the ileocecal valve are literally millions of small villi. These project about 1 millimeter from the surface of the mucosa, as shown on the surfaces of the valvulae conniventes in Figure 65–5 and in individual detail in Figure 65–6. The villi lie so close to one another in the upper small intestine that they touch in most areas, but their distribution is less profuse in the distal small intestine. The presence of villi on the mucosal surface enhances the total absorptive area another 10-fold. 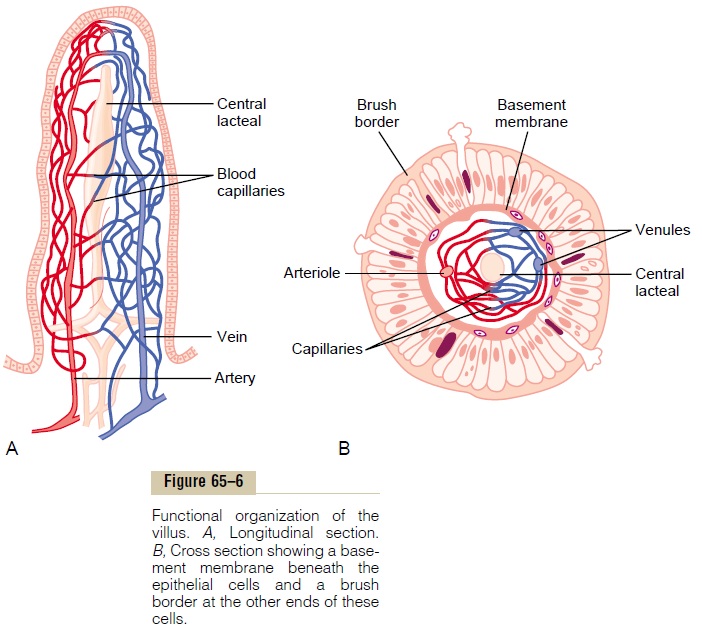 Thus, the combination of the folds of Kerckring, the villi, and the microvilli increases the total absorptive area of the mucosa perhaps 1000-fold, making a tremendous total area of 250 or more square meters for the entire small intestine—about the surface area of a tennis court.

Figure 65–6B shows a cross section of the villus, and Figure 65–7 shows many small pinocytic vesicles, which are pinched-off portions of infolded enterocyte mem-brane forming vesicles of absorbed fluids that have been entrapped. Small amounts of substances are absorbed by this physical process of pinocytosis. 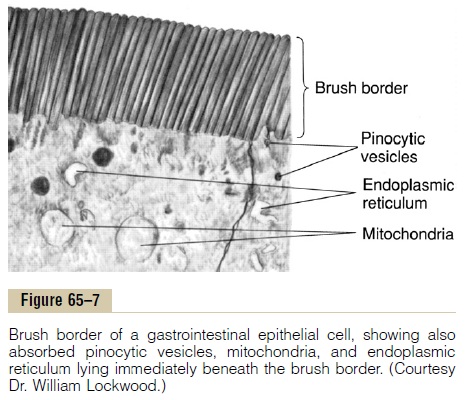 Extending from the epithelial cell body into each microvillus of the brush border are multiple actin fila-ments that contract rhythmically to cause continual movement of the microvilli, keeping them constantly exposed to new quantities of intestinal fluid.