Carbohydrate Foods of the Diet. Only three major sourcesof carbohydrates exist in the normal human diet.

Carbohydrate Foods of the Diet. Only three major sourcesof carbohydrates exist in the normal human diet. They are sucrose, which is the disaccharide known popularly as cane sugar; lactose, which is a disaccharide found in milk; and starches, which are large polysaccharides present in almost all nonanimal foods, particularly in potatoes and the different types of grains. Other car-bohydrates ingested to a slight extent are amylose, glycogen, alcohol, lactic acid, pyruvic acid, pectins, dex-trins, and minor quantities ofcarbohydrate derivatives in meats.

The diet also contains a large amount of cellulose, which is a carbohydrate. However, no enzymes capable of hydrolyzing cellulose are secreted in the human digestive tract. Consequently, cellulose cannot be considered a food for humans.

Digestion of Carbohydrates in the Mouth and Stomach. Whenfood is chewed, it is mixed with saliva, which contains the digestive enzymeptyalin (an a-amylase) secreted mainly by the parotid glands. This enzyme hydrolyzes starch into the disaccharide maltose and other small polymers of glucose that contain three to nine glucose molecules, as shown in Figure 65–1. However, the food remains in the mouth only a short time, so that prob-ably not more than 5 per cent of all the starches will have become hydrolyzed by the time the food is swallowed. 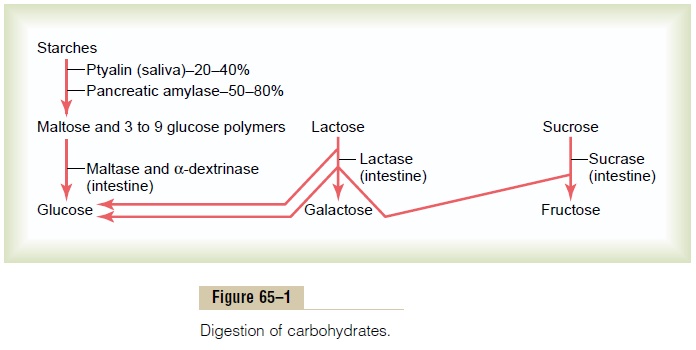 However, starch digestion sometimes continues in the body and fundus of the stomach for as long as 1 hour before the food becomes mixed with the stomach secretions. Then activity of the salivary amylase is blocked by acid of the gastric secretions because the amylase is essentially nonactive as an enzyme once the pH of the medium falls below about 4.0. Nevertheless, on the average, before food and its accompanying saliva do become completely mixed with the gastric secretions, as much as 30 to 40 per cent of the starches will have been hydrolyzed mainly to form maltose.

Digestion of Carbohydrates in the Small Intestine Digestion by Pancreatic Amylase. Pancreatic secre-tion, like saliva, contains a large quantity of a-amylase that is almost identical in its function with the a-amylase of saliva but is several times as powerful. Therefore, within 15 to 30 minutes after the chyme empties from the stomach into the duodenum and mixes with pancreatic juice, virtually all the carbohy-drates will have become digested.

In general, the carbohydrates are almost totally con-verted into maltose and/or other very small glucosepolymers before passing beyond the duodenum orupper jejunum.

Hydrolysis of Disaccharides and Small Glucose Polymers into Monosaccharides by Intestinal Epithelial Enzymes. Theenterocytes lining the villi of the small intestine contain four enzymes (lactase, sucrase, maltase, and a-dextrinase), which are capable of splitting the disac-charides lactose, sucrose, and maltose, plus other small glucose polymers, into their constituent monosaccha-rides. These enzymes are located in the enterocytes cov-ering the intestinal microvilli brush border, so that the disaccharides are digested as they come in contact with these enterocytes.

In the ordinary diet, which contains far more starches than all other carbohydrates combined, glucose represents more than 80 per cent of the final products of carbohydrate digestion, and galactose and fructose each seldom more than 10 per cent.

The major steps in carbohydrate digestion are sum-marized in Figure 65–1.