Development of the Spinal Cord 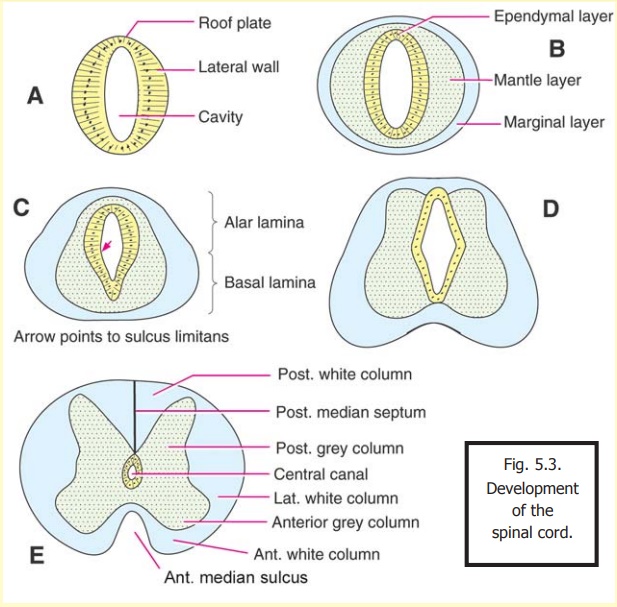 The spinal cord is developed from the caudal cylindrical part of the neural tube.

DEVELOPMENT OF THE SPINAL CORD

The spinal cord is developed from the caudal cylindrical part of the neural tube.

When this part of the neural tube is first formed, its cavity is in the form of a dorsoventral cleft. The lateral walls are thick, but the roof (dorsal), and the floor (ventral), are thin (Fig. 5.3A). The wall of the tube subdivides into the matrix cell or ependymal layer, the mantle layer and the marginal layer (Fig. 5.3B) as already described. 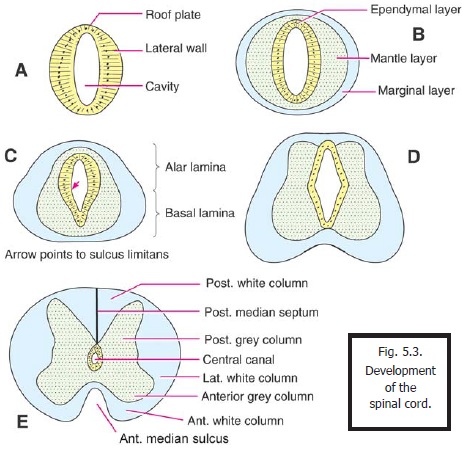 With continued growth in thickness of the mantle layer, the spinal cord gradually acquires its definitive form (Figs. 5.3D, E). With growth of the alar lamina, the dorsal part of the cavity within the cord becomes obliterated: the posterior median septum is formed in this situation. The ventral part of the cavity remains as the central canal. Further enlargement of the basal lamina causes it to project forwards on either side of the midline, leaving a furrow, the anterior median fissure, between the projecting basal laminae of the two sides.

The nerve cells that develop in the mantle zone of the basal lamina become the neurons of theanterior grey column (Fig. 5.4). The axons of these cells grow out of the ventrolateral angle ofthe spinal cord to form the anterior nerve roots of the spinal nerves. The nerve cells that develop in the mantle layer of the alar lamina form the neurons of the posterior grey column. These are sensory neurons of the second order. Their axons travel predominantly upwards in the marginal layer to form the ascending tracts of the spinal cord. Many of these cells form interneurons. 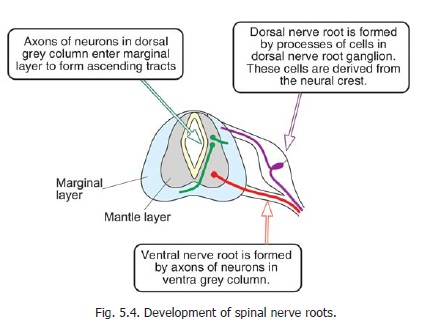 The dorsal nerve roots are formed by the axons of cells that develop from the neural crest (Fig. 5.4). Groups of these cells collect on the dorsolateral aspect of the developing spinal cord to form the dorsal nerveroot ganglia (or spinal ganglia). Theaxons of these cells divide into two. The central processes migrate towards the spinal cord, and establish contact with the dorsolateral aspect of the latter, thus forming the dorsalnerve roots. Theseaxons finally synapse with neurons of the pos-terior grey column developing in the alar lamina. The peripheral processes of the cells of the dorsal nerve root ganglia grow outwards to form the sensory components of the spinal nerves.

The phenomenon of recession of the spinal cord has already been discussed.