A manager alone cannot perform all the tasks assigned to him. In order to meet the targets, the manager should delegate authority. Delegation of Authority means division of authority and powers downwards to the subordinate.

Authority - in context of a business organization, authority can be defined as the power and right of a person to use and allocate the resources efficiently, to take decisions and to give orders so as to achieve the organizational objectives. Authority must be well- defined. All people who have the authority should know what is the scope of their authority is and they shouldn’t misutilize it. Authority is the right to give commands, orders and get the things done. The top level management has greatest authority. Authority always flows from top to bottom. It explains how a superior gets work done from his subordinate by clearly explaining what is expected of him and how he should go about it. Authority should be accompanied with an equal amount of responsibility. Delegating the authority to someone else doesn’t imply escaping from accountability. Accountability still rest with the person having the utmost authority.

The steps involved in delegation are given below 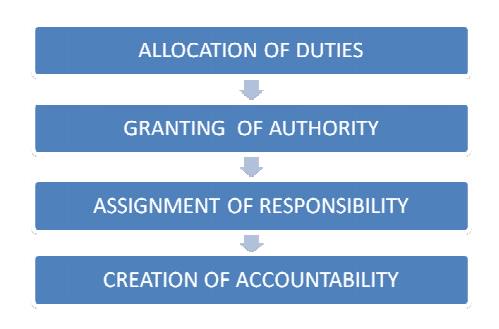 Granting of authority – Subdivision of authority takes place when a superior divides and shares his authority with the subordinate. It is for this reason; every subordinate should be given enough independence to carry the task given to him by his superiors. The managers at all levels delegate authority and power which is attached to their job positions. The subdivision of powers is very important to get effective results.

Assigning of Responsibility and Accountability – The delegation process does not end once powers are granted to the subordinates. They at the same time have to be obligatory towards the duties assigned to them. Responsibility is said to be the factor or obligation of an individual to carry out his duties in best of his ability as per the directions of superior. Therefore, it is that which gives effectiveness to authority. At the same time, responsibility is absolute and cannot be shifted.

Therefore every manager, i.e., the delegator has to follow a system to finish up the delegation process. Equally important is the delegatee’s role which means his responsibility and accountability is attached with the authority over to here.