Data anomalies are inconsistencies in the data stored in a database as a result of an operation such as update, insertion, and/or deletion.

Data anomalies are inconsistencies in the data stored in a database as a result of an operation such as update, insertion, and/or deletion.

Such inconsistencies may arise when have a particular record stored in multiple locations and not all of the copies are updated.

We can prevent such anomalies by implementing 7 different level of normalization called Normal Forms (NF) We’ll only look at the first three.First Normal Form (1NF)

The requirements to satisfy the 1st NF:

Each table has a primary key: minimal set of attributes which can uniquely identify a record

The values in each column of a table are atomic (No multi-value attributes allowed). There are no repeating groups: two columns do not store similar information in the same table

l        This table is not very efficient with storage.

l        This design does not protect data integrity.

l     Second, our subject field contains more than one piece of information. With more than one value in a single field, it would be very difficult to search for all books on a given subject 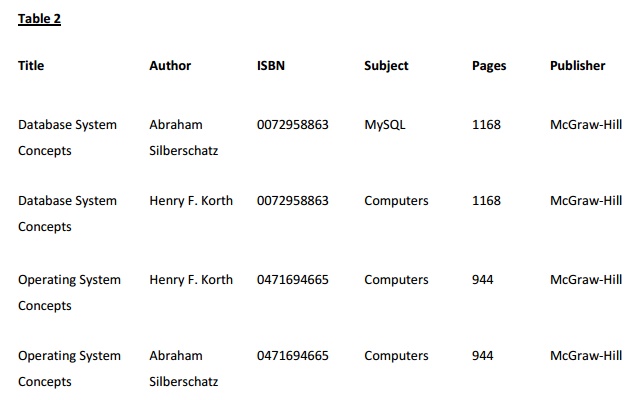 l        We now have two rows for a single book. Additionally, we would be violating the Second Normal Form…

l        A better solution to our problem would be to separate the data into separate tables- an Author table and a Subject table to store our information, removing that information from the Book table:

l        Each table has a primary key, used for joining tables together when querying the data. A primary key value must be unique with in the table (no two books can have the same ISBN number), and a primary key is also an index, which speeds up data retrieval based on the primary key.

l        Now to define relationships between the tables

1.    where a key has more than one attribute, check that each non-key attribute depends on the whole key and not part of the key

2.    for each subset of the key which determines an attribute or group of attributes create a new form. Move the dependant attributes to the new form.

4.    Mark the part key as a foreign key in the original form.

If each attribute A in a relation schema R meets one of the following criteria:

It must be in first normal form.

It is not partially dependent on a candidate key.

Every non-key attribute is fully dependent on each candidate key of the relation. Second Normal Form (or 2NF) deals with redundancy of data in vertical columns.

Here is a list of attributes in a table that is in First Normal Form:

Project_Name and Employee_Name are the candidate key Project_Manager are partially depend on the Employee_Name, Therefore, this table will not satisfy the Second Normal Form

So now we have three tables:

Now, the Department table will only have the candidate key left.

A relation R is in Third Normal Form (3NF) if and only if it is:

Every non-key attribute is non-transitively dependent on the primary key.

An attribute C is transitively dependent on attribute A if there exists an attribute B such that A ->  B and B  -> C, then A  -> C.

Here is the Second Normal Form of the table for the invoice table:

It violates the Third Normal Form because there will be redundancy for having multiple invoice number for the same customer. In this example, Jones had both invoice 1001 and 1003.

To solve the problem, we will have to have another table for the Customers

By having Customer table, there will be no transitive relationship between the invoice number and the customer name and address. Also, there will not be redundancy on the customer information

There will be more examples for the First, Second, and Third Normal Forms.

The following is the example of a table that change from each of the normal forms.

A FD X! Y is preserved in a relation R if R contains all the attributes of X and Y.

Why Do We Preserve The Dependency?

        We would like to check easily that updates to the database do not result in illegal relations being created.

        It would be nice if our design allowed us to check updates without having to compute natural joins.

 A decomposition D = {R1, R2, ..., Rn} of R is dependency-preserving with respect to F if the union of the projections of F on each Ri in D is equivalent to F; that is 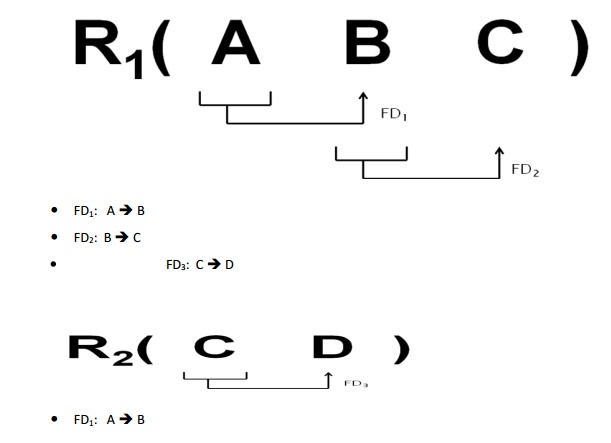 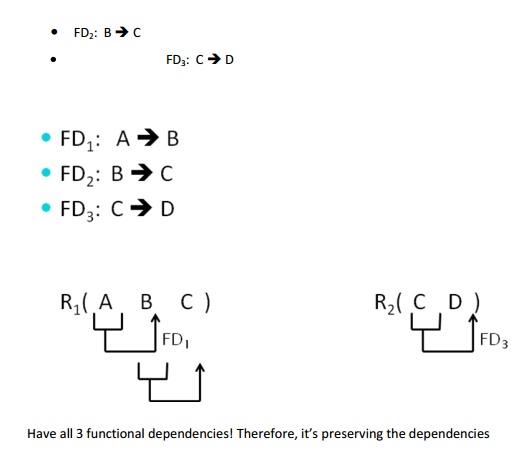 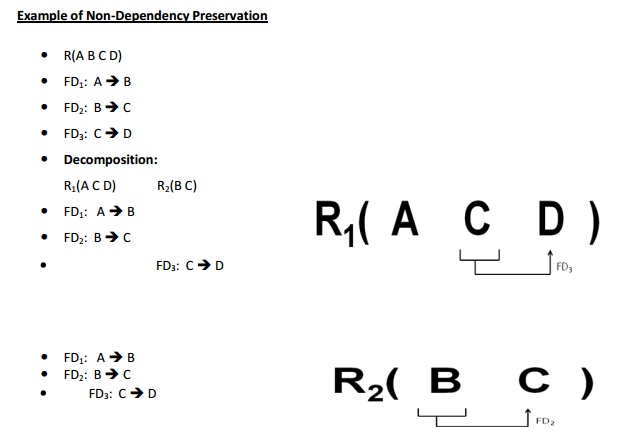 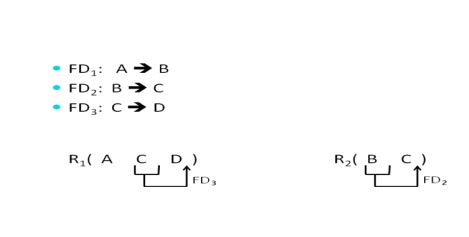 Stream has been put into BCNF but we have lost the FD {Student, Course}

•         Lossless: Data should not be lost or created when splitting relations up

•         Dependency preservation: It is desirable that FDs are preserved when splitting relations up

•         Normalisation to 3NF is always lossless and dependency preserving

•         Normalisation to BCNF is lossless, but may not preserve all dependencies 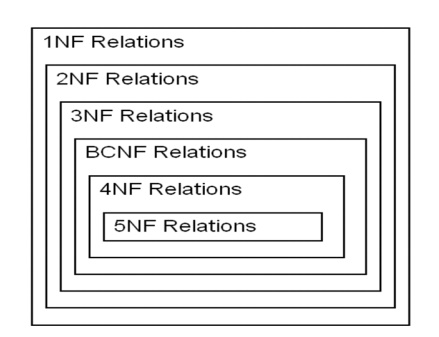 1.    The determinant, Offering#, becomes part of the key and the dependant attribute T_Code, becomes a non key attribute. So the Dependency diagram is now

2.    There are problems with this structure as T_Code is now dependant on only part of the key. This violates the rules for 2NF, so the table needs to be divided with the partial dependency becoming a new table. The dependencies would then be

3. The original table is divided into two new tables. Each is in 3NF and in BCNF. 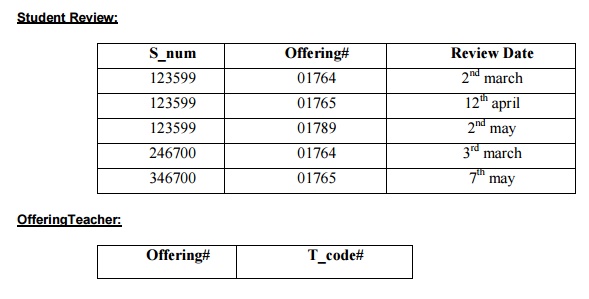 Note that even relations in BCNF can have anomalies.

INSERT: We cannot record the city for a supplier_no without also knowing the supplier_name

DELETE: If we delete the row for a given supplier_name, we lose the information that the supplier_no is associated with a given city.

UPDATE: Since supplier_name is a candidate key (unique), there are none.

A multivalued dependency is a full constraint between two sets of attributes in a relation.

A dependency which explicitly requires certain tuples to be present in the relation.

Let R be a relation schema and let and . The multivalued dependency α ->> β holds on R if, in any legal relation r(R), for all pairs of tuples t1 and

Ø        A multivalued dependency on R, X ->>Y, says that if two tuples of R agree on all the attributes of X, then their components in Y may be swapped, and the result will be two tuples that are also in the relation.

If we have tuples: 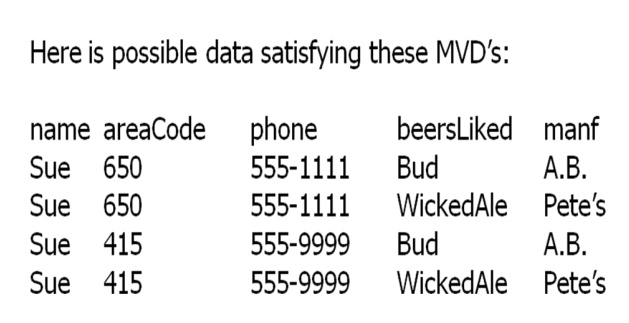 But we cannot swap area codes or phones by themselves. That is, neither name->->areaCode nor name->->phone holds for this relation.

– If X ‐>Y, then swapping Y ’s between two tuples that agree on X doesn’t change the tuples.

• Definition of keys depend on FDs and not MDs.

n        Requires that other tuples of a certain form be present in the relation.

We can use multivalued dependencies

n        To specify constraints on the set of legal relations.

Ø        there is no multi value dependency in the relation or

Ø        This is best discussed through mathematical notation.

Ø        Recall that a relation is in BCNF if all its determinant are candidate keys, in other words each determinant can be used as a primary key.

Ø     Because relation R has only one determinant (a, b, c), which is the composite primary key and since the primary is a candidate key therefore R is in BCNF.

Now R may or may not be in fourth normal form.

Ø        If R contains no multi value dependency then R will be in Fourth normal form.

In this case R will be in the fourth normal form if b and c dependent on each other.

Ø        In relational databases, many-to-many relationships are expressed through cross-reference tables.

Note about FDs and MVDs

Every Functional Dependency is a MVD

Ø        FDs rule out certain tuples (i.e. if A ® B then two tuples will not have the same value for A and different values for B)

Ø     MVDs do not rule out tuples. They guarantee that certain tuples must exist

n        As an example of the anomalies that can occur, realize that it is not possible to add a new class taught by some teacher without adding at least one student who is enrolled in this class.

n        To achieve 4NF, represent each independent many-to-many relationship through its own cross-reference table.

Languages and Skills are dependent.

This says an employee speak several languages and has several skills. However for each skill a specific language is used when that skill is practiced

Thus employee 100 when he/she teaches speaks English but when he cooks speaks French. This relation is in fourth normal form and does not suffer from any anomalies. 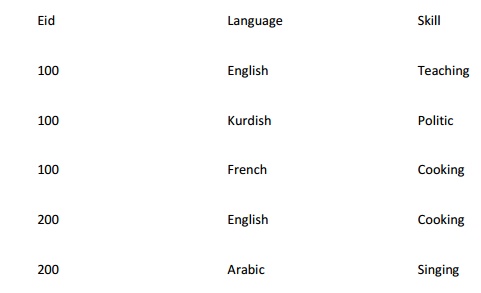 Languages and Skills are independent. 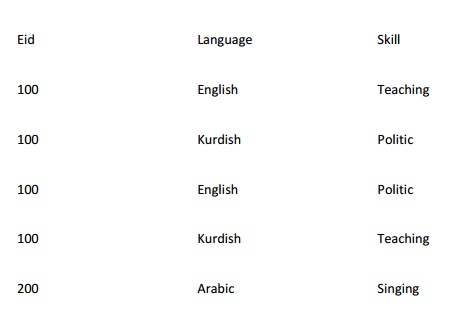 Insertion anomaly: To insert row (200 English Cooking) we have to insert two extra rows (200 Arabic cooking), and (200 English Singing) otherwise the database will be inconsistent. Note the table will be as follow: 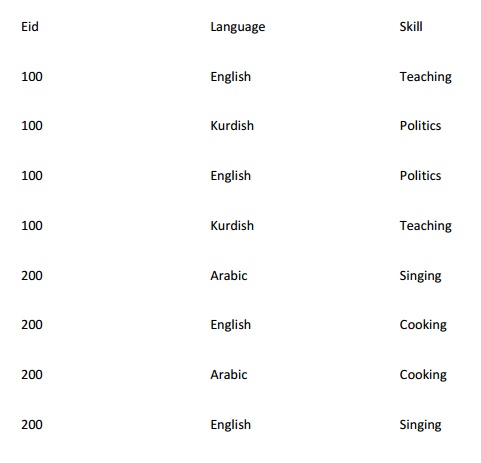 Deletion anomaly: If employee 100 discontinues politic skill we have to delete two rows:  (100 Kurdish Politic), and (100 English Politic) otherwise the database will be inconsistent. 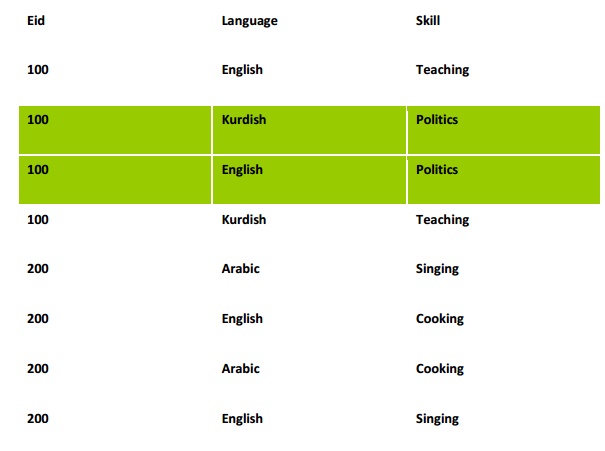 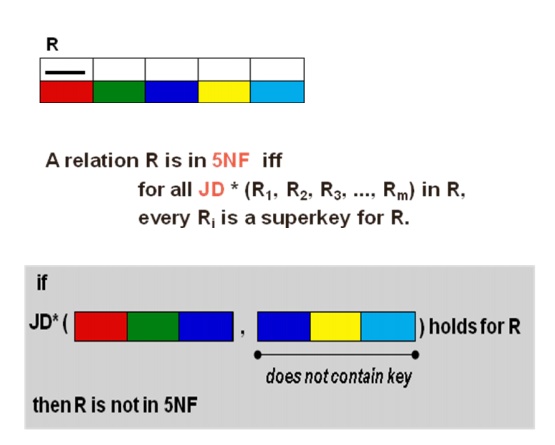 Problems in bringing a relation to 5NF

w        check whether all JDs are implied by the candidate keys

§       Fagin : provides an algorithm for doing this for any relation, given all its JDs and all candidate keys

§       they do not have that intuitive meaning as FDs or MVDs

w        Implies that relations that have been decomposed in previous normal forms can be recombined via natural joins to recreate the original relation.

Only in rare situations does a 4NF table not conform to 5NF. These are situations in which a complex real-world constraint governing the valid combinations of attribute values in the 4NF table is not implicit in the structure of that table. If such a table is not normalized to 5NF, the burden of maintaining the logical consistency of the data within the table must be carried partly by the application responsible for insertions, deletions, and updates to it; and there is a heightened risk that the data within the table will become inconsistent. In contrast, the 5NF design excludes the possibility of such inconsistencies. 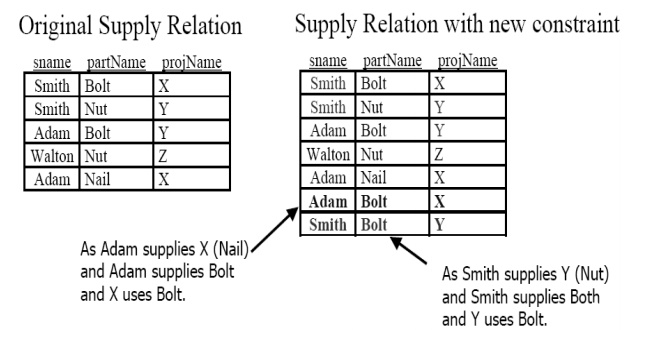 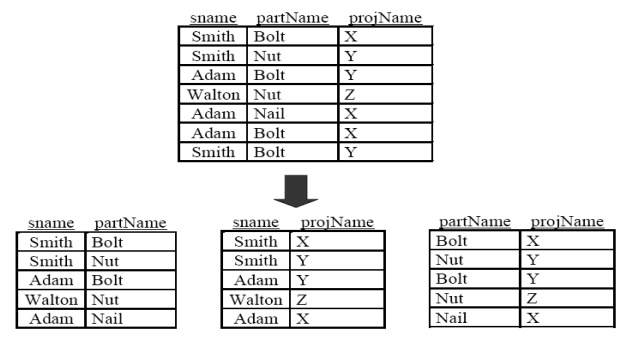 Let R be in BCNF and let R have no composite keys. Then R is in 5NF

Note: That only joining all three relations together will get you back to the original relation. Joining any two will create spurious tuples!