A characteristic of the database approach is that it provides a level of data abstraction, by hiding details of data storage that are not needed by most users.

A characteristic of the database approach is that it provides a level of data abstraction, by hiding details of data storage that are not needed by most users.

A data model is a collection of concepts that can be used to describe the structure of a database. The model provides the necessary means to achieve the abstraction.

The structure of a database is characterized by data types, relationships, and constraints that hold for the data. Models also include a set of operations for specifying retrievals and updates.

Data models are changing to include concepts to specify the behaviour of the database application. This allows designers to specify a set of user defined operations that are allowed.

Data models can be categorized in multiple ways.

Physical data models –provide concepts that describe the details of how data is stored in the computer. These concepts are generally meant for the specialist, and not the end user.

Representational data models –provide concepts that may be understood by the end user but not far removed from the way data is organized.

Conceptual data models use concepts such as entities, attributes and relationships.

Attribute - represents property of interest that describes an entity, such as name or salary. 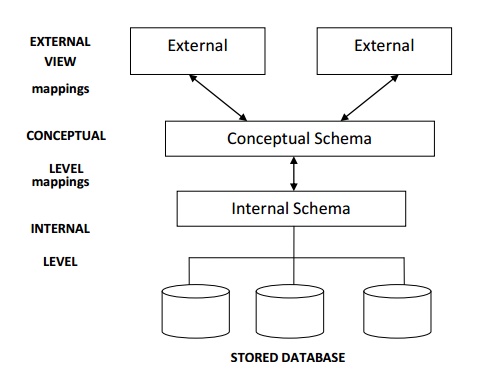 The goal of the three schema architecture is to separate the user applications and the physical database. The schemas can be defined at the following levels:

2.     The conceptual level –has a conceptual schema which describes the structure of the database for users. It hides the details of the physical storage structures, and concentrates on describing entities, data types, relationships, user operations and constraints. Usually a representational data model is used to describe the conceptual schema.

3.     The External or View level –includes external schemas or user vies. Each external schema describes the part of the database that a particular user group is interested in and

hides the rest of the database from that user group. Represented using the representational data model.

The three schema architecture is used to visualize the schema levels in a database. The three schemas are only descriptions of data, the data only actually exists is at the physical level.

•  Deals with physical storage of data

•         Abstractions are used to remove unnecessary details of the internal level

•         Used by DBAs and application programmers

•         Mappings translate information from one level to the next 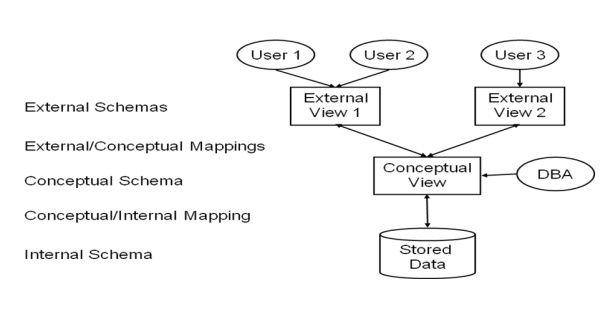