A yeast other than Saccharomyces cerevisiae is also widely studied. This is Schizosaccharomyces pombe, schizo meaning divide, and pombe an African word for beer.

A yeast other than Saccharomyces cerevisiae is also widely studied. This is Schizosaccharomyces pombe, schizo meaning divide, and pombe an African word for beer. These are rod-shaped cells that elongate and divide by fission into two equal-sized cells, in contrast to budding. Some of the processes like mRNA splicing in S. pombe are more similar to those found in higher eukaryotic cells than the corresponding functions in S. cerevisiae.

The two mating types in S. pombe are called P for plus, and M, for minus. The mating-type conversion occurs by transposition of copies of genetic information derived from reference locations, mat2 and mat3, into the expression locus mat1, much like that found in S. cerevisiae.

The pedigree of switching is much different between the two yeasts, however. Instead of mother and daughter switching together as in S.cerevisiae, only a single sister switches in pombe. That is, only one offour granddaughters of an originally unswitchable Pu cell switches (Fig. 16.16). 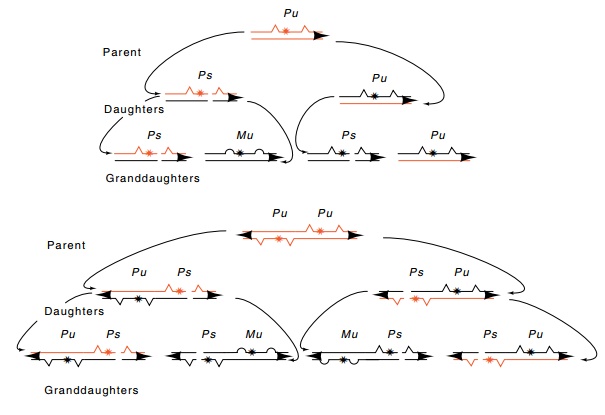 Figure 16.17 A strand marking mechanism of determining the developmentalfate of daughter cells. The two cell types are denoted by M and P with curved and angular symbols. Switchable and unswitchable are indicated by s and u.

What mechanism directs just one of the two sisters of a Ps cell to switch? We might expect that some molecule in the cytoplasm or nucleus is unequally expressed, distributed, or stabilized in the two daughters, and therefore controls their different behavior. Instead, the marking system appears to use strand-specific marking of the DNA. One of the strands in a Pu is marked. After replication, only the chromatid inheriting the marked strand is cleaved. This cell is then competent to switch and is denoted Ps, and it produces one switched sister in the next generation.

An elegant experiment led to the proposal of the strand marking mechanism. A strain was constructed to contain an inverted duplication of mat1 (Fig. 16.17). Thus, each of the two strands of the DNA duplex contain a copy of the site that is marked for eventual cutting. Hence, in the Pu cell, both strands are marked, and both sister cells derived from the cell should be switchable, and indeed, both are. Southern blot analysis to quantitate the level of cleavage also fits expectations. Thus, for S. pombe, inheritance of parental DNA strands, which are comple-mentary and not identical, confers developmental asymmetry to daughter cells.