DNA Cleavage at the MAT Locus

A key step in the shifting of mating type is the transfer of the genetic information from HML and HMR to MAT.

DNA Cleavage at the MAT Locus

A key step in the shifting of mating type is the transfer of the genetic information from HML and HMR to MAT. Apparently the transfer is initiated by cleaving the DNA at the MAT locus. A specific endonuclease, much like a restriction enzyme, could generate a double-stranded break in DNA at the MAT locus. How could such an enzyme be sought? Restriction enzymes can be detected by their cleavage of DNA, such as lambda phage or plasmid DNA. If the mating-type endonuclease is specific, then only DNA carrying the MAT locus and possibly the HML and HMR loci would be substrates. Also, the enzyme generating the cleavages should be found in haploid HO yeast but probably would not be found in ho or in diploid yeast since these latter types do not switch mating type.

A particularly sensitive assay was used to search for the predicted cleavage (Fig. 16.14). A plasmid containing the mating-type region was cut and end-labeled with 32PO4. Incubation of this DNA with extracts prepared from various yeast strains should cut the DNA somewhere within the MAT locus. Such cleavage would generate a smaller radioac-tive fragment which could be detected on electrophoresis of the diges-tion mixture and autoradiography. As expected, HO haploids contain a cleaving activity, and, furthermore, this activity is present at only one part of the cell cycle, just before the period of DNA synthesis. Using this cleavage assay, the enzyme has been partially purified, and biochemical studies on it are now possible.

Figure 16.14 A sensitive scheme for detecting an endonuclease that cleavesspecifically in MAT sequences.

The site of DNA cleavage lies just within the MAT locus. Some of the mutations that act in cis to prevent the normal high frequency of mating-type conversion do not generate the double-stranded break invivo. Most likely they prevent binding or cleavage by the HO nuclease,and, as expected, they prevent cleavage in vitro. As is typical for most restriction enzyme cleavage sites, these changes lie within 10 base pairs of the cleavage site.

The HO endonuclease is particularly unstable. Presumably this re-sults from the requirement that any cleavage that is to generate a mating-type switch must be made in a narrow window of time. The regulation of the synthesis of HO messenger RNA also must be tight. Apparently a sizeable number of proteins are involved in this regulation. A region of DNA preceding the HO gene of over a thousand nucleotides and about fifteen different proteins seem to be involved.

Figure 16.15 The pattern ofmating type switching in HO S.cerevisiae. The star indicatesthat the mother cell will switch mating type in the next genera-tion. Red indicates a switch. 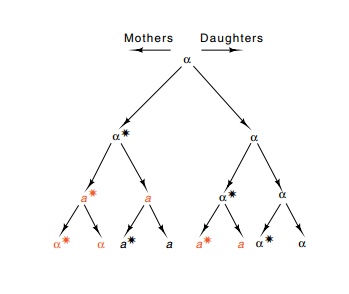 In HO cells the pattern of mating-type conversion is fixed. Only in a cell that has produced at least one daughter, called a mother cell, does a mating-type conversion occur (Fig. 16.15). At this time both the mother and daughter convert. The complex set of proteins that regulate HO protein expression also compute this cell lineage and permit expres-sion of the HO gene only in the mother and not in first-born daughters.