If proteins repress expression of genes located in HML and HMR, then mutations in such repressor proteins should permit expression of mat-ing-type information from these loci. Such mutant cells could behave as a/α diploids since they would express both a and α mating-type information simultaneously if they had the two types of mating infor - mation at HML and HMR. As a result, they would be sterile for mating. Such mutants have been found. A second approach to isolation of repression negative mutants is to begin with cells that are HMLα-MATa- 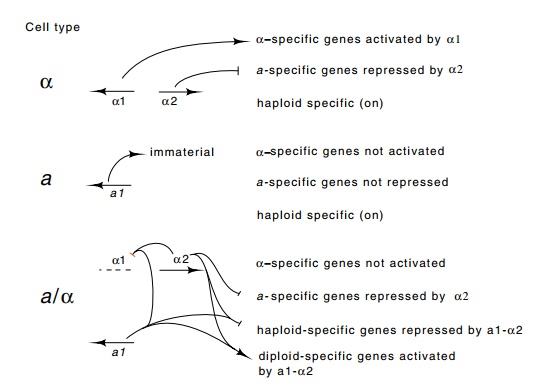 -HMRα (Fig. 16.9). Even though such cells express no active mating-type information, they are of a mating type by default. Now, if a mutant loses the ability to repress at the HML or HMR loci, then that cell becomes α mating type. 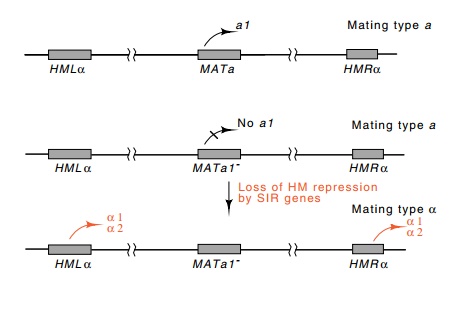 Figure 16.9 Cells can be made to switch mating type with the loss of repressionat HM loci if they possess an a1- allele at MAT and cannot transfer copies from HML or HMR to MAT. As a result they switch from constitutively expressing a type genes to repressing these genes and expressing genes activated by α1. 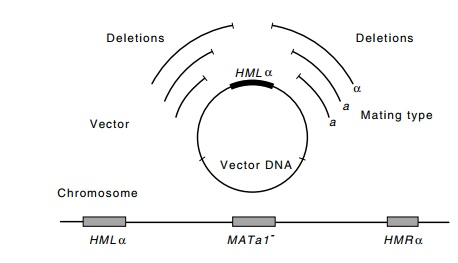 Figure 16.10 Yeast of the genotype shown containing a vector carryingHMLαare a mating type unless a deletion enters the region necessary for repression of expression from HMLα.

Cells possessing the necessary genotype were mutagenized and colo-nies were screened for a shift from a to α mating type. This was a simple replica plating assay for mating ability. Amongst the large number of candidates screened, four repressor genes turned up. These are called the MAR or SIR genes. The existence of these genes and the behavior of strains mutant in these genes proves that repression prevents expression of mating-type genes at the HML and HMR loci.

The next question that can be asked about repression of the mating-type information is where are the DNA sites that are required to generate the repression? These must lie in the DNA sequences unique to the HML and HMR loci, for otherwise the repressor SIR genes would repress mating-type information at MAT as well. Precisely where they lie could be found by deletion mapping. This was most easily done by placing an entire HML or HMR region on a yeast shuttle vector which could be introduced into yeast possessing essentially the same genotype as de-scribed above (Fig. 16.10). A deletion that eliminates repression of HMLαshifts the cell’s mating type from a toα. Such sites lie on bothsides of HML and both sides of HMR. Currently the best guess as to the mechanism of action of silencing is that MAR or SIR gene products, histone, and other proteins organize the HM loci chromatin such that they are inaccessible to RNA polymerase but accessible for interaction with the MAT locus for gene conversion.