In principle, three chemicals whose concentrations varied in the x, y, and z directions would be sufficient to specify every important location in a developing organism.

In principle, three chemicals whose concentrations varied in the x, y, and z directions would be sufficient to specify every important location in a developing organism (Fig. 17.1). After determining its position, any cell could induce or repress the genes appropriate to its position. 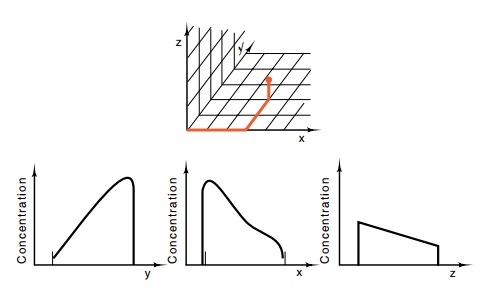 Generating a simple coordinate system in which the locations of points are determined by the concentrations of three chemicals presents several problems. The first is simply creating the gradients. How are gradients to be built? The embryo cannot leave it to chance that an appropriate cell will start off the process of building a gradient, perhaps by synthesizing and secreting some compound. Therefore, either certain cells are special as a result of their lineage and they will set up the gradients, or an external influence directs some of the cells in the embryo to behave differently from the rest. In either case, the embryo develops an asymmetry, and this asymmetry defines an initial direction or directions.

Commonly, at least one external influence or definition of an axis of the developmental coordinate system comes from the mother. The maternal developmental signals must be special. They cannot be intro-duced into the egg during its development if the signal is a freely diffusing molecule. Any gradient in such a molecule would diffuse away before fertilization and embryo development. Therefore maternal ef-fects either must be generated during development or they must be placed in the egg in a way that diffusion cannot alter. Another useable source of asymmetry for an embryo’s coordinate system is the entry point of the fertilizing sperm.

To reach all cells, the chemicals used to specify location in an embryo must be freely diffusible. If the gradients are set up in the egg after it has been subdivided into cells, the chemicals must enter and leave cells freely. This requires that the molecule be small. On the other hand, position might be determined before a fertilized egg has divided into cells. Drosophila operates this way, and the embryo reaches about 4,000 nuclei before cell walls are synthesized. Thus, the morphogens can be proteins.

If many different coordinate positions are to be distinguished along one concentration gradient, precise measurements of the morphogen concentration must be made. The standard biochemical means for measuring concentration are simply measuring the amount of binding of a chemical to a receptor with appropriate affinity (Fig. 17.2). This method is incapable of discerning small differences in the concentration of a substance, but detecting such differences would be necessary if many different developmental cues are to be derived from one gradient. Instead of using a few gradients to determine everything about a 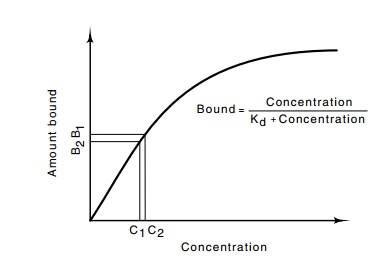 developing embryo, it is more logical that gross patterns are first developed from simple gradients. These can be subdivided as many times as necessary to produce as many different states as are required for the developing embryo (Fig. 17.3).

Figure 17.3 Repeated subdivision of an embryo can generate many areas.

Not only must cells determine where they are in the coordinate system of morphogens, but they must do so crisply. The division lines between different tissues must be sharp. Interpenetration of one tissue into another would generate problems. Therefore we can expect devel-oping organisms to use special techniques to make the division lines sharp. One simple technique is to make decisions when there are as few cells as possible. Another is to use a small embryo, for the smaller the embryo, the steeper the gradients, and therefore the easier it is to make decisions. Once an individual cell has determined what tissue or body part it is to become, it can go through multiple cell divisions to generate as much tissue as necessary. A second general way to make sharp dividing lines in differentiating tissue is to make the processes non-linear. First, let us examine the linear situation. Suppose the decision between becoming tissue of type A or type B depends on the amount of morphogen bound to a protein, and that the binding is described by the

Figure 17.4 The lengths of the red boxes are proportional to the numbers ofcells with indeterminate developmental fates.

standard Michaelis-Menten equation. Further, assume that all cells whose receptors bind less than x1 of the morphogen become cell-type A, and all cells whose receptors bind more than x2 of the morphogen become type B. Cells that bind an intermediate amount of morphogen can become type A or B (Fig. 17.4). A moderate number of cells could exist in this indeterminate position. Suppose instead, that cells use a more complex method of measuring concentration. They could use two receptors and respond to two gradients or respond to a single morpho-gen by requiring that two binding events occur. Then the response of the receptor system could be made to be the product of two Michaelis-Menton curves. This is nonlinear, and the transition between the critical concentrations becomes much shorter. Therefore fewer cells are sub-jected to indeterminate concentrations of morphogen. This principle of making responses depend on multiple sensing systems can be used to make particularly sharp responses. It is analogous to that used by phage lambda in deciding between the lysogenic and lytic responses.

As a result of the general principles mentioned above, we have the following questions concerning developmental systems. What kinds of genes and gene products are involved? How is signaling accomplished? Are there cascades of regulation so that subdivisions are generated within an embryo? Are multiple gradients used in some decision proc - esses so as to make sharp boundaries? Once a cell knows where it is, what happens next to determine its developmental fate?