As in the development of spores of yeast, a single diploid cell in the ovary of a female fly gives rise to a number of haploid cells.

As in the development of spores of yeast, a single diploid cell in the ovary of a female fly gives rise to a number of haploid cells. In Drosophila the precursor cell undergoes four divisions to yield sixteen cells (Fig. 17.5). These are not separated, but retain communication with one another via cytoplasmic bridges. Eventually, one of the two cells with four 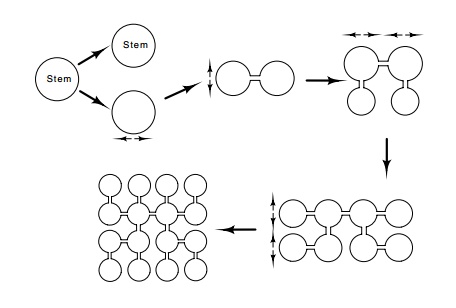 Figure 17.5 Creation of nurse and egg cells from a precursor stem cell in theovary of a Drosophila. The first division of the stem cell yields one cell which remains stem cell type and a daughter cell that will yield nurse and egg cells. Four additional divisions yield a network of interconnected cells.

Figure 17.6 Later stage of egg development showing an egg cell plus nurse cellssurrounded by follicle cells. Although each cell possesses a nucleus and 16 are present, not all nuclei are in the plane of the cross section. The future egg cell is at the far right. At a still later stage of development the egg is enlarging and the nurse cells are found at the left.

Upon fertilization, DNA synthesis begins at a high rate in the egg. Many replication origins are utilized per chromosome so that a chromosome doubling can take as little as ten minutes. The original diploid chromosome doubles ten times, then a few nuclei migrate to the poste-rior pole of the egg where they ultimately become the germ line cells. The remainder of the nuclei migrate to the surface of the egg and divide four more times, yielding a total of about 4,000 nuclei. At this point nuclear membranes and cell walls develop, creating isolated cells. This stage consists of a single layer of cells and is called a blastula.

Up to the time of wall formation, the nuclei are not committed to any developmental fate, for they can be moved to different locations without altering the development of the embryo. After the walls form, the cells are partially committed, and relocating them interferes with normal development. About six hours after fertilization the embryo develops about 14 distinguishable segments. Six of these ultimately fuse to yield the head, three become the thorax, and about eight develop into the abdomen. By 24 hours after fertilization the larva is fully developed.