Although the classical experiments with insect embryos indicated the existence of long-range effects, further progress has required new tech-niques.

Although the classical experiments with insect embryos indicated the existence of long-range effects, further progress has required new tech-niques. Genetic approaches are one method for proceeding with a deeper analysis of development. Mutants have the potential for indicat-ing the complexity of a system by revealing the approximate number of genes or gene products involved and the ways in which the system can fail. Recently, molecular genetics has greatly streamlined the process of obtaining and studying mutants and genes involved in the development process.

How can maternal lethal or embryonic lethal mutations be isolated and studied? Certainly the technology is not as simple as mutagenizing bacteria and providing leucine as they grow, and then identifying those colonies that require leucine for growth. Nonetheless, the operations are not particularly complicated either. Two problems must be solved. The first is handling the diploid chromosomes. Most likely defects will be lethal. Since dominant lethal mutants cannot be propagated, the mutants which can be propagated and studied must be recessive. Recessive lethals can be generated as long as the homologous chromo-some does not carry the mutation. Whenever the mutation is to be detected or to be studied, both chromosomes must carry the mutation. The second problem is preventing recombination between homologous chromosomes. Due to the absence of the necessary mutants, this cannot be done simply by using a recombination deficient Drosophila. 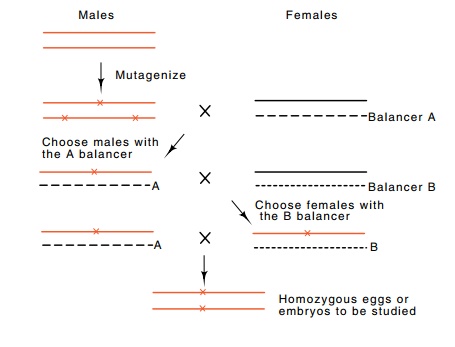 Figure 17.7 Scheme for isolating and studying maternal and embryonic lethalmutations. A mutagenized male is mutated with a female carrying a genetically marked balancer chromosome, indicated by B. The genotypes of subsequent offspring can be easily identified and ultimately, a homozygous female can be generated.

The general conclusions from these genetic experiments are that a relatively small number of genes are required for spatial development in Drosophila. Many of the genes exert a strong effect over a sizeable portion of the embryo. Three groups of maternal effect mutations have been found: anterior, which lack head and thoracic structures; terminal, which lack structures at both ends; and posterior, which lack posterior structures. Among the mutations affecting anterior structures was the mutation known as bicoid. Embryos carrying this mutation behave similarly to embryos with their anterior cytoplasm removed. They often lack head and thorax structures and replace them with a mirror image of the posterior region. These defects can be complemented by microin-jection with anterior cytoplasm from wild-type embryos. Other muta-tions affecting head and thorax development are the swallow and exuperantia mutations.

Additional classes of mutations that affect embryonic pattern devel-opment independent of maternal effects have also been found. Some of these affect segmentation in the embryo. Mutations in the gene named fushi tarazu have too few segments. Some mutations remove the even or the odd numbered segments, or lack a sizeable block of segments or have segments or regions duplicated.

Developmental genes also act after segmentation. The identities of the segments are determined by homeotic genes. For example, the Antennapedia complex of genes specifies development of part of thethorax, and mutants in this complex may grow legs from the head instead of antennae. The bithorax cluster of homeotic genes studied by Lewis specifies identity of the posterior portion of the thorax and abdomen.