All industries have developed considerable expertise in implementing efficient operational systems such as payroll, inventory tracking, and purchasing. the original objectives in developing an abstract model known as the relational model

All industries have developed considerable expertise in implementing efficient operational systems such as payroll, inventory tracking, and purchasing. the original objectives in developing an abstract model known as the relational model

The relational model is based on mathematical principals. The existing relational database management ( RDBMSs) offer power full solution for a wide variety of commercial and scientific applications

For solving modern business problems such as market analysis and financial forecasting requires query-centric database schemas that are array oriented and multidimensional in nature.

A star schema created for every industry

It improve the performance in the star schema design

The table in star schema design contain the entire hierarchy of attributes(PERIOD dimension this hierarchy could be day->week->month->quarter->year),one approach is to create multi part key of day, week, month ,quarter ,year .it presents some problems in the star schema model because it should be in normalized

Since the fact table must carry all key components as part of its primary key, addition or deletion of levels in the physical modification of the affected table.

Carrying all the segments of the compound dimensional key in the fact table increases the size of the index, thus impacting both performance and scalability.

One alternative to the compound key is to concatenate the key into a single key for the attributes (day, week, month, quarter, year) this is used to solve the first above two problems.

The index is remains problem the best approach is to drop the use of meaningful keys in favor of using an artificial, generated key which is the smallest possible key that will ensure the uniqueness of each record

Another potential problem with the star schema design is that in order to navigate the dimensions successfully.

The dimensional table design includes a level of hierarchy indicator for every record.

Every query that is retrieving detail records from a table that stores details & aggregates must use this indicator as an additional constraint to obtain a correct result.

Other problems with the star schema design:

The next set of problems is related to the relational DBMS engine & optimization technology.

The traditional OLAP RDBMS engines are not designed for the set of complex queries that can be issued against a star schema.

Many OLTP RDBMS can join only two tables, so the complex query must be in the RDBMS needs to break the query into series of pairwise joins. And also provide the intermediate result. this process will be do up to end of the result

Thus intermediate results can be large & very costly to create. It affects the query performance. The number of ways to pairwise join a set of N tables is N!( N factorial) for example.

Because the number of pairwise join combinations is often too large to fully evaluate many RDBMS optimizers limit the selection on the basis of a particular criterion. In data warehousing environment this strategy is very inefficient for star schemas.

In a star schema the only table directly related to most other tables in the fact table this means that the fact table is natural candidate for the first pairwise join.

A common optimization provides some relief for the star schema join problem.

The basic idea of this optimization is to get around the pairwise join strategy of selecting only related tables.

When two tables are joined and no columns ―link‖ the tables every combination of two tables’ rows are produced. In terms of relational algebra this is called a Cartesian product.

Alternatively it is a Cartesian product of all dimension tables is first generated.

A  STARjoin  is  a  high-speed,  single-pass,  parallelizable  multitable  joins,  and  Brick’s

RDBMS can join more than two tables in a single operation.

Red Brick’s RDBMS supports the creation of specialized indexes called STARindexes. it created on one or more foreign key columns of a fact table.

The new approach to increasing performance of a relational DBMS is to use innovative indexing techniques to provide direct access to data. SYBASE IQ uses a bit mapped index structure. The data stored in the SYBASE DBMS.

5.1 SYBASE IQ- it is based on indexing technology; it is a stand alone database.

Overview: It is a separate SQL database. Data is loaded into a SYBASE IQ very much as into any relational DBMS once loaded SYBASE IQ converts all data into a series of bitmaps which are than highly compressed to store on disk.

The each distinct value has its own bitmap index consisting of a bit for every row in a table, if the bit for a given index is ―on‖ the value exists in the record bitmap index representation is a 10000 bit long vector which has its bits turned on(value of 1) for every record that satisfies ―gender‖=‖M‖ condition‖

Another solution is to use traditional B_tree index structure. B_tree indexes can often grow to large sizes because as the data volumes & the number of indexes grow. 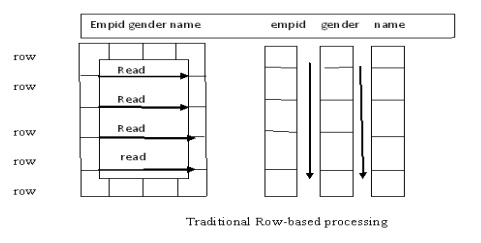 the default index called projection index and other is either a low or high – cardinality index. For low cardinality data SYBASE IQ provides.

Low disk index which is optimized for disk space utilization at the cost of being more CPU-intensive.

Optimized m/y based programming: SYBASE IQ caches data columns in m/y according to the nature of user’s queries, it speed up the processor.

Columnwise processing: SYBASE IQ scans columns not rows, it reduce the amount of data. the engine has to search.

Low overhead: An engine optimized for decision support SYBASE IQ does not carry on

Large block I/P: Block size of SYBASE IQ can turned from 512 bytes to 64 Kbytes so system can read much more information as necessary in single I/O.

Projection and ad hoc join capabilities: SYBASE IQ allows users to take advantage of known join relation relationships between tables by defining them in advance and building indexes between tables.

No updates-SYNBASE IQ does not support updates .the users would have to update the source database and then load the update data in SYNBASE IQ on a periodic basis.

Lack of core RDBMS feature:-Not support all the robust features of SYBASE SQL server, such as backup and recovery

For example thinking machine operation has developed an innovative data layout solution that improves RDBMS query performance many times. Implemented in its CM_SQL RDBMS product, this approach is based on storing data columnwise as opposed to traditional row wise approach.

In figure-.(Row wise approach) This approach works well for OLTP environment in which a typical transaction accesses a record at a time. However in data warehousing the goal is to retrieve multiple values of several columns.

For example if a problem is to calculate average minimum, maximum salary the columnwise storage of the salary field requires a DBMS to read only one record.(use Column –wise approach) 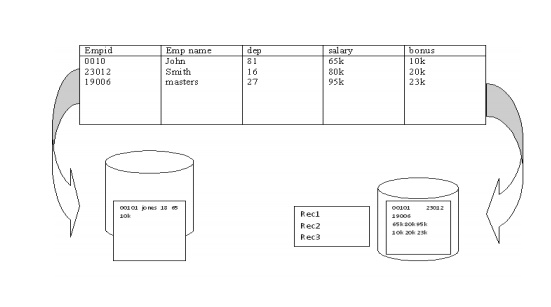 The best DBMS architecture for data warehousing has been limited to traditional alphanumeric data types. But data management is the need to support complex data types , Include text, image, full-motion video &sound.

The ability to retrieve the complex data type like an image by its content. The ability to compare the content of one image to another in order to make rapid business decision and ability to express all of this in a single SQL statement.