Chapter: Civil : Principles of Solid Mechanics : Wedges and the Half-Space

A powerful method to determine corner effects was developed by Brahtz and is presented in a somewhat simpler form by Silverman.

The full-field analytic solutions shown in Figures 8.13 and 8.14 were obtained by including both foundation and corner effects. Once the stresses along the base are determined, the known solution for distributed normal and shearing strip loads on the half-space can be combined to determine the stresses in the foundation to any degree of accuracy using the incremental superposition of different load levels as discussed in Section 8.4.

A powerful method to determine corner effects was developed by Brahtz and is presented in a somewhat simpler form by Silverman. Later, Silverman, following the initial work of Jacobson, obtained closely similar results by using a variational method. However, the eigenfunction strategy introduced by Brahtz has the advantage of yielding a stress function that can be directly superimposed with any of those already derived for a semi-infinite wedge.*

Let us apply this to the gravity dam shape shown in Figure 8.12. Considering either the upstream, U, or downstream, D, corner of the finite wedge redrawn in Figure 8.14a, a stress function can be found that will, while excluding body and surface forces, only affect the internal stress distribution. Assuming a gen-eral stress function of the type 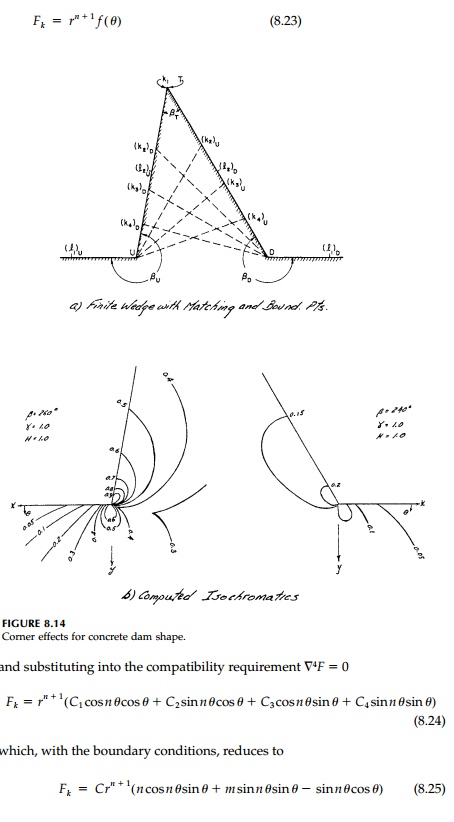 The eigenvalues of n that satisfy Equation (8.25) must now be determined. For the corners to be considered, π<β<2π and there are two real roots, n0 and n1, and an infinite number of complex roots. The real roots can be found by direct substitution. The complex roots are found by letting nk = ak + ibk and determining ak and bk by trial and error. Thus, except for an arbitrary constant, C, the quantities in Equation (8.25) can be determined for the given corner angle β for each k = 1,2,3… Hence, as a final step, the corner stress function may be written as an infinite series in k, with each term multiplied by an unknown complex constant. Thus

in which, m = cotβ - n cot nβ, and Ck = Ak + iBk. The constants Ak and Bk can then be found as indicated in Figure 8.14a from conditions at specific points on boundaries opposite from the corner or from other known stress stipula-tions necessary to provide a match with semi-infinite wedge results.

The stress field in the vicinity of the upstream and downstream corners given by this eigenfunction solution are shown in Figure 8.14b. The stress concentra-tion for the upstream wedge angle β =  260o is intense and is correct judging by the photo elastic isochromatics in Figure 8.12.

The actual procedure of combining the self-equilibrating corner effects from the eigenfunction with those from the actual wedge loading involves matching conditions and requires a computer.* However, it should be noted that since F(β) is so constituted that it only redistributes stresses, it is useful not only in investigating corners and boundary lines different from those origi-nally assumed, but also in considering the effects of cracks or zones of plas-ticity where limiting stresses can be specified as matching conditions.