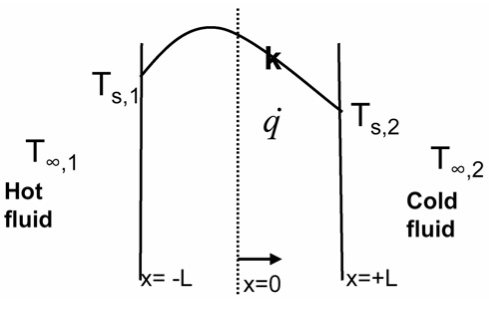 A medium through which heat is conducted may involve the conversion ofmechanical, electrical, nuclear, or chemical energy into heat (or thermal energy).In heat conduction analysis, such conversion processes are characterizedas heat generation.

For example, the temperature of a resistance wire rises rapidly when electriccurrent passes through it as a result of the electrical energy being convertedto heat at a rate of I2R, where I is the current and R is the electricalresistance of the wire The safe and effective removal of this heataway from the sites of heat generation (the electronic circuits) is the subjectof electronics cooling, which is one of the modern application areas of heat transfer.

Likewise, a large amount of heat is generated in the fuel elements of nuclearreactors as a result of nuclear fission that serves as the heat source for the nuclearpower plants. The natural disintegration of radioactive elements in nuclearwaste or other radioactive material also results in the generation of heat throughout the body. The heat generated in the sun as a result of the fusion ofhydrogen into helium makes the sun a large nuclear reactor that supplies heatto the earth.

a negative quantity in this case.

Note that heat generation is a volumetric phenomenon. That is, it occursthroughout the body of a medium. Therefore, the rate of heat generation in amedium is usually specified per unit volume.

reduces to E ·gen _ e · genV, where Egen is the constant rate of heat generation per unit volume.