A major use of computer graphics is in design processes, particularly for engineering and architectural systems, but almost all products are now computer designed. Generally referred to as CAD, computer-aided design methods are now routinely used in the design of buildings, automobiles, aircraft, watercraft, spacecraft, computers, textiles, and many, many other products.

Another major application area is presentation graphics, used to produce illustrations for reports or to generate 35-mm slides or transparencies for use with projectors. Presentation graphics is commonly used to summarize financial, statistical, mathematical, scientific, and economic data for research reports, managerial reports, consumer information bulletins, and other types of reports. Workstation devices and service bureaus exist for converting screen displays into 35-mm slides or overhead transparencies for use in presentations.

Computer graphics methods are widely used in both fine art and commercial art applications. Artists use a variety of computer methods, including special-purpose hardware, artist's paintbrush (such as Lumens), other paint packages (such as Pixelpaint and Superpaint),.

Scientists, engineers, medical personnel, business analysts, and others often need to analyze large amounts of information or to study the behavior of certain processes. Numerical simulations carried out on supercomputers frequently produce data files containing thousands and even millions of data values..

It is common now for software packages to provide a graphical interface. A major component of a graphical interface is a window manager that allows a user to display multiple-window areas. Each window can contain a different process that can contain graphical or nongraphical displays. To make a particular window active, we simply click in that window using an interactive pointing device.Interfaces also display menus and icons for fast selection of processing options or parameter values.

Typically, the primary output device in a graphics system is a video monitor The operation of most video monitors is based on the standard cathode-ray tube (CRT) design.

The basic operation of a CRT A beam of electrons (cathode rays), emitted by an electron gun, passes through focusing and deflection systems that direct the beam toward specified positions on the phosphomted screen. The phosphor then emits a small spot of light at each position contacted by the electron beam. Because the light emitted by the phosphor fades very rapidly, some method is needed for maintaining the screen picture. One way to keep the phosphor glowing is to redraw the picture repeatedly by quickly directing the electron beam back over the same points. This type of display is called a refresh

The most common type of graphics monitor employing a CRT is the raster-scan display, based on television technology.

In a raster-scan system, the electron beam is swept across the screen, one row at a time from top to bottom. As the electron beam moves across each row, the beam intensity is turned on and off to create a pattern of illuminated spots. Picture definition is stored in a memory area called the refresh buffer or frame buffer. This memory area holds the set of intensity values for all the screen points. Stored intensity values are then retrieved from the refresh buffer and "painted" on the screen one row (scan line) at a time .Each screen point is referred to as a pixel or pel (shortened fonns of picture element). The capability of a raster-scan system to store intensity information for each screen point makes it well suited for the realistic displav of scenes containing subtle shading and color patterns.

When operated as a random-scan display unit, a CRT has the electron beam directed only to the parts of the screen where a picture is to be drawn. Randomscan monitors draw a picture one line at a time and for this reason are also referred to as vector displays (or stroke-writing or calligraphic diisplays). The component lines of a picture can be drawn and refreshed by a random-scan system in any specified order

To display a specified picture, the system cycles through the set of commands in the display file, drawing each component line in turn. After all line drawing commands have been processed, the system cycles back to the first line command in the list. Random-scan displays are designed to draw all the component lines of a picture 30 to 60 times each second. High quality vector systems arecapable of handling approximately 100,000 "short" lines at this refresh rate. When a small set of lines is to be displayed, each rrfresh cycle is delayed to avoid refresh rates greater than 60 frames per second. Otherwise, faster refreshing of the set of lines could bum out the phosphor. 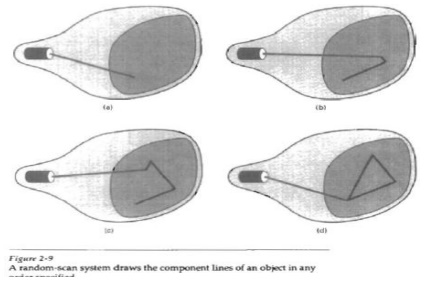 1.     A picture can be described in several ways. In raster display, a picture is completely specified by the set of intensities for the pixel positions in the display. At the other extreme, we can describe a picture as a set of complex objects, such as trees and terrain or furniture and walls, positioned at specified coordinate locations within the scene.

2.     Shapes and colors of the objects can be described internally with pixel arrays or with sets of basic geometric structures, such as straight line segments and polygon color areas. The scene is then displayed either by loading the pixel arrays into the frame buffer or by scan converting the basic geometric-structure specifications into pixel patterns.

1 Point plotting is accomplished by converting a single coordinate position furnished by an application program into appropriate operations for the output device in use.

The formula for the point to be plotted is putpixel(x,y,color)