Chapter: Biochemistry: The Importance of Energy Changes and Electron Transfer in Metabolism

Coenzyme A in Activation of Metabolic Pathways 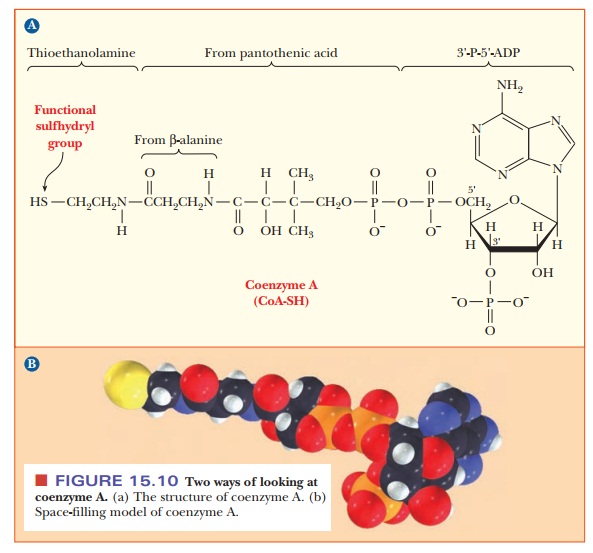 Why is coenzyme A such a good example of activation?

Coenzyme A in Activation of Metabolic Pathways

Why is coenzyme A such a good example of activation?

A step frequently encountered in metabolism is the process of activation. In a reaction of this sort, a metabolite (a component of a metabolic pathway) is bonded to some other molecule, such as a coenzyme, and the free-energy change for breaking this new bond is negative. In other words, the next reaction in the metabolic pathway is exergonic. For example, if substance A is the metabolite and reacts with substance B to give AB, the following series of reactions might take place:

The formation of a more reactive substance in this fashion is called activation. There are many examples of activation in metabolic processes. We can dis-cuss one of the most useful examples now. It involves forming a covalent bond to a compound known as coenzyme A (CoA).

The structure of CoA is complex. It consists of several smaller components linked together covalently (Figure 15.10). One part is 3'-P-5'-ADP, a derivative of adenosine with phosphate groups esterified to the sugar, as shown in the structure. Another part is derived from the vitamin pantothenic acid, and the part of the molecule involved in activation reactions contains a thiol group. In fact, coenzyme A is frequently written as CoA-SH to emphasize that the thiol group is the reactive portion of the molecule. For example, carboxylic acids form thioester linkages with CoA-SH. The metabolically active form of a carboxylic acid is the corresponding acyl-CoA thioester, in which the thioester linkage is a high-energy bond (Figure 15.11). Thioesters are high-energy com-pounds because of the possible dissociation of the products after hydrolysis and resonance structures of the products. For example, when acetyl-CoA is hydrolyzed, the ÑSH at the end of the molecule can dissociate slightly to form H+ and CoA-S-. The acetate released by the hydrolysis is stabilized by resonance. Acetyl-CoA is a particularly important metabolic intermediate; other acyl-CoA species figure prominently in lipid metabolism. 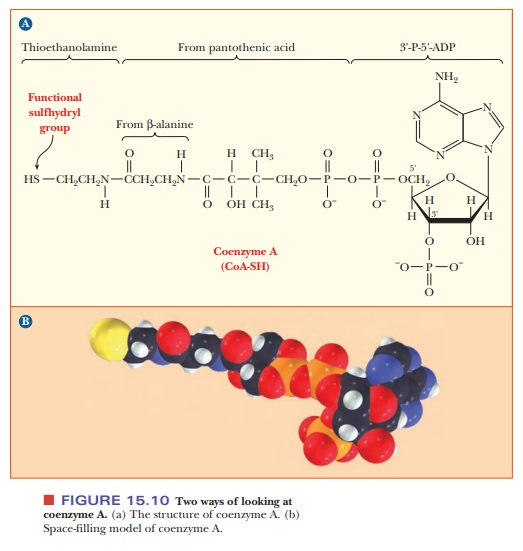 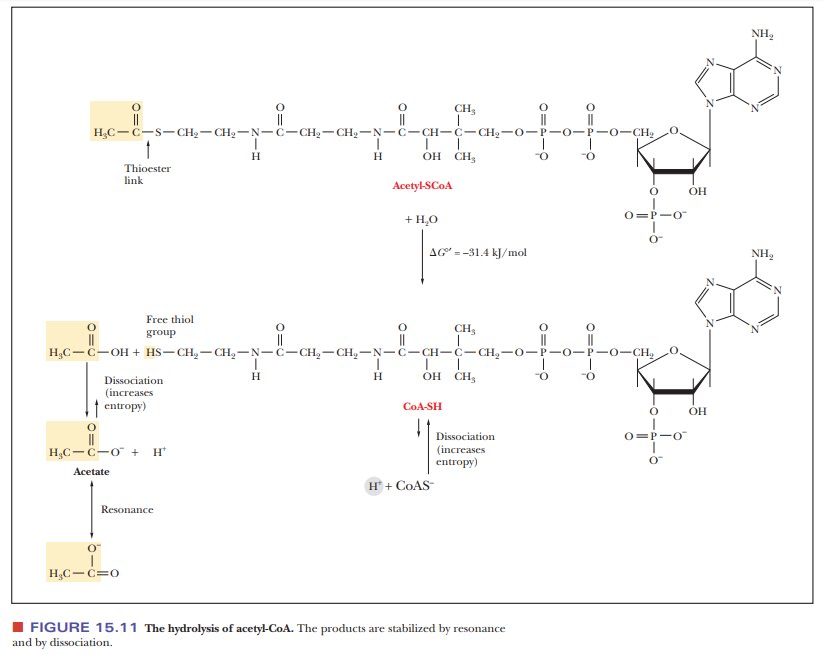 Like catabolism, anabolism proceeds in stages. Unlike catabolism, which releases energy, anabolism requires energy. The ATP produced by catabolism is hydrolyzed to release the needed energy. Reactions in which metabolites are reduced are part of anabolism; they require reducing agents, such as NADH, NADPH, and FADH2, all of which are the reduced forms of coenzymes In their oxidized forms, these coenzymes serve as the intermediate oxidizing agents needed in catabolism. In their reduced form, the same coenzymes provide the Òreducing powerÓ needed for the anabolic processes of biosynthesis; in this case, the coenzymes act as reducing agents.

We are now in a position to expand on our earlier statements about the natures of anabolism and catabolism. Figure 15.12 is an outline of metabolic pathways that explicitly points out two important features of metabolism: the role of electron transfer and the role of ATP in the release and utilization of energy. 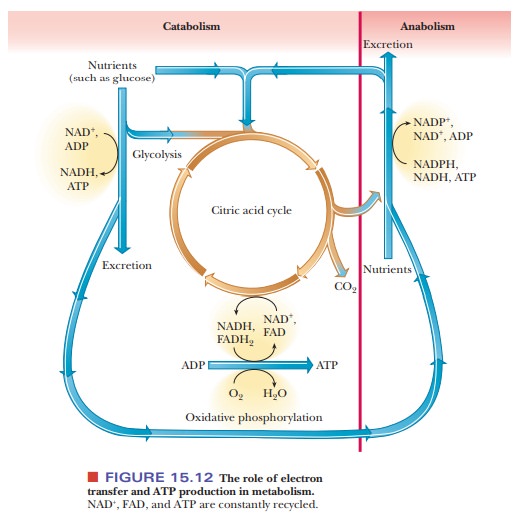 Even though this outline is more extended than the one in Figure 15.1, it is still very general. The more important specific pathways have been studied in detail, and some are still the subjects of active research.

Metabolic pathways proceed in many stages, allowing for efficient use of energy.

Many coenzymes, particularly coenzyme A (CoA) play a crucial role in metabolism.