There are no specific findings at autopsy, except for nasal septal ulceration and perforation if the deceased had been a long-term abuser of cocaine.

·              There are no specific findings at autopsy, except for nasal septal ulceration and perforation if the deceased had been a long-term abuser of cocaine. Histological study of nasal septal mucosa in such cases may reveal characteristic changes including arteriolar thickening, increased perivas- cular deposition of collagen and glycoprotein, and chronic inflammatory cellular infiltration.

·              Cocaine can be recovered by sampling from recent injec- tion sites, or by swabs from the nasal mucosa. It can also be recovered from the liver and especially brain, where cocaine may be found not only in dopamine-rich areas such as caudate, putamen, and nucleus accumbens, but also in other extra-striatal regions.

·              Specimens obtained postmortem should be preserved with sodium fluoride, refrigerated, and analysed quickly. Tissue specimens should be frozen.

·              Cocaine has been abused for centuries, but its toxic proper- ties have been studied extensively only in the last couple of decades. In the current drug subculture, cocaine has become the “champagne drug” because of its cost and relative scarcity. The situation is not much different in India with cocaine abuse restricted mainly to the affluent classes of society.

·              Cocaine has always been popular with musicians (espe- cially jazz and rock), other artistes, and film personalities. Today cocaine has made inroads into the general popula- tion, especially adolescents. After the cocaine epidemic of the 1970s (“snorting seventies”) in the West, there had been a relative lull in the 1980s and early 1990s. A recent survey shows the cocaine resurgence of the 21st century has not only affected Western countries, but even poorer countries such as India. In fact a sizeable chunk of youth (including girls) from well-to-do families in metropolitan cities such as Mumbai, Delhi, and Bangalore have no qualms about drug abuse, and even openly admit to using “party drugs” such as cocaine as a “cool” mode of recreation. Since cocaine has a reputation of enhancing sexual pleasure, such wide- spread abuse has also led to increased spread of sexually transmitted diseases such as AIDS because of high-risk sexual practices among the users.

·              Cocaine abuse by pregnant mothers can lead to devastating effects on the foetus and the new-born (Table 16.5). There is convincing evidence that cocaine is teratogenic and can play an important role in the causation of several serious congenital anomalies (Table 16.6). 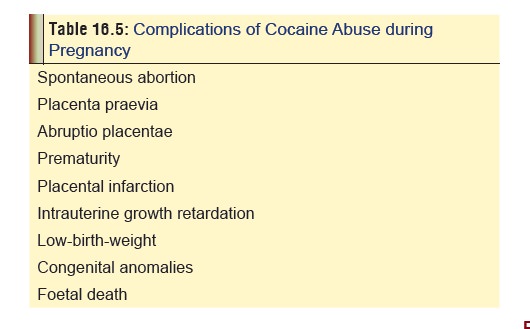 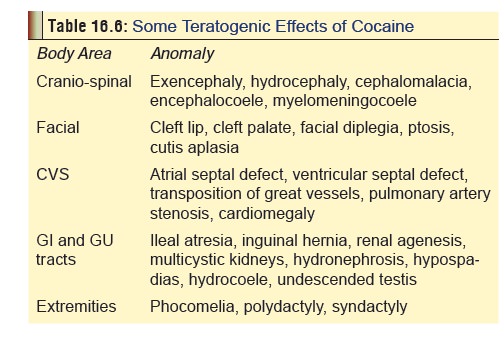 ·              Cocaine abuse is well-known for its propensity to cause sudden death not only due to its deleterious effects on health (cerebrovascular accidents, myocardial infarction, malignant hyperthermia, renal failure), but also due to its capacity to provoke the user to commit acts of aggression and violence. Deaths due to massive overdose are especially common among those who smuggle the drug within their bodies (“cocaine packers”).

––  The practice of swallowing balloons, condoms, or plastic packets filled with illegal drugs for the purpose of smuggling is called “body packing”, (Fig 16.7), and the individual who does this is referred to as a “mule”. 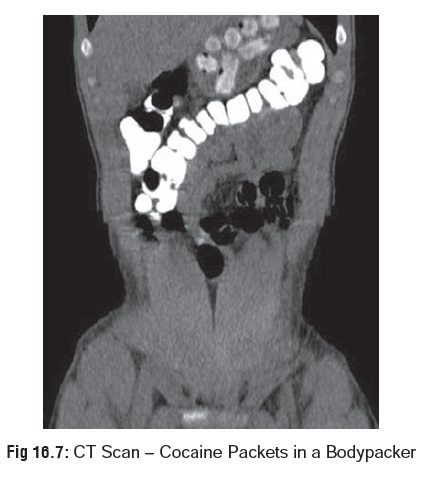 ––  This must be differentiated from “body stuffing” in which an individual who is on the verge of being arrested for possession of illegal drugs, swallows his illicit contraband to conceal the evidence. Leaking from these poorly wrapped packets can produce cocaine toxicity.

––  Sudden death due to massive overdose can occur in either a bodypacker or a bodystuffer, if one or more of the ingested packages burst within the gastrointestinal tract.

--Cathartic/whole bowel irrigation to flush the packages out of the intestines.

--Symptomatic patients should be considered a medical emergency, and be evaluated for surgical removal of the packets.

--Asymptomatic patients should be monitored in an intensive care unit until the cocaine packs have been eliminated. This must be confirmed by follow-up plain radiography and barium swallows.

--Bowel obstruction in asymptomatic patients may necessitate surgery. Endoscopic removal has been successful in some cases.