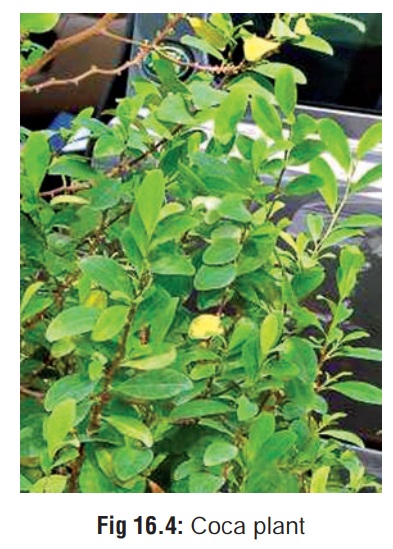 Cocaine (“coke” or “snow”) is a natural alkaloid present in the leaves of the coca plant (Fig 16.4), i.e. Erythroxyloncoca,** a shrub that grows well in South America, Mexico,Indonesia, and West Indies.

■■   Cocaine (“coke” or “snow”) is a natural alkaloid present in the leaves of the coca plant (Fig 16.4), i.e. Erythroxyloncoca,** a shrub that grows well in South America, Mexico,Indonesia, and West Indies. 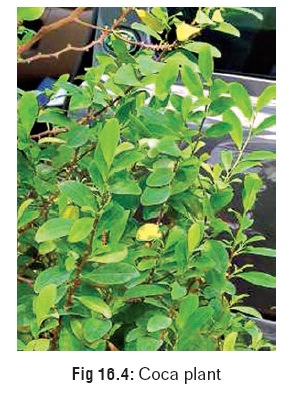 ■■ Chemically, cocaine is benzoylmethylecgonine, and belongs to the tropane family of natural alkaloids, other members of which include atropine and scopolamine.

·     Cocaine is usually abused by either chewing coca leaves, smoking coca paste, or “snorting” cocaine hydrochloride (Fig 16.5). The last mentioned is the most popular form of cocaine intake, i.e. the drug is inhaled in powder form through the nostrils (Fig 16.6). Occasionally, cocaine hydrochloride is injected intravenously. 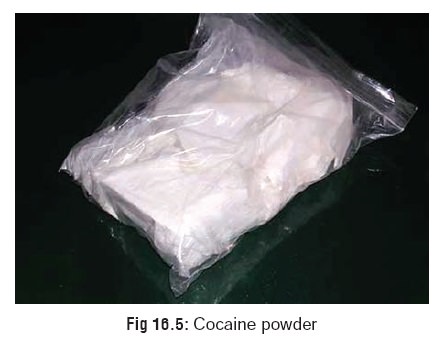 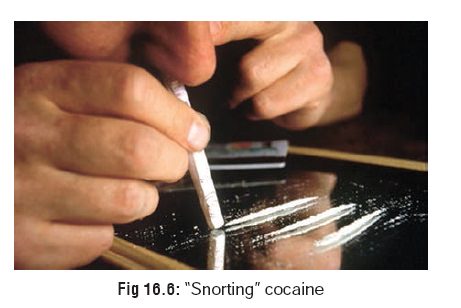 ·     Today, a smokable form of cocaine (“crack” or “rock”) has virtually become a rage in the West. Pure alkaloidal cocaine (“free-base” or “baseball”) can also be smoked. Occasionally coca paste or cocaine sulfate (cocaine base, “pasta”, “bazooka”) is smoked.

·     Cocaine freebase is prepared from cocaine hydrochloride by extracting the cocaine with an alkaline solution (buffered ammonia) and adding a solvent such as ether or acetone. The mixture separates into two layers, the top solvent layer containing the dissolved cocaine. The solvent is then evaporated leaving almost pure cocaine crystals.

o     “Free-base” is a colourless, odourless, transparent, crystalline substance that makes a popping or cracking sound when heated (hence the term “crack”).

o     Both free-base and crack are more stable to pyrolysis than the hydrochloride salt, and therefore can be smoked either using a “coke pipe” or mixed into a cigarette (“joint”).

o     A solution of cocaine hydrochloride can also be heated in a pan with baking soda added until a solid “rock” is formed, pieces of which can be smoked directly.

·     Street cocaine is often impure. The content of pure cocaine ranges from 10 to 50 percent (most commonly 15 to 20 percent). Cocaine which is available on the street is often adulterated with one or more of the following compounds: talc, lactose, sucrose, glucose, mannitol, inositol, caffeine, procaine, phencyclidine, lignocaine, strychnine, ampheta-mine, or heroin (“speed ball”).

·      Topical anaesthetic (4 to 10% solution) for intranasal and bronchoscopic procedures.

·      Relief of severe (oncologic) pain: Cocaine is one compo-nent of Brompton’s cocktail, (the others being morphine, chlorpromazine, and alcohol), which is popular in Europe for the control of intractable pain associated with some forms of cancer.

·      Cocaine is one of the components of TAC (the others being tetracaine and adrenaline) which is sometimes used as a topical anaesthetic in children with scalp and facial lacera-tions.

·              Cocaine is the most powerful naturally derived CNS stimulant known to man. Stimulation of the brain occurs in a rostral-to-caudal fashion. The cortex is stimulated first resulting in excitement, restlessness, and increased motor activity. Subsequent stimulation of lower motor centres produces tonic-clonic convulsions. The medulla is at first stimulated resulting in an initial increased respiratory rate, followed by depression with resultant respiratory failure.

·              The CNS stimulant effects of cocaine are medi-ated through inhibition of dopamine reuptake in the nucleus accumbens. The dopamine-reuptake trans-porter controls the levels of dopamine in the synapse by rapidly carrying the neurotransmitter back into nerve terminals after its release. Cocaine, which binds strongly to the dopamine-reuptake transporter, is a classic blocker of such reuptake after normal neuronal activity. Because of this blocking effect, dopamine remains at high concentrations in the synapse and continues to affect adjacent neurons producing the characteristic cocaine “high”.

Cocaine also inhibits reuptake of noradrenaline and serotonin. Increase in the concentrations of the former plays an important role in the toxic effects of cocaine.

Through direct blockade of fast sodium channels, cocaine stabilises the axonal membrane, producing a local anaesthetic effect. Cocaine is the only local anaes-thetic that interferes with the uptake of neurotransmitter by the nerve terminals and simultaneously functions as vasoconstrictor.

Initial effect of cocaine on the CVS is bradycardia, secondary to stimulation of vagal nuclei. However, the bradycardia is too transient to be clinically evident, and tachycardia becomes the prominent effect resulting from central sympathetic stimula- tion. The cardiostimulatory effect of cocaine is due in large part to sensitisation to adrenaline and noradrenaline, preventing neuronal reuptake of these catecholamines, as well as due to increased release of noradrenaline from adrenergic nerve terminals. The increased concentrations and persistence of catecho- lamines near the receptors of the effecter organ lead to exaggerated sympathetic effects.

·              Ingestion and insufflation: Cocaine is well-absorbed from oral, nasal, and pulmonary routes. Onset of action on insufflation is within 1 to 3 minutes, and peak effects are seen in 20 to 30 minutes.

·              Excretion is mainly through urine. Due to the long elimination half-life of BE, assays for its detection in urine may be successful up to 2 to 3 days following cocaine use. In rare cases, it has been detected even after 3 weeks.