Stimulation of calorigenic activity of liver. Body temperature often soars to 108 to 112°F, and does not respond to conventional antipyretics.

·              Augmentation of heat production due to increased psychomotor activity.

·              Direct pyrogenic effect due to action on thermoreg-ulatory centres in the hypothalamus.

·              Stimulation of calorigenic activity of liver. Body temperature often soars to 108 to 112°F, and does not respond to conventional antipyretics. It is often associated with rhabdomyolysis, seizures, and renal failure.

·              Headache: Three patterns of cocaine-induced headaches have been identified –

n   Pattern 1—Develops within minutes, and lasts for 2 to 48 hours. The headache is usually occipital or bilateral, with associated throbbing, photophobia, nausea, and vomiting.

n   Pattern 2—Occurs during a cocaine “binge”, (4 to 14 days of abuse, 1 to 3 g/day), with onset after a few days, which increases in severity progressively. It is mostly frontal, with associ-ated throbbing, nausea, and sometimes diplopia and dizziness.

n   Pattern 3—Occurs 1 to 4 days after the last dose of cocaine, and worsens over the next 1 week with continued abstinence. It is also frontal, with associated throbbing, nausea, vomiting, photophobia, and occasionally neck stiffness.

·              Convulsions: Generalised tonic-clonic, partial motor, and partial complex seizure have all been reported. Seizures may be recurrent and status epilepticus has been reported, particularly in chil-dren. Sometimes there is lethargy and decreased level of consciousness which can persist up to 24 hours (“cocaine washed out syndrome”).

·              Mydriasis and/or loss of eyebrow and eyelash hair from smoking crack cocaine may occur.

·              Thermal injuries to the upper airway leading to epiglottitis, laryngeal injury, and mucosal necrosis have been reported after smoking “crack” or free base cocaine.

·              Rhabdomyolysis with hyperthermia, massive elevation of creatine phosphokinase, and acute renal failure: Although the mechanism of cocaine-associated rhabdomyolysis is unclear, it is postu-lated that it may result from ischaemia due to vasoconstriction, direct toxicity, hyperpyrexia, and increased muscle activity from agitation or seizure activity.

·              Intestinal perforation: It is postulated that cocaine blocks the reuptake of noradrenaline leading to mesenteric vasoconstriction and focal tissue ischaemia and perforation.

·              Pneumoperitoneum has been reported after smoking crack cocaine.

·              Hepatic necrosis (centrilobular, midzonal, and panlobar) has been reported in overdose.

·              Renal failure, usually secondary to myoglobinuria and rhabdomyolysis, has been reported after intra-venous or intranasal cocaine use.

·              Priapism has been observed after topical application of cocaine to the glans penis.

·              Severe metabolic acidosis has been reported due to seizures, agitation, and hypotension.

Cocaine is often combined with other drugs such as ethanol and heroin.

-- Concurrent use of cocaine and ethanol produces additive effects on the brain. It results in the formation of the metabolite, cocaethylene which is more cardiotoxic, and is associated with enhanced mortality.

-- Combination of cocaine with heroin is referred to as “speed ball” and is reputed to produce a double effect of initial high “kick” of cocaine, followed by subsequent euphoric “rush” of heroin. “Speed ball” is usually injected.

·              Cocaine dependence is defined as a cluster of physi-ological, behavioural, and cognitive symptoms that, taken together, indicate that the person continues to use cocaine despite significant problems related to such use.

·              Some cocaine users can use cocaine intermittently without becoming dependant, though it is not clear how long such intermittent, nondependant use can continue. Intermittent use consists of episodes or binges of use, often starting on weekends and paydays, and lasting until the drug supply is exhausted or toxicity develops.

consecutive days (though usually this extends to only 3 or 4 days). When the binge comes to an end, a “cocaine crash” occurs.

Some cocaine abusers develop problems or adverse effects related to their drug use (i.e. their use is maladaptive). Examples of such recurrent mala-daptive patterns include use that leads to multiple legal problems, failure to meet major social, school, or work-related obligations, and continued use despite social or vocational difficulties caused by, or aggravated by cocaine use. When one or more such substance-related problems occur in a 12-month period, the diagnosis of cocaine abuse is made.

Chronic use of cocaine leads to CNS dopamine depletion and increases in the number and sensi-tivity of dopamine receptors. The dysphoric state associated with cocaine withdrawal (vide infra) and craving for cocaine appears to be a result of the dopamine-depleted condition.

-- Agitation, restlessness: A cocaine-associated agitated delirium syndrome has been identified,comprising the following in sequence: hyper-thermia, delirium with agitation, respiratory arrest, and death.

-- “Crack hands”: A syndrome of multiple, black-ened, hyperkeratotic lesions (linear or circular), of the fingers and palms has been described in crack cocaine smokers. These lesions probably result from the heat of the glass cocaine pipe.

-- Maternal chronic cocaine use during preg-nancy has been suggested as a possible factor in Sudden Infant Death Syndrome. Cocaine readily passes into breast milk and can cause adverse effects in the nursing infant.

»»Extensive bony destruction of the orbital walls with associated orbital cellulitis may occur in patients with a history of chronic intranasal cocaine abuse.

»»Intestinal ischaemia following cocaine ingestion, injection, or crack use has been described. 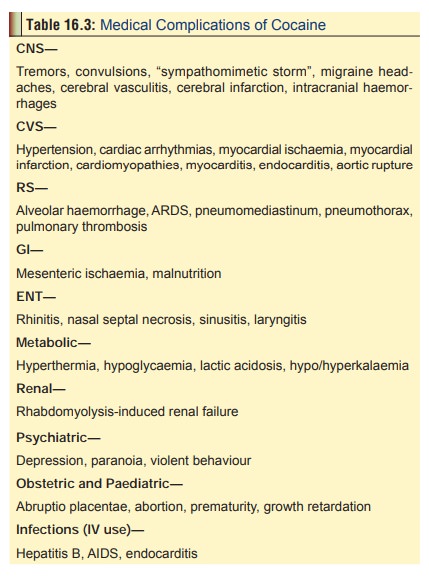 -- The total duration of this phase lasts for anywhere between 9 hours and 4 days, and is subdivided further into the following stages –

Phase III—(“Extinction”): Increased tendency torelapse. The extinction phase may be prolonged and consists of brief, episodically evoked cravings that occur months to years after withdrawal.