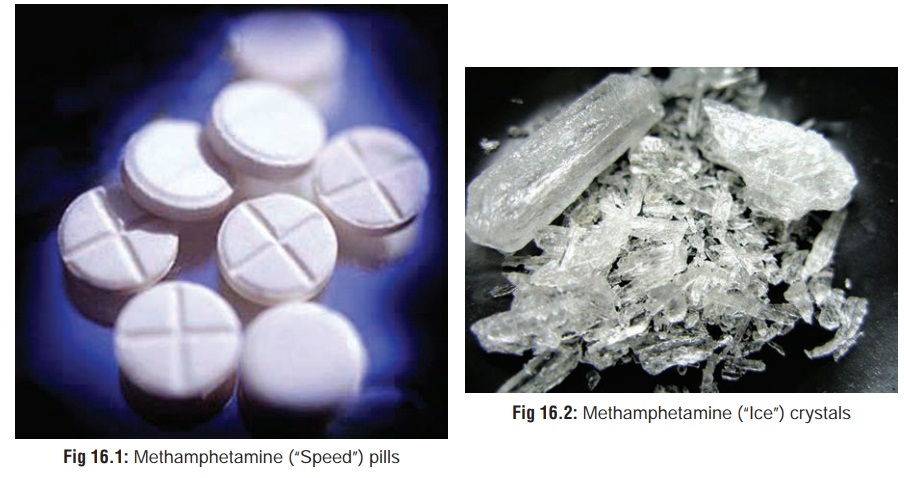 The original amphetamine, racemic beta-phenylisopropylamine was first synthesised in 1887, and was marketed in 1932 as a nasal decongestant (Benzedrine inhaler).

The original amphetamine, racemic beta-phenylisopropylamine was first synthesised in 1887, and was marketed in 1932 as a nasal decongestant (Benzedrine inhaler). Widespread abuse led to its ban in 1959.

·              Methamphetamine abuse began in the 1950s and reached a peak in the 1970s. It used to be referred to as “speed” or “go” (Fig 16.1). In the late 1980s, a pure preparation of methamphetamine hydrochloride made its appearance for the first time in Hawaii where it was referred to as “batu”. It quickly made its way across to the United Kingdom, Australia, Western Europe, and USA, where it became popular by the slang name “ice” (or “glass”) (Fig 16.2). While ice is produced by the ephedrine reduction method and is very pure, occurring as large translucent crystals, a variant produced by an oil-based method is called “crystal” (or “crank”), and is a white to yellow crystal product. 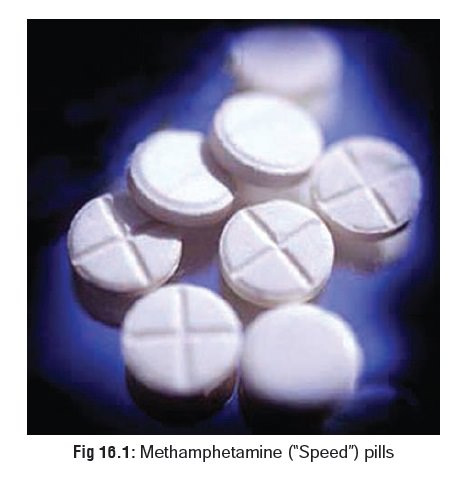 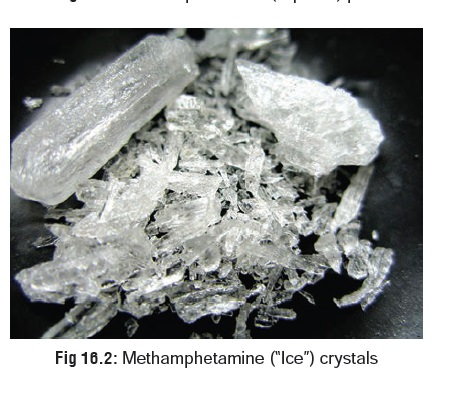 Some amphetamines have therapeutic uses and are still available as prescription drugs in Western countries (Table 16.1). They are not available in India (except for mephentermine). 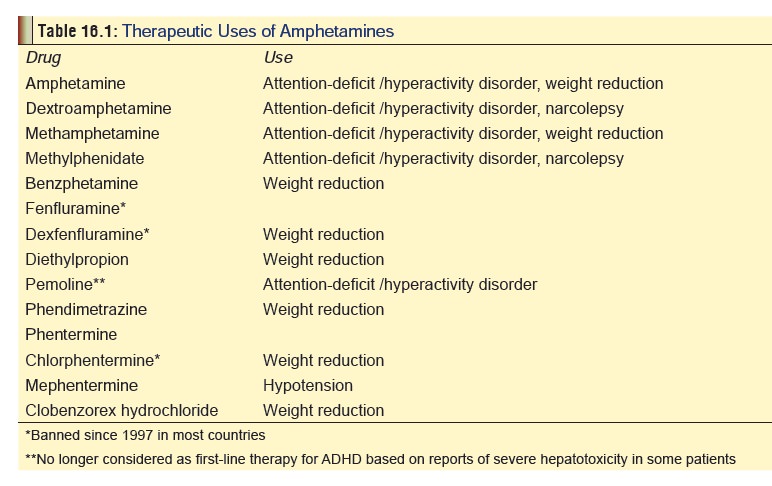 ·              The major mechanism of acion of amphetamines involves the release of monoamines from storage sites in axon termi-nals, which leads to increased monoamine concentration in the synaptic cleft. The release of dopamine in the nucleus accumbens and related structures is responsible for the reinforcing and mood elevating effects of amphetamines.

·              The most prominent effects of amphetamines are the catecholamine effects as a result of stimulation of peripheral alpha and beta adrenergic receptors. Enhanced concentra- tion of noradrenaline at the locus coeruleus is responsible for the anorexic and stimulating effects, as well as to some extent, for the motor-stimulating effects.

·              Cardiovascular effects result from the stimulation of release of noradrenaline.

·              In general, peak plasma levels are seen in about 30 minutes after intravenous or intramuscular injection, and about 2 to 3 hours after oral amphetamine ingestion.

·               Hyperthermia: can be severe, and may result from hypothalamic dysfunction, metabolic and muscle hyperactivity, or prolonged seizures.

·              Intracerebral haemorrhage: Abuse of amphetamine and related drugs can increase the risk for cerebro-vascular incidents in young adults

·              –– Cardiomyopathy: Acute and chronic cardiomyo-pathy can result from hypertension, necrosis, or ischaemia.

·              Metabolic acidosis: This occurs with severe poisoning, and has even been reported after smoking crystal methamphetamine.

·              Use of “ice” is associated with unique neuropsy- chiatric toxicity. Auditory hallucinations, severe paranoia, and violent behaviour have been reported.

·              Amphetamines can be taken orally, by injection, by absorption through nasal and buccal membranes; or by heating, inhalation of the vapours, and absorption through the pulmonary alveoli. Inhaled amphetamine is almost immediately absorbed with a rapid onset of effects. Unlike cocaine, amphetamines can be vapour- ised without much destruction of the molecule, thus obviating the need for preparing a free-base form for smoking. As with opiates, the rapid onset of effects from amphetamine injection or inhalation produces an intensely pleasurable sensation referred to as “rush”.

o     Anorexia, loss of weight, emaciation: Weight loss is one of the most characteristic findings with chronic use of amphetamine or its derivatives, and is said to be the most striking effect in chronic “ice” smoking.

o     Vomiting and diarhoea are common. Ischaemic colitis may occur.

o     Paranoid psychosis, unpredictable violence: The most common symptoms in patients with meth- amphetamine-induced psychosis were auditory and visual hallucinations, persecutory delusions, and delusions of reference.

o     Occasionally, very rapid IV injection of a large dose produces a condition called “overamped”, charac- terised by inability to speak or move even though consciousness is fully retained. Blood pressure and temperature are usually elevated. There may be respiratory distress.

·              The fatal dose of amphetamines is highly variable, and while death can occur with as little as 1.5 mg/kg of metham- phetamine, survival has been recorded with 28 mg/kg. This in fact represents the usual range of amphetamine’s lethal dose—150 mg to 2 grams. However, because of tolerance, addicts can tolerate up to 5 grams (single IV dose), or 15 gm/day (smokable methamphetamine).

·              Death due to amphetamine toxicity most commonly results from arrhythmias, hyperthermia, or intracerebral

haemorrhage. In cases of survival, symptoms gradually resolve as the drug is excreted over a period of 24 to 48 hours.

·      Urine is the specimen of choice. Levels above 2 mg/100 ml indicate acute toxicity. Methods of analysis include TLC,

·              RIA, HPLC, and GC-MS. The first three methods often give false positive results, and hence confirmation of a positive test must always be done by GC-MS.

·      A new method (electron-impact mass fragmentography) enables detection and even quantitation of methampheta-mine in hair, nails, sweat, and saliva.

·      Hair analysis may provide documentation of methampheta-mine or other drug exposure for several months or longer. To obtain hair samples, a new disposable scissors should be used to cut a very small amount of hair (100 mg total, about the width of a pencil) from about 10 different places. The hair must be cut as close to the scalp as possible.

·              Consider the necessity of a CBC, urinalysis, coagu-lation profile, chest X-ray, CT scan of head, and lumbar puncture, depending on the presentation.

·              Shock is a poor prognostic sign and needs to be managed effectively. Consider the need for right-sided heart catheterisation to measure right-sided filling pressure and cardiac output.

·              Anxiety, agitation, and hyperactivity can usually be controlled with benzodiazepines. Diazepam is the drug of choice, and is administered in a dose of 10 mg IV at intervals (up to a maximum of 100 mg). Much larger doses (hundreds of milligrams) may be required to obtain adequate sedation. Titrate dose to clinical response. Control of agitation is an important aspect to the treatment of amphetamine overdose, since it often leads to hyperthermia, a common cause of mortality in amphetamine overdose. Neuroleptics are generally not preferred since they may aggravate hyperthermia, convul-sions, and cardiac arrhythmias. Physical restraint is inadvisable, since resistance against such measures will aggravate rhabdomyolysis and hyperthermia. Extreme agitation and hallucinations may require the administration of IV droperidol (up to 0.1 mg/kg). Since haloperidol lowers the seizures threshold, and is associated with neuroleptic malig-nant syndrome, it is not advisable.

·              Convulsions can be managed with benzodiaz-epines (IV diazepam), phenytoin, or barbiturates. Refractory cases may require curarisation.

·              Hyperthermia should be tackled aggressively with hypothermic blankets, ice baths, and dantrolene infu-sions. Large IV doses of benzodiazepines can help.

·              Refractory cases must be subjected to neuromuscular paralysis and mechanical ventilation.

·              Tachycardia can be managed with beta blockers (atenolol). Labetolol which has combined alpha and beta blocking effects, may be preferable if tachycardia is associated with hypertension. Sedation with intra-venous benzodiazepines (diazepam 5 to 10 mg IV repeated every 5 to 10 minutes as needed) is usually sufficient for treating hypertension. A short acting, titratable agent such as sodium nitroprusside should be considered if unresponsive to benzodiazepines.

·              For ventricular arrhythmias: Lignocaine and amiodarone are generally first line agents for stable monomorphic ventricular tachycardia. Sotalol is a good alternative. Amiodarone and sotalol should be used with caution if the QT interval is prolonged, or if torsades de pointes is involved in the overdose.

·              Unstable rhythms require cardioversion. Atropine may be used when severe bradycardia is present, and PVCs are thought to represent an escape complex.

·              For rhabdomyolysis: Early aggressive fluid replacement is the mainstay of therapy, and may help prevent renal insufficiency. Diuretics such as mannitol or furosemide may be needed to maintain urine output. Urinary alkalinisation is not routinely recommended.

·              Diazepam and chlorpromazine have been effective in treating amphetamine-induced chorea.

·              Although peritoneal dialysis and haemodialysis have been demonstrated to enhance elimination of amphetamine, the clinical efficacy of these procedures in human overdose has not been proven and they are rarely if ever clinically indicated. Acidification of urine enhances amphetamine excretion, but may precipitate acute renal failure in patients with myoglobinuria and is therefore contraindicated.

·              Most casual users of amphetamines do not need treat-ment. Those with moderately severe dependence can be treated on an outpatient basis without using drugs.

·               Strategies range from residential and ambulatory detoxi-fication to day treatment, multistep activities, and case It is preferable to provide a structured and manualised cognitive behavioural treatment, making use of a combination of group and individual counselling.

·              A wide variety of pharmacological agents have been tried as adjuncts to (or major elements in) the treatment of amphetamine dependence. These include drugs such as imipramine and fluoxetine, but results have been disappointing.