Blood or plasma cocaine levels are not clinically useful, although they may be advisable to be done in medicolegal cases.

Blood or plasma cocaine levels are not clinically useful, although they may be advisable to be done in medicolegal cases. Qualitative urine tests using kits may be helpful in clinical diagnosis (by utilising chromatography, radioim-munoassay, enzyme immunoassay, fluorescence polarisa-tion immunoassay, and enzyme-multiplied immunoassay technique). Cocaine metabolites can be identified in the urine and provide a method for qualitatively identifying suspected cocaine poisoning or abuse. Benzoylecgonine, the major metabolite of cocaine, can usually be detected in urine for 48 to 72 hours after cocaine use.

·              Hair analysis: Cocaine benzoylecgonine and ecgoninemethyl ester can be analysed in hair samples by GC-MS and RIA. This can be done in adults, as well as in any infant whose mother was a cocaine user. It must be noted that external contamination of hair can occur from crack smoke, but that can be washed off, whereas systemic exposure is not affected by washing the hair.

·              ECG: Non-Q-wave myocardial infarction, with thepresence of a Twave infarct ECG pattern is often seen in cocaine users. During acute cocaine use abnormalities are more prevalent, and the QT interval is prolonged. Two-dimensional echocardiography may be useful in detecting the presence of new regional wall-motion abnormalities in patients experiencing cocaine-induced chest pain. Troponin levels may be more useful in evalu-ating potential myocardial injury than creatinine kinase.

·              Acid-base abnormalities: Arterial blood gases incocaine abusers show a pH varying from 7.35 to 7.5. Alkalosis (pH > 7.45) is caused by hyperventilation, and is manifested by tachypnoea and low PaCO2. About one third of patients show evidence of acidosis which may be the result of hypoventilation secondary to depressed mental status or chest trauma. Metabolic acidosis is not uncommon, and usually results from convulsions, agitation, or trauma.

·              X-ray: Body packer syndrome  can bediagnosed by plain films of the abdomen in the supine and upright positions. However, false negatives have been reported. Radiography may not detect cellophane-wrapped packets or crack vials. Even false-negative abdominal CT scans have been reported. It is therefore advisable to perform a contrast study of the bowel withfollow-up X-rays 5 hours after the oral ingestion of a water-soluble contrast compound such as meglumine amidotrizoate (50 ml). Daily views are performed there-after until negative views coincide with the passage of two drug packet-free stools.

Activated charcoal adsorbs cocaine in vitro under both acidic and alkaline conditions, and can be administered in cases of ingestion.

o     Severe, intractable cases may respond to dantrolene (1 mg/kg) every 6 hours. Alternatively, bromocrip-tine can be administered orally in a nasogastric tube.

·              Antipsychotics such as haloperidol or droperidol, and phenothiazines are not recommended since they can induce malignant hyperthermia and convul-sions. 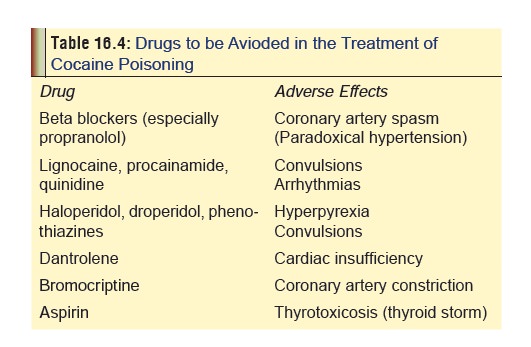 -- If systolic BP is higher than 120 mmHg, admin-ister nitroglycerine sublingually (up to 3 tablets or 3 sprays of 0.4 mg each).

-- If pain does not respond to nitroglycerine, use morphine (2 mg IV titrated to pain relief).

--  If chest pain is strongly suggestive of a myocar-dial infarction, consider thrombolytic therapy.

-- Diazepam 5 mg IV, or lorazepam 2–4 mg IV titrated to effect can prevent excess production of catecholamines by the CNS.

--  Hypertonic sodium bicarbonate: Sodium bicarbonate may be useful in the treatment of QRS widening and ventricular arrhythmias associated with acute cocaine use. A reasonable starting dose is 1 to 2 mEq/kg repeated as needed. Monitor arterial blood gases, maintain pH 7.45 to 7.55.

For systolic BP higher than 100 mmHg, admin-ister sublingual nitroglycerine or nifedipine 10 mg orally, or phentolamine 1 to 5 mg IV (followed by a drip of 10 mg in 1 litre of D5W at 10 ml/min).

For life-threatening arrhythmias, use of type IA antiarrhythmic agents may be considered (with caution).

Thrombolytic therapy may be necessary if myocar-dial infarction is not amenable to relief by nitrates, calcium channel blockers, or phentolamine. Caution about the use of thrombolytics in cocaine-associ-ated acute myocardial infarction (AMI) is generally advocated. Thrombolytics should be avoided in patients with cocaine-induced myocardial infarc-tion and uncontrolled hypertension, because of the increased risk of intracranial haemorrhage.

·              Dopamine and frusemide (60 mg three times a day) may reduce renal vascular resistance and help in reducing the number of haemodialyses required to reverse oliguria.

Acidosis—Correction of acidaemia through supportive care measures such as hyperventilation, sedation, active cooling, and sodium bicarbonate infusion can have beneficial effects on conduction defects.

·              Increasing the level of butyrylcholinesterase in the blood (which metabolises cocaine to inactive compounds) could help in rapidly inactivating cocaine in acute intoxications.

a.           Psychotherapy—This involves cognitive-behavioural, psychodynamic, and general supportive techniques. One example of a cognitive-behavioural method uses contingency contracting, in which it is agreed in advance that for a specified period of time (e.g. 3 months), if the patient uses cocaine (as detected by supervised urine testing), the therapist will initiate

b.           action that will result in serious adverse consequences for the patient, such as informing the employer.

i. Interpersonal group therapy focuses on relation- ships, and uses the group interactions to illustrate the interpersonal causes of individual distress, and

c.            Group counselling—The most widely used form of psychosocial treatment for cocaine dependence is group counselling, in which the group is open-ended with rolling admissions; the group leaders are drug counsel- lors, many of whom are recovering from addiction, and the emphasis is on providing a supportive atmosphere, discussing problems in recovery, and encouraging participation in multistep programmes.

·              Several drugs have been tried to help ameliorate the manifestations of cocaine withdrawal. Many of these (fenfluramine, trazodone, neuroleptic agents, etc.) have either not demonstrated clinical efficacy, or have produced serious side effects.

·              Amantadine, a dopamimetic agent, increases dopaminergic transmission and has been found to be useful in the treatment of early withdrawal symptoms and short-term abstinence. The usual dose recommended is 200 mg to 400 mg orally, daily, for up to 12 days. It is probably as effective as bromocriptine, and less toxic.

·              Tricyclic antidepressants may be useful for selected cocaine users with comorbid depression or intranasal use.