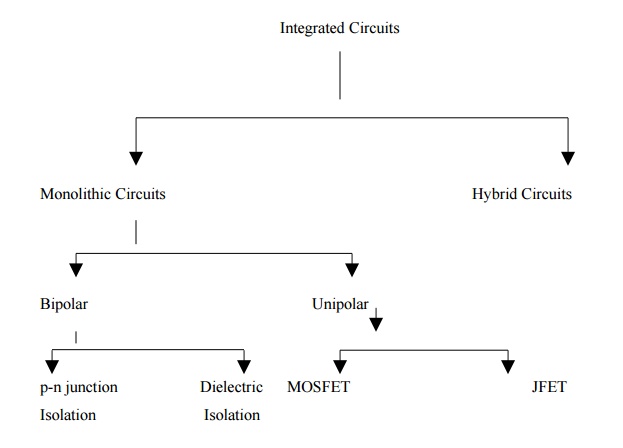 The first integrated circuits contained only a few transistors. Called "Small-Scale Integration" (SSI), digital circuits containing transistors numbering in the tens provided a few logic gates for example, while early linear ICs such as the Plessey SL201 or the Philips TAA320 had as few as two transistors. The term Large Scale Integration was first used by IBM scientist Rolf Landauer when describing the theoretical concept, from there came the terms for SSI, MSI, VLSI, and ULSI. They began to appear in consumer products at the turn of the decade, a typical application being FMinter-carrier sound processing intelevision receivers.

The next step in the development of integrated circuits, taken in the late 1960s, introduced devices which contained hundreds of transistors on each chip, called "Medium-Scale Integration" (MSI). They were attractive economically because while they cost little more to produce than SSI devices, they allowed more complex systems to be produced using smaller circuit boards, less assembly work (because of fewer separate components), and a number of other advantages.

The final step in the development process, starting in the 1980s and continuing through the present, was "very large-scale integration" (VLSI).The development started with hundreds of thousands of transistors in the early 1980s, and continues beyond several billion transistors as of 2007.

To reflect further growth of the complexity, the term ULSI that stands for "Ultra-Large Scale Integration" was proposed for chips of complexity of more than 1 million transistors.

Wafer-scale integration (WSI)is a system of building very-large integrated circuits that uses anentire silicon wafer to produce a single "super-chip". Through a combination of large size and reduced packaging, WSI could lead to dramatically reduced costs for some systems, notably

massively parallel supercomputers. The name is taken from the term Very-Large-Scale Integration, the current state of the art when WSI was being developed.

System-on-a-Chip (SoCorSOC) is an integrated circuit in which all the components needed for acomputer or other system are included on a single chip. The design of such a device can be complex and costly, and building disparate components on a single piece of silicon may compromise the efficiency of some elements.

However, these drawbacks are offset by lower manufacturing and assembly costs and by a greatly reduced power budget: because signals among the components are kept on-die, much less power is require. Three Dimensional Integrated Circuit (3D-IC) has two or more layers of active electronic components that are integrated both vertically and horizontally into a single circuit. Communication between layers uses on-die signaling, so power consumption is much lower than in equivalent separate circuits. Judicious use of short vertical wires can substantially reduce overall wire length for faster operation.