The CNS is composed of the brain, the spinal cord, and associated nerves that control voluntary acts. Structurally, the brain consists of the cerebrum, cerebellum, brain stem, and limbic system.

The CNS is composed of the brain, the spinal cord, and associated nerves that control voluntary acts. Structurally, the brain consists of the cerebrum, cerebellum, brain stem, and limbic system. Figures 2.1 and 2.2 show the locations of brain structures.

The cerebrum is divided into two hemispheres; all lobes and structures are found in both halves except for the pineal body, or gland, which is located between the hemi-spheres. The pineal body is an endocrine gland that influences the activities of the pituitary gland, islets of Langerhans, parathyroids, adrenals, and gonads. The cor-pus callosum is a pathway connecting the two hemispheres and coordinating their functions. The left hemisphere controls the right side of the body and is the center for logical reasoning and analytic functions such as reading, writing, and mathematical tasks. The right hemisphere controls the left side of the body and is the center for cre-ative thinking, intuition, and artistic abilities. 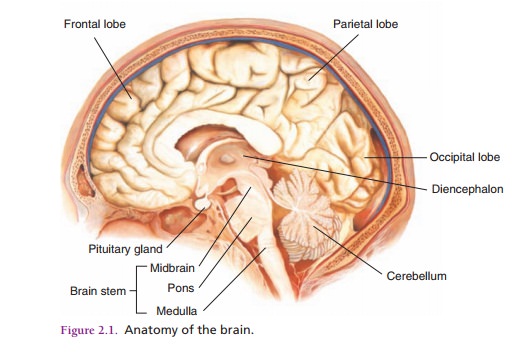 The cerebral hemispheres are divided into four lobes: frontal, parietal, temporal, and occipital. Some functions of the lobes are distinct; others are integrated. The frontal lobes control the organization of thought, body move-ment, memories, emotions, and moral behavior. The inte-gration of all this information regulates arousal, focuses attention, and enables problem-solving and decision mak-ing. Abnormalities in the frontal lobes are associated with schizophrenia, attention deficit hyperactivity disorder (ADHD), and dementia. The parietal lobes interpret sensa-tions of taste and touch and assist in spatial orientation. The temporal lobes are centers for the senses of smell and hearing and for memory and emotional expression. The occipital lobes assist in coordinating language generation and visual interpretation, such as depth perception.

The cerebellum is located below the cerebrum and is the cen-ter for coordination of movements and postural adjustments. It receives and integrates information from all areas of the body, such as the muscles, joints, organs, and other compo-nents of the CNS. Research has shown that inhibited transmission of dopamine, a neurotransmitter, in this area is associated with the lack of smooth coordinated movements in diseases such as Parkinsonâ€™s disease and dementia. 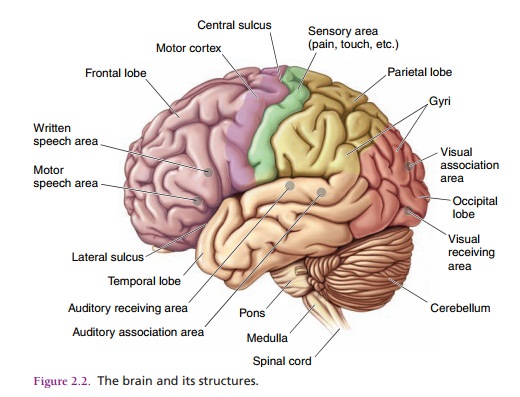 The brain stem includes the midbrain, pons, and medulla oblongata and the nuclei for cranial nerves III through XII. The medulla, located at the top of the spinal cord, contains vital centers for respiration and cardiovascular functions. Above the medulla and in front of the cerebrum, the pons bridges the gap both structurally and functionally, serving as a primary motor pathway. The midbrain connects the pons and cerebellum with the cerebrum. It measures only 0.8 inches (2 cm) long and includes most of the reticular activating system and the extrapyramidal system. The reticular activating system influences motor activity, sleep, consciousness, and awareness. The extrapyramidal system relays information about movement and coordination from the brain to the spinal nerves. The locus ceruleus, a small group of norepinephrine-producing neurons in the brain stem, is associated with stress, anxiety, and impul-sive behavior.

The limbic system is an area of the brain located above the brain stem that includes the thalamus, hypothalamus, hip-pocampus, and amygdala (although some sources differ regarding the structures this system includes). The thala-mus regulates activity, sensation, and emotion. The hypo-thalamus is involved in temperature regulation, appetitecontrol, endocrine function, sexual drive, and impulsive behavior associated with feelings of anger, rage, or excite-ment. The hippocampus and amygdala are involved in emotional arousal and memory. Disturbances in the limbic system have been implicated in a variety of mental ill-nesses, such as the memory loss that accompanies demen-tia and the poorly controlled emotions and impulses seen with psychotic or manic behavior.