Multithreading is a feature provided by the operating system that enables your application to have more than one execution path at the same time. Technically, multithreaded programming requires a multitasking operating system.

Ø   Multithreading is a feature provided by the operating system that enables your application to have more than one execution path at the same time. Technically, multithreaded programming requires a multitasking operating system.

Ø   Let’s understand this concept with a very basic example. Everyone has used Microsoft

Word. It takes input from the user and displays it on the screen in one thread while it continues to check spelling and grammatical mistakes in another thread and at the same time another thread saves the document automatically at regular intervals.

Now let’s understand a program. In this program we will try to implement the concept of multithreading and will define multiple concurrent execution paths. 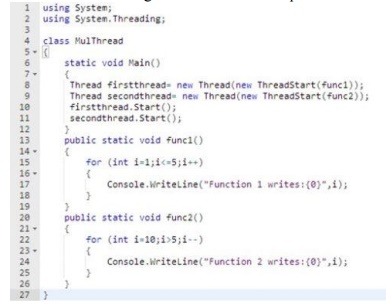 Now through the use of threads, we cannot be sure of the sequence of the output program. Now if you write this program without the threading concept, like this:

You will see that func2() will execute only after func1() and in the first program you will be able to execute both functions simultaneously.

The thread class provides a number of useful methods and properties to control and manage thread execution.

The following are the most commonly used static members of the System.Threading.Thread class:

·        CurrentThread(): gives a reference to the currently executing thread

·        Thread.Sleep(): cause the currently executing thread to pause temporarily for the specified amount of time

When you execute the preceding program, you will notice a delay of 1 second between the printing of the two lines.

Most Common Instance Member of the System.Threading.Thread class

The following are the most common instance members of the System.Threading.Thread class:

A  property of  string type  used  to  get/set  the  friendly name  of  the  thread  instance.

A property of type System.Threading.ThreadPriority to schedule the priority of threads.

A property of type System.Threading.ThreadState, used to get the value containing the state of the thread.

Starts the execution of the thread.

Pauses the execution of the thread temporarily.

Resumes the execution of a  suspended thread.

Make the current thread wait for another thread to finish.