The Byzantine emperors, who ruled from the city of Constantinople for about 1,000 years, called themselves Romans.

The Byzantine emperors, who ruled from the city of Constantinople for about 1,000 years, called themselves Romans. But their language was Greek. The splendour of Constantinople with its luxurious royal palaces, its libraries, its scholars familiar with the writings of Greeks and Romans and its fascinating St. Sophia Cathedral are the legacies they have left behind.

However, in terms of development of science and technology, there was no progress during this period. The economies of the Empire’s provinces were in the hands of large local landowners. The small peasants always lived on the edge of poverty. The fundamental weakness of Byzantine Civilization stood exposed when the participants of Fourth Crusade pillaged it and ruled it. The tottering empire finally fell to the Ottoman Turks in 1453.

St. Sophia Cathedral was built in mid-sixth century AD (CE) The most magnificent building in Europe at that time, it was known for its innovative architectural techniques. This Cathedral was turned into a mosque by the Ottoman Turks when they captured Constantinople. 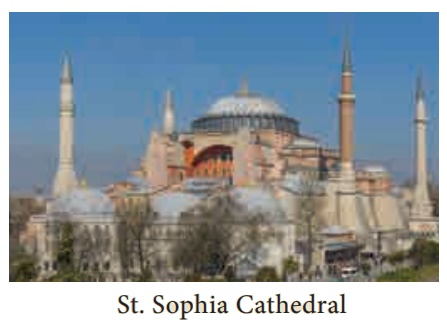