Terminology and Definitions-Degree of Freedom, Mobility

·        Kinematics: The study of motion (position, velocity, acceleration). A major goal of understanding kinematics is to develop the ability to design a system that will satisfy specified motion requirements. This will be the emphasis of this class.

·        Basic Mechanisms: Includes geared systems, cam-follower systems and linkages (rigid links connected by sliding or rotating joints). A mechanism has multiple moving parts (for example, a simple hinged door does not qualify as a mechanism).

·        Degrees of freedom: The number of inputs required to completely control a system. Examples: A simple rotating link. A two link system. A four-bar linkage. A five-bar linkage.

·        Types of motion: Mechanisms may produce motions that are pure rotation, pure translation, or a combination of the two. We reduce the degrees of freedom of a mechanism by restraining the ability of the mechanism to move in translation (x-y directions for a 2D mechanism) or in rotation (about the z-axis for a 2-D mechanism).

·        Joint: A connection between two links that allows motion between the links. The motion allowed may be rotational (revolute joint), translational (sliding or prismatic joint), or a combination of the two (roll-slide joint).

·        Kinematic chain: An assembly of links and joints used to coordinate an output motion with an input motion. 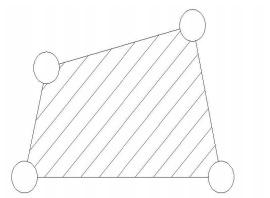 A link may also be defined as a member or a combination ofmembers of a mechanism, connecting other members and havingmotion relative to them, thus a link may consist of one or moreresistant bodies. A link is also known as Kinematic link or anelement.

Links can be classified into 1) Binary, 2) Ternary, 3) Quarternary, etc.

A Kinematic Pair or simply a pair is a joint of two links having relative motion between them.

Kinematic pairs can be classified according to

a) Lower Pair: A pair of links having surface or area contact between the members is known as a lower pair. The contact surfaces of the two links are similar.

Examples: Nut turning on a screw, shaft rotating in a bearing, all pairs of a slider-crank mechanism, universal joint.

b) Higher Pair: When a pair has a point or line contact between the links, it is known as a higher pair. The contact surfaces of the two links are dissimilar.

ii) Kinematic pairs according to nature of mechanical constraint.

a) Closed pair: When the elements of a pair are held together mechanically, it is known as a closed pair. The contact between the two can only be broken only by the destruction of at least one of the members. All the lower pairs and some of the higher pairs are closed pairs.

b)  Unclosed pair: When two links of a pair are in contact either due to force of gravity or some spring action, they constitute an unclosed pair. In this the links are not held together mechanically. Ex.: Cam and follower pair.

iii) Kinematic pairs according to nature of relative motion.

c)  Rolling pair: When the links of a pair have a rolling motion relative to each other, they form a rolling pair. A rolling wheel on a flat surface, ball ad roller bearings, etc. are some of the examples for a Rolling pair.

d)  Screw pair (Helical Pair): if two mating links have a turning as well as sliding motion between them, they form a screw pair. This is achieved by cutting matching threads on the two links.