Whitworth quick return mechanism is an application of third inversion of the single slider crank chain. This mechanism is shown in the figure below. The crank OC is fixed and OQ rotates about O. The slider slides in the slotted link and generates a circle of radius CP. Link 5 connects the extension OQ provided on the opposite side of the link 1 to the ram (link 6). The rotary motion of P is taken to the ram R which reciprocates. The quick return motion mechanism is used in shapers and slotting machines.

This is four bar mechanism with double crank in which the shortest link is fixed. If the crank AB rotates at a uniform speed, the crank CD rotate at a non -uniform speed. This rotation of link CD is transformed to quick return reciprocatory motion of the ram E by the link CE as shown in figure.

When the crank AB rotates through an angle α in Counter clockwise direction during working stroke, the link CD rotates through 180. We can observe that / α >/ β. Hence time of working stroke is α /β times more or the return stroke is α /β times quicker. Shortest link is always stationary link. Sum of the shortest and the longest links of the four links 1, 2, 3 and 4 are less than the sum of the other two. It is the necessary condition for the drag link quick return mechanism.

It is an application of second inversion. The crank and slotted lever mechanism is shown in figure below. 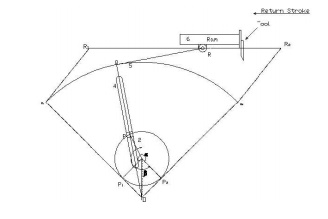 In this mechanism link 3 is fixed. The slider (link 1) reciprocates in oscillating slotted lever (link 4) and crank (link 2) rotates. Link 5 connects link 4 to the ram (link 6). The ram with the cutting tool reciprocates perpendicular to the fixed link 3. The ram with the tool reverses its direction of motion when link 2 is perpendicular to link 4. Thus the cutting stroke is executed during the rotation of the crank through angle α and the return stroke is executed when the crank rotates through angle β or 360 – α. Therefore, when the crank rotates uniformly, we get,

This mechanism is used in shaping machines, slotting machines and in rotary engines.

Ratchet and Pawl mechanism: This mechanism is used in producing intermittent rotary motion member. A ratchet and Pawl mechanism consists of a ratchet wheel 2 and a pawl 3 as shown in the figure. When the lever 4 carrying pawl is raised, the ratchet wheel rotates in the counter clock wise direction (driven by pawl). As the pawl lever is lowered the pawl slides over the ratchet teeth. One more pawl 5 is used to prevent the ratchet from reversing. Ratchets are used in feed mechanisms, lifting jacks, clocks, watches and counting devices. 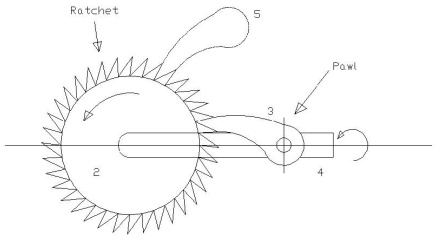 6. Geneva mechanism: Geneva mechanism is an intermittent motion mechanism. It consists of a driving wheel D carrying a pin P which engages in a slot of follower F as shown in figure. During one quarter revolution of the driving plate, the Pin and follower remain in contact and hence the follower is turned by one quarter of a turn. During the remaining time of one revolution of the driver, the follower remains in rest locked in position by the circular arc. 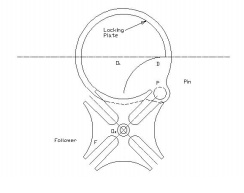 7. Pantograph: Pantograph is used to copy the curves in reduced or enlarged scales. Hence this mechanism finds its use in copying devices such as engraving or profiling machines. 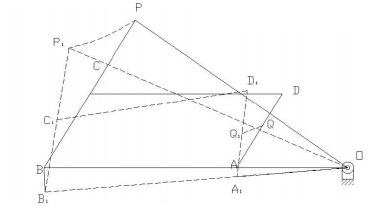 This is a simple figure of a Pantograph. The links are pin jointed at A, B, C and D. AB is parallel to DC and AD is parallel to BC. Link BA is extended to fixed pin O. Q is a point on the link AD. If the motion of Q is to be enlarged then the link BC is extended to P such that O, Q and P are in a straight line. Then it can be shown that the points P and Q always move parallel and similar to each other over any path straight or curved. Their motions will be proportional to their distance from the fixed point. Let ABCD be the initial position. Suppose if point Q moves to Q1 , then all the links and the joints will move to the new positions (such as A moves to A1 , B moves to Q1, C moves to Q1 , D moves to D1 and P to P1 ) and the new configuration of the mechanism is shown by dotted lines. The movement of Q (Q Q1) will be enlarged to PP1 in a definite ratio. 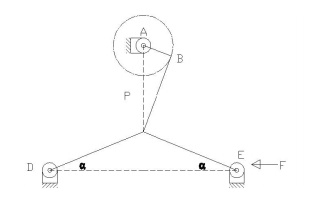 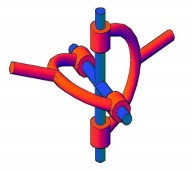 Hooke’s joint used to connect two parallel intersecting shafts as shown in figure. This can also be used for shaft with angular misalignment where flexible coupling does not serve the purpose. Hence Hooke’s joint is a means of connecting two rotating shafts whose axes lie in the same plane and their directions making a small angle with each other. It is commonly known as Universal joint. In Europe it is called as Cardan joint.

This mechanism is made of only turning pairs and is made of only turning pairs wear and tear of the parts is less and cheaper in manufacturing. The cross link KL connects two short axles AC and BD of the front wheels through the short links AK and BL which forms bell crank levers CAK and DBL respectively as shown in fig, the longer links AB and KL are parallel and the shorter links AK and BL are inclined at an angle α. When the vehicles steer to the right as shown in the figure, the short link BL is turned so as to increase α, where as the link LK causes the other short link AK to turn so as to reduce α. The fundamental equation for correct steering is, CotΦ–Cosθ = b / l

In the above arrangement it is clear that the angle Φ through which AK turns is less than the angle θ through which the BL turns and therefore the left front axle turns through a smaller angle than the right front axle. For different angle of turn θ, the corresponding value of Φ and (Cot Φ – Cos θ) are noted. This is done by actually drawing the mechanism to a scale or by calculations. Therefore for different value of the corresponding value of and are tabulated. Approximate value of b/l for correct steering should be between 0.4 and 0.5. In an Ackermann steering gear mechanism, the instantaneous centre I does not lie on the axis of the rear axle but on a line parallel to the rear axle axis at an approximate distance of 0.3l above it.

Three correct steering positions will be:

2) When moving one correct angle to the right corresponding          to the link ratio AK/AB and angle α.

3) Similar position when moving to the left.

In all other positions pure rolling is not obtainable.

Some Of The Mechanisms Which Are Used In Day To Day Life.

BELL CRANK: The bell crank was originally used in large house to operate the servant’s bell, hence the name. The bell crank is used to convert the direction of reciprocating movement. By varying the angle of the crank piece it can be used to change the angle of movement from 1 degree to 180 degrees.

GENEVA STOP: The Geneva stop is named after the Geneva cross, a similar shape to the main part of the mechanism. The Geneva stop is used to provide intermittent motion, the orange wheel turns continuously, the dark blue pin then turns the blue cross quarter of a turn for each revolution of the drive wheel. The crescent shaped cut out in dark orange section lets the points of the cross past, then locks the wheel in place when it is stationary. The Geneva stop mechanism is used commonly in film cameras.

ELLIPTICAL TRAMMEL: This fascinating mechanism converts rotary motion to reciprocating motion in two axis. Notice that the handle traces out an ellipse rather than a circle. A similar mechanism is used in ellipse drawing tools.

PISTON ARRANGEMENT: This mechanism is used to convert between rotary motion and reciprocating motion, it works either way. Notice how the speed of the piston changes. The piston starts from one end, and increases its speed. It reaches maximum speed in the middle of its travel then gradually slows down until it reaches the end of its travel.

RACK AND PINION and RATCHET

RACK AND PINION: The rack and pinion is used to convert between rotary and linear motion. The rack is the flat, toothed part, the pinion is the gear. Rack and pinion can convert from rotary to linear of from linear to rotary. The diameter of the gear determines the speed that the rack moves as the pinion turns. Rack and pinions are commonly used in the steering system of cars to convert the rotary motion of the steering wheel to the side to side motion in the wheels. Rack and pinion gears give a positive motion especially compared to the friction drive of a wheel in tarmac. In the rack and pinion railway a central rack between the two rails engages with a pinion on the engine allowing the train to be pulled up very steep slopes.

RATCHET: The ratchet can be used to move a toothed wheel one tooth at a time. The part used to move the ratchet is known as the pawl. The ratchet can be used as a way of gearing down motion. By its nature motion created by a ratchet is intermittent. By using two pawls simultaneously this intermittent effect can be almost, but not quite, removed. Ratchets are also used to ensure that motion only occurs in only one direction, useful for winding gear which must not be allowed to drop. Ratchets are also used in the freewheel mechanism of a bicycle.

WORM GEAR: A worm is used to reduce speed. For each complete turn of the worm shaft the gear shaft advances only one tooth of the gear. In this case, with a twelve tooth gear, the speed is reduced by a factor of twelve. Also, the axis of rotation is turned by 90 degrees. Unlike ordinary gears, the motion is not reversible, a worm can drive a gear to reduce speed but a gear cannot drive a worm to increase it. As the speed is reduced the power to the drive increases correspondingly. Worm gears are a compact, efficient means of substantially decreasing speed and increasing power. Ideal for use with small electric motors.

WATCH ESCAPEMENT: The watch escapement is the centre of the time piece. It is the escapement which divides the time into equal segments.The balance wheel, the gold wheel, oscillates backwards and forwards on a hairspring (not shown) as the balance wheel moves the lever is moved allowing the escape wheel (green) to rotate by one tooth. The power comes through the escape wheel which gives a small 'kick' to the palettes (purple) at each tick.

CAMS: Cams are used to convert rotary motion into reciprocating motion. The motion created can be simple and regular or complex and irregular. As the cam turns, driven by the circular motion, the cam follower traces the surface of the cam transmitting its motion to the required mechanism. Cam follower design is important in the way the profile of the cam is followed. A fine pointed follower will more accurately trace the outline of the cam. This more accurate movement is at the expense of the strength of the cam follower. 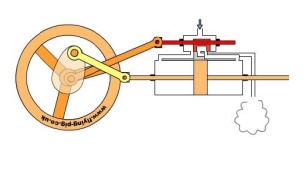 Steam engines were the backbone of the industrial revolution. In this common design high pressure steam is pumped alternately into one side of the piston, then the other forcing it back and forth. The reciprocating motion of the piston is converted to useful rotary motion using a crank.

As the large wheel (the fly wheel) turns a small crank or cam is used to move the small red control valve back and forth controlling where the steam flows. In this animation the oval crank has been made transparent so that you can see how the control valve crank is attached.