Apiculture is the rearing of honey bee for honey. It is also called Bee keeping. It is a profitable rural based industry and it is developed as an agro-based cottage industry. Apiculture provides employment to rural people and honey bee is domesticated by farmers to produce honey.

Apiculture is the rearing of honey bee for honey. It is also called Bee keeping. It is a profitable rural based industry and it is developed as an agro-based cottage industry. Apiculture provides employment to rural people and honey bee is domesticated by farmers to produce honey.

Honey bees are social insects. The nest of honey bee is known as the bee hive. They live in colonies and show division of labour.

There are three types of individuals in a colony namely the Queen bee, the drones and the worker bees.

a. Queen Bee: The queen is the largest member and the fertile female of the colony. They are formed from fertile eggs. The queen is responsible for laying eggs in a colony. The life span of the queen bee is 3-4 years.

b. Drones: They are the fertile males. They develop from unfertilized eggs. They are larger than the workers and smaller than the queens. Their main function is to fertilize the eggs produced by the queen.

c. Worker Bees: They are sterile female bees and are the smallest members of the colony. Their function is to collect honey, look after the young ones, clean the comb, defend the hive and maintain the temperature of the bee hive. 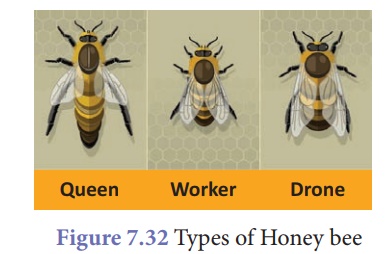 The comb of the bees is formed mainly by the secretion of the wax glands present in the abdomen of the worker bee. A comb is a vertical sheet of wax with double layer of hexagonal cells. The cells of the comb are of various types.

The storage cells contain honey and pollen. They are built in the margin and at the top of the comb.

The brood cells contain the young stages of the honey bees and they are built in the centre and the lower part of the comb. The brood chamber is divided into three types Worker chamber, Drone chamber and Queen chamber where the larvae developing into worker, drone and queen are reared.

Formation of Honey: The honey bees suck the nectar from various flowers. The nectar passes to the honey sac.

In the honey sac, sucrose present in the nectar mixes with acidic secretion and by enzymatic action it is converted into honey which is stored in the special chambers of the hive. 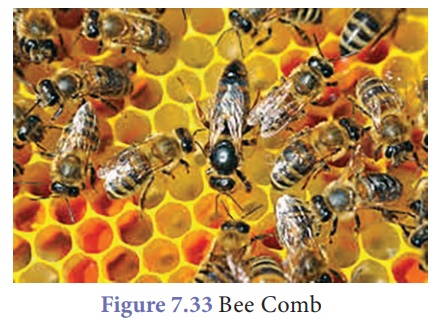 Honey bees are used in the production of honey and bee wax. Honey is the aromatic sweet material and its quality depends upon the flowers available to the bees for nectar and pollen collection.

Honey is a sweet, viscous, edible natural food product. Dextrose and sucrose gives sweet taste to the honey. It also contains protein, free amino acids, vitamins like ascorbic acid, niacin, riboflavin and thiamine. Minerals like calcium, iron, phosphorus and manganese are present. Acids such as citric acid, gluconic acid and formic acid are found in honey. Formic acid is a preservative in honey. Invertase is an enzyme present in honey.

·           Honey has an antiseptic and antibacterial property. It is a blood purifier.

Bee wax is the natural by product secreted by the wax glands of worker bee to construct the combs of bee hive. It is widely used in cosmetic and pharmaceutical industries.