One of the most economically important shell fish resources of India are prawns. They are crustaceans which inhabit freshwater, marine water, estuaries, backwaters and shallow waters of temperate and tropical countries.

One of the most economically important shell fish resources of India are prawns. They are crustaceans which inhabit freshwater, marine water, estuaries, backwaters and shallow waters of temperate and tropical countries. They are of great demand both in the local and international market. Due to their great taste, they are a cherished delicacy to be served as food.

In view of their popularity and marketing avenues in foreign countries there is a need for developing advanced technology and intensify prawn culture in India. The export earning from prawn and prawn products has increased tremendously during the last 25 years.

They occur in coastal waters. Penaeus indicus (Indian prawn) and Penaeus monodon (Giant tiger prawn) are the important species of Indian coast. The marine penaeid prawns are also called as shrimps. The mature shrimp breeds in deep sea. Most of the developmental stages are spent in estuaries and backwaters. 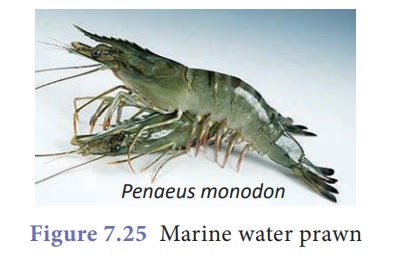 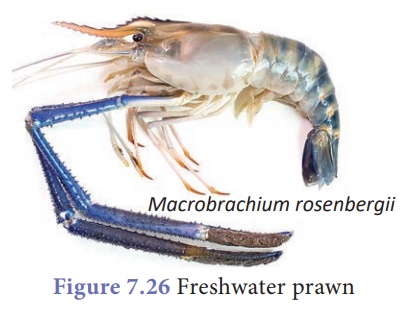 A number of species of prawns of different sizes are found distributed in water resources. Only those prawns which are good in size, weight, available in plenty and easily cultivable are commonly selected for prawn culture on commercial basis.

The rearing of freshwater prawn is called fresh water prawn culture. Macrobrachium rosenbergii and Macrobrachium malcomsonii can attain a maximum length of 20 and 15 cms respectively when fully grown.

a. Seed collection and hatchery method

The larvae and juveniles obtained by collection from natural resources (estuaries, lagoons and backwaters) or by hatchery methods (controlled breeding) are reared and grown into adults with supplementary feeding.

It is also called Pokkali culture. It is the oldest and traditional method of prawn culture practiced in Kerala. The low lying paddy fields along the coastal areas serve as suitable grounds for prawn culture. It is the practice of rearing prawns as ‘secondary crop’ in paddy fields. Prawns are cultured in these fields after the harvest of paddy. Both freshwater and marine prawns are cultured by this method based on their required salinity conditions. 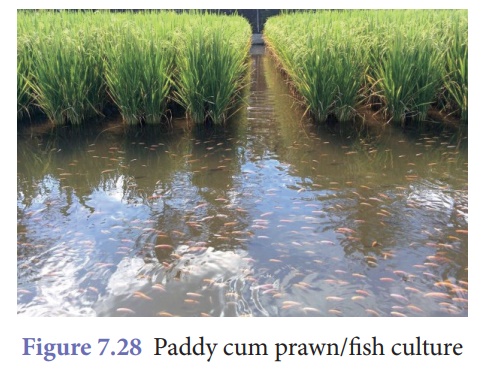 Apart from being a delicacy, prawns are a rich nutritive source of protein, vitamin A and D, glycogen and amino acids. They contain less amount of fat. Cultured prawns also provide polyunsaturated fatty acid (PUFA) which plays an important role in health and weight maintenance.