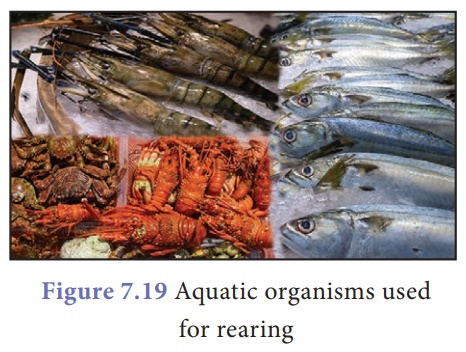 Aquaculture is classified into:

The classification is made based on the salinity of the respective culture system.

The rearing of aquatic organisms in freshwater is called freshwater aquaculture. The salinity of this water is less than 0.5 ppt (parts per thousand). Culture of organisms is carried out in pond, river, dam, lake and cold water. These freshwater resources remain within the land. Tilapia, carps (Catla, Rohu, Mrigal), catfishes, and air breathing fishes are cultured in freshwater. 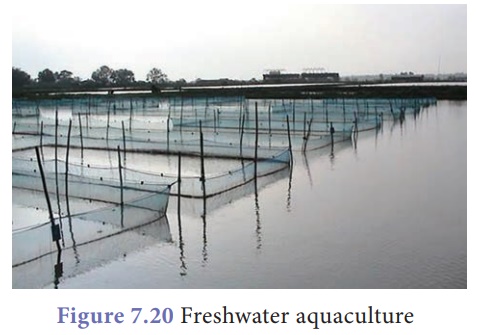 The cultivation of aquatic organisms is in sea water. This is also referred as Mariculture or Sea farming. The salinity of water ranges from 30 to 35 ppt. Culture of organisms is carried out along the sea coast (inshore area) and in deep sea. Organisms like shrimps (marine prawns), pearl oysters, edible oysters, mussels and fin fishes like salmons, trouts, sea bass, murrels, milk fishes and mullets are cultured in marine water.

Brackish water is where sea water and freshwater mix together such as estuaries, lagoons and backwaters. The organisms are cultured in water where the salinity is more than 1 and less than 32 ppt. The important organisms cultured are Tilapia, spiny lobsters, crabs, marine prawns and milk fishes.

Aquaculture has become the fastest growing food producing sector to meet the demand of food and nutrition to the growing population through increased production from aquatic food resources. It aims at blue revolution. It is a major source of export and foreign exchange earnings for the country. It generates employment through fish farming in rural and under developed area.

It increases food supply and enhances nutritional status of people who rely on freshwater and marine water edible food resources. These cultured organisms are a valuable source of animal protein and also rich in vitamins and minerals.