Anatomy of the Female Reproductive System

The female reproductive system consists of external and internal structures.

ANATOMY OF THE FEMALE REPRODUCTIVE SYSTEM

The external genitalia (the vulva) include two thick folds of tissue called the labia majora and two smaller lips of delicate tissue called the labia minora, which lie within the labia majora. The upper por-tions of the labia minora unite, forming a partial covering for the clitoris, a highly sensitive organ composed of erectile tissue. Be-tween the labia minora, below and posterior to the clitoris, is the urinary meatus. This is the external opening of the female urethra and is about 3 cm (1.5 inches) long. Below this orifice is a larger opening, the vaginal orifice or introitus (Fig. 46-1). On each side of the vaginal orifice is a vestibular (Bartholinâ€™s) gland, a bean-sized structure that empties its mucous secretion through a small duct. The opening of the duct lies within the labia minora, external to the hymen. The area between the vagina and rectum is called the perineum. 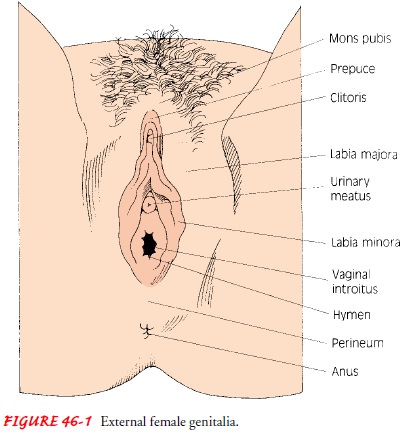 The internal structures consist of the vagina, uterus, ovaries, and fallopian or uterine tubes (Fig. 46-2). 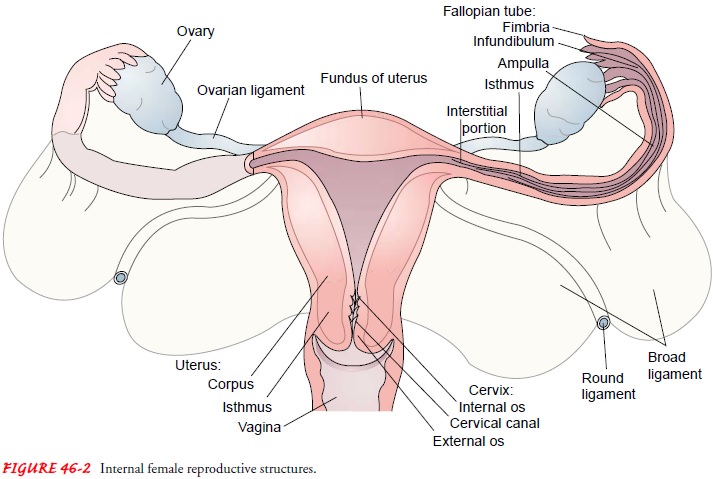 The vagina, a canal lined with mucous membrane, is 7.5 to 10 cm (3 to 4 inches) long and extends upward and backward from the vulva to the cervix. Anterior to it are the bladder and the urethra, and posterior to it lies the rectum. The anterior and posterior walls of the vagina normally touch each other. The upper part of the vagina, the fornix, surrounds the cervix (the inferior part of the uterus).

The uterus, a pear-shaped muscular organ, is about 7.5 cm (3 inches) long and 5 cm (2 inches) wide at its upper part. Its walls are about 1.25 cm (0.5 inch) thick. The size of the uterus varies, depending on parity (number of viable births) and uterine abnormalities (eg, fibroids, which are a type of tumor that may distort the uterus). A nulliparous woman (one who has not com-pleted a pregnancy to the stage of fetal viability) usually has a smaller uterus than a multiparous woman (one who has com-pleted two or more pregnancies to the stage of fetal viability). The uterus lies posterior to the bladder and is held in position by sev-eral ligaments. The round ligaments extend anteriorly and later-ally to the internal inguinal ring and down the inguinal canal, where they blend with the tissues of the labia majora. The broad ligaments are folds of peritoneum extending from the lateral pelvic walls and enveloping the fallopian tubes. The uterosacral ligaments extend posteriorly to the sacrum. The uterus has two parts: the cervix, which projects into the vagina, and a larger upper part, the fundus or body, which is covered posteriorly and partly anteriorly by peritoneum. The triangular inner portion of the fundus narrows to a small canal in the cervix that has con-strictions at each end, referred to as the external os and internal os. The upper lateral parts of the uterus are called the cornua. From here, the oviducts or fallopian (or uterine) tubes extend outward, and their lumina are internally continuous with the uterine cavity.