The term “adrenergic” originally referred to the effects of epinephrine (adrenaline), although nor-epinephrine (noradrenaline) is the primary neu-rotransmitter responsible for most of the adrenergic activity of the sympathetic nervous system. 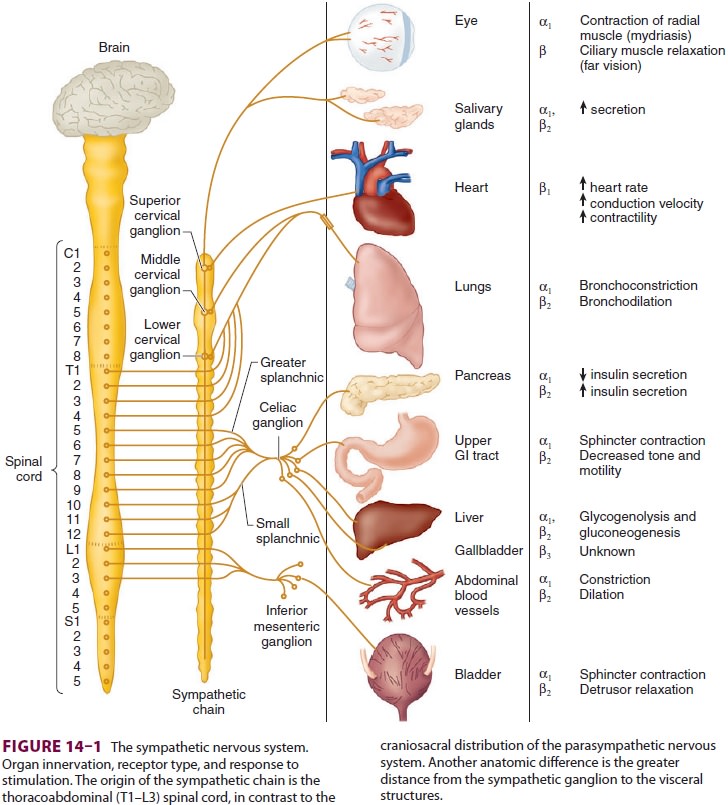 Norepinephrine is synthesized in the cyto-plasm of sympathetic postganglionic nerve end-ings and stored in the vesicles (Figure 14–2). After release by a process of exocytosis, the action of norepinephrine is primarily terminated by reup-take into the postganglionic nerve ending (inhib-ited by tricyclic antidepressants), but also by diffusion from receptor sites, or via metabolism by monoamine oxidase (inhibited by monoamine oxidase inhibitors) and catechol-O-methyltransfer-ase (Figure 14–3). Prolonged adrenergic activation leads to desensitization and hyporesponsiveness to further stimulation. 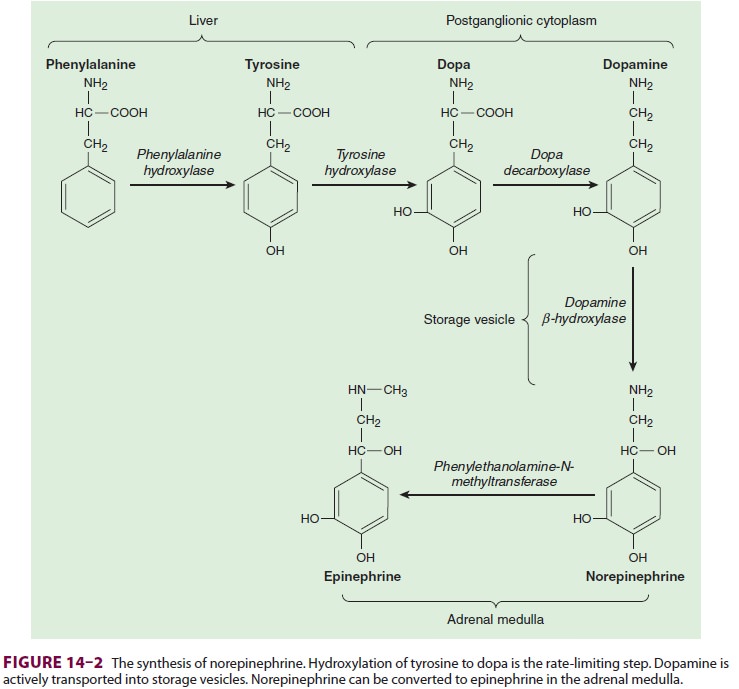 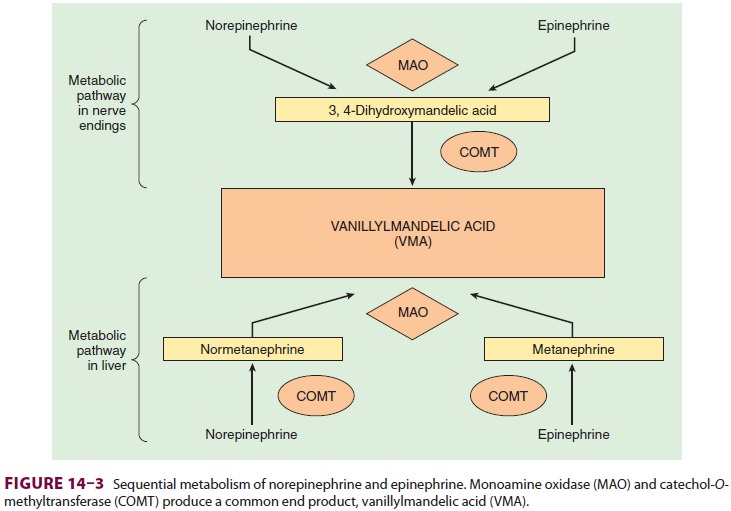 Adrenergic receptors are divided into two gen-eral categories: α and β. Each of these has been fur-ther subdivided into at least two subtypes: α1 and α2, and β1, β2, and β3. The α-receptors have beenfurther divided using molecular cloning techniques into α1A, α1B, α1D, α2A, α2B, and α2C. These receptors are linked to G proteins ( Figure 14–4; Drs. Rodbell and Gilman received the Nobel Prize in physiology or medicine in 1994 for their discovery)—heterotri-meric receptors with α, β, and γ subunits. The differ-ent adrenoceptors are linked to specific G proteins, each with a unique effector, but each using guano-sine triphosphate (GTP) as a cofactor. α1 is linked to Gq, which activates phospholipases; α2 is linked to Gi, which inhibits adenylate cyclase, and β is linked to Gs, which activates adenylate cyclase. 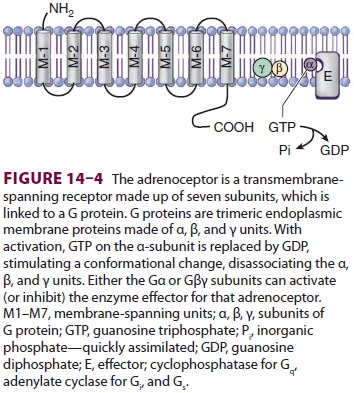 α1-Receptors are postsynaptic adrenoceptorslocated in smooth muscle throughout the body (in the eye, lung, blood vessels, uterus, gut, and geni-tourinary system). Activation of these receptors increases intracellular calcium ion concentration, which leads to contraction of smooth muscles. Thus, α1-agonists are associated with mydriasis (pupil-lary dilation due to contraction of the radial eye muscles), bronchoconstriction, vasoconstriction, uterine contraction, and constriction of sphincters in the gastrointestinal and genitourinary tracts. α1-stimulation also inhibits insulin secretion andlipolysis. The myocardium possesses α1-receptors that have a positive inotropic effect, which might play a role in catecholamine-induced arrhythmia. During myocardial ischemia, enhanced α1-receptor coupling with agonists is observed. Nonetheless, the most important cardiovascular effect of α1-stimulation is vasoconstriction, which increases peripheral vascular resistance, left ventricular after-load, and arterial blood pressure.

β3-Receptors are found in the gallbladder and brainadipose tissue. Their role in gallbladder physiology is unknown, but they are thought to play a role in lipolysis and thermogenesis in brown fat.

Dopamine (DA) receptors are a group of adrener-gic receptors that are activated by dopamine; these receptors are classified as D1 and D2 receptors. Acti-vation of D1 receptors mediates vasodilation in the kidney, intestine, and heart. D2 receptors are believed to play a role in the antiemetic action of droperidol.