Adrenergic agonists interact with varying specificity (selectivity) at α- and β-adrenoceptors (Tables 14–1 and 14–2).

Overlapping of activity complicates the predic-tion of clinical effects. For example, epinephrine stimulates α1-, α2-, β1-, and β2-adrenoceptors. Its net effect on arterial blood pressure depends on the balance between α1-vasoconstriction, α2- and 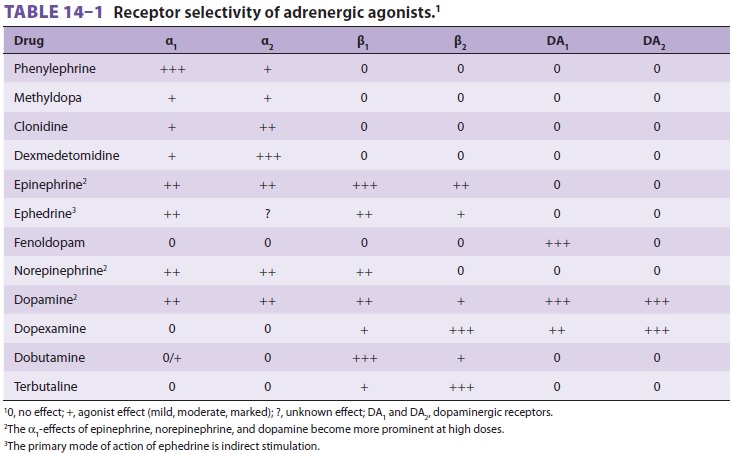 Adrenergic agonists can be categorized as direct or indirect. Direct agonists bind tothe receptor, whereas indirect agonists increase endogenous neurotransmitter activity. Mecha-nisms of indirect action include increased release or decreased reuptake of norepinephrine. The differ-entiation between direct and indirect mechanisms of action is particularly important in patients who 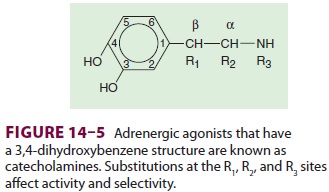 have abnormal endogenous norepinephrine stores, as may occur with use of some antihypertensive medications or monoamine oxidase inhibitors. Intraoperative hypotension in these patients should be treated with direct agonists, as their response to indirect agonists will be altered.

Another feature distinguishing adrenergic ago-nists from each other is their chemical structure. Adrenergic agonists that have a 3,4-dihydroxyben-zene structure (Figure 14–5) are known as cat-echolamines. These drugs are typically short-acting because of their metabolism by monoamine oxidase and catechol-O-methyltransferase. Patients taking monoamine oxidase inhibitors or tricyclic antide-pressants may therefore demonstrate an exaggerated response to catecholamines. The naturally occurring catecholamines are epinephrine, norepinephrine, and DA. Changing the side-chain structure (R 1, R2, R3) of naturally occurring catecholamines has led to the development of synthetic catecholamines (eg, isoproterenol and dobutamine), which tend to be more receptor specific.

Adrenergic agonists commonly used in anes-thesiology are discussed individually below. Note that the recommended doses for continuous infu-sion are expressed as mcg/kg/min for some agents and mcg/min for others. In either case, these recom-mendations should be regarded only as guidelines, as individual responses are quite variable.