Classifications based on syndromes or clusters of symptoms have been most favored. 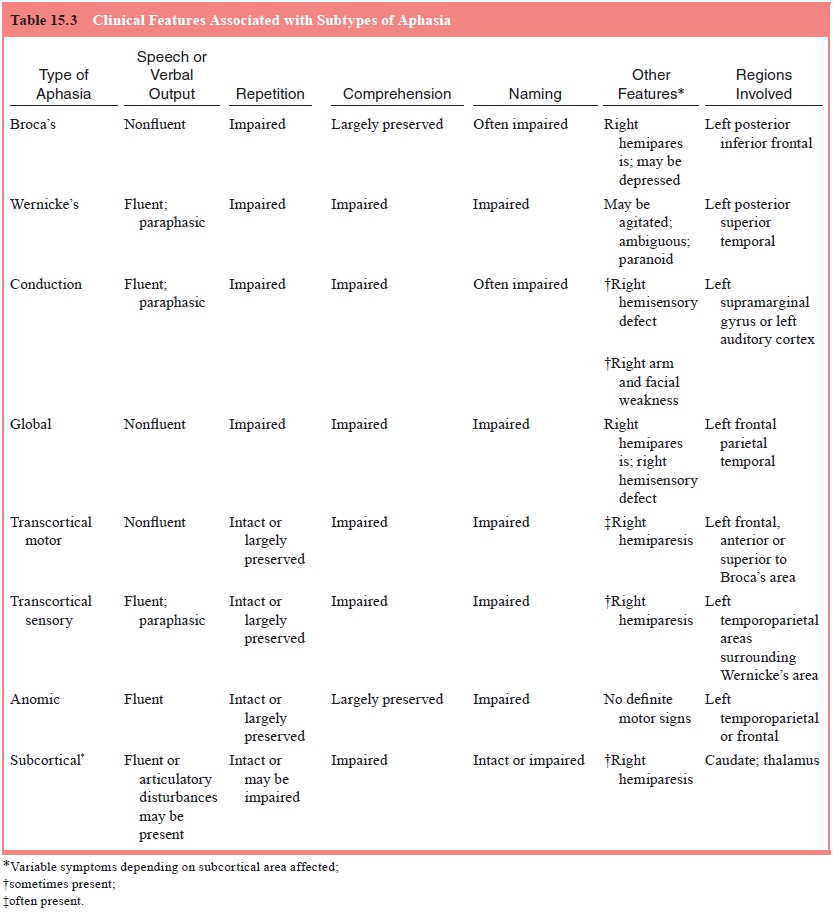 to several classification schemes for organizing clinical and research data on aphasia. Classifications based on syndromes or clusters of symptoms have been most favored. The major aphasia subtypes that are now widely accepted are presented in Table 15.3. The subtypes of aphasia have been further sub-divided in terms of their neuroanatomical loci into perisylvian (Brocaâ€™s, Wernickeâ€™s, conduction and global) and extrasylvian (transcortical-motor, transcortical-sensory, mixed, anomic and subcortical) aphasias (Benson and Geschwind, 1985). The impairment and preservation of the ability to repeat appear to coincide with this dichotomy. Figure 15.9 depicts some of the regions of the left cerebral cortex that are involved in language functioning. 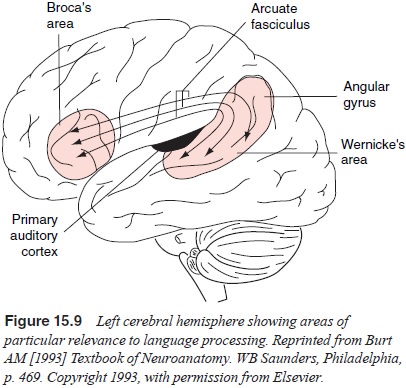 Computed tomographic studies have linked aphasia with left-sided lesions in areas lying outside the cerebral cortex. This finding suggests that language is also subserved by subcortical areas. Subcortical aphasia is characterized by mutism in the early stage of the disorder, followed by articulatory disturbances and paraphasic output. Paraphasia appears to resolve when the pa-tient has to repeat sentences. Comprehension is commonly im-paired, and other language disturbances may also be involved. One distinguishing feature of this type of aphasia is the transient nature of the severe language defects seen in the early stages (Benson and Geschwind, 1985). The neuropathology in subcorti-cal aphasia has been found to vary in terms of localization. Most commonly, subcortical aphasia is associated with lesions in the thalamus, caudate, and putamen (Naeser et al., 1982).

Some inconsistent findings have raised questions about the role of subcortical damage in aphasia. For example, it has been noted that aphasia can resolve even in the presence of persisting subcortical abnormalities. Conversely, in some cases, aphasia does not follow damage to subcortical areas. In some instances, evidence from functional neuroimaging studies has been used to understand such discrepancies. PET studies reveal that structural damage in an area might result in hypometabolism in distant, intact areas. Metter and coworkers (1987) found that aphasia was associ-ated with the presence of cortical hypometabolism after structural lesions in subcortical areas. Thus, there is some suggestion that changes in cortical hypometabolism accompanying subcortical le-sions might be a factor associated with the presence or absence of aphasia rather than the lesion in the subcortical region.