Once the hairpin secondary structure in the RNA immediately preced-ing the trp attenuation site was associated with transcription termina-tion, several critical experiments were apparent.

Once the hairpin secondary structure in the RNA immediately preceding the trp attenuation site was associated with transcription termina-tion, several critical experiments were apparent. One was to examine the consequences of changing the sequence of the region. Mutations changing the stability of the hairpin might be expected to alter termination efficiency. A second and easier experiment was to examine naturally occurring sequence variants. Because related bacterial strains must have evolved from a common predecessor, they probably share the same basic mechanism of trp regulation. If the leader sequences of their trp operons possess structural features in common, these features are likely to be important in the regulatory mechanisms. Indeed, this was found. The trp operon in Salmonella typhimurium and Serratiamarcescens also contain leader regions. Both code for a leader peptidecontaining several tryptophans, and both mRNAs are capable of form-ing a hairpin just before a string of U’s located about 20 bases ahead of the trpE gene.

Close examination of the leader region of the trp operon of E. coli, the trp operons from other strains of bacteria, and other amino acid biosynthetic operons has revealed two additional facts. First, the pep-tides encoded by the leader regions always contain one to seven of the amino acid residues synthesized by that operon. Second, the leader mRNAs possess at least four regions that can form intramolecular base-paired hairpins (Fig. 13.11). Here they are numbered 1, 2, 3, and

Figure 13.11 The two possible structures that the second half of thetrpleaderregion is capable of assuming. Above is indicated the leader region with the complementary regions. Opposed arrows at the same height above the leader are homologous and can base pair. The wavy line below the leader mRNA is the region encoding the leader peptide. 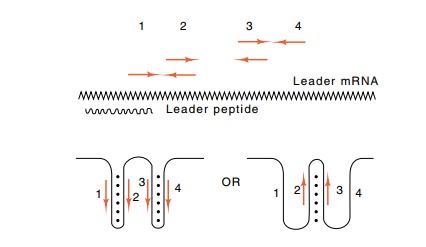 4. The pairing of 3 and 4 forms the hairpin discussed above that is required for termination of transcription. Additionally, region 2 can base pair either with region 3 or with region 1. Likewise, region 3 can base pair with region 2 or 4. The particular hybrids that form on a leader molecule determine whether transcription of that molecule will termi-nate as RNA polymerase passes the attenuation region. As we will see, the pairing choice is regulated by the position on the leader of a ribosome translating the leader peptide.