Early Explorations of the Hypersynthesis

The experiments described in this section were performed before the development of modern genetic engineering.

Early Explorations of the Hypersynthesis

The experiments described in this section were performed before the development of modern genetic engineering. It is interesting to see how Yanofsky and his collaborators cleverly utilized the technology available at the time to learn the source of the hypersynthesis and thereby discover the phenomenon of attenuation. The first question in their careful investigation was whether the hypersynthesis in the internal deletion strains mentioned above resulted from an alteration in the levels of messenger. Either more messenger was present in the deletion strains or messenger was being translated more efficiently. The path of subsequent experiments depended on which it was. 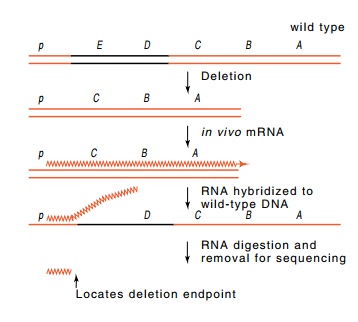 Figure 13.8 RNA synthesizedfrom a deletion, hybridized to wild-type DNA, and digested with RNAse can reveal the deletion end point.

Messenger RNA in cells was briefly labeled with tritiated uridine, extracted, and hybridized to complementary trp DNA immobilized on paper. Trp-containing DNA was available in the form of φ80 and λ phage in which part of the phage genome was substituted with trp sequences. Use of such phage containing all or part of the trp operon substituted for the use of fragments that today would be isolated by restriction enzyme cleavage of an appropriate plasmid or by PCR amplification using appropriate primers and crude E. coli DNA as template. The hybridization revealed that in all strains, the levels of trpB messenger paralleled the levels of TrpB enzyme. Therefore the cause of trp enzyme hypersynthesis in some of the internal deletion strains was elevated messenger levels.

Some of the internal deletion strains hypersynthesized the TrpB protein and messenger and some did not. Hence it was important to learn whether the effect could be correlated with the extent of the deletion. This was particularly important because sequencing of trp messenger had revealed that the trp operon contained an unexpectedly long leader of 162 bases between the start of transcription and the translation start of the first trp enzyme.

The deletion end points were determined by isolating trp messenger synthesized in vivo by the deletion strains. Total RNA from the deletion strains was isolated and hybridized to wild-type trp DNA (Fig. 13.8). The region of complementarity between the RNA and DNA was resistant to RNAse. After the digestion, this region was then melted off the DNA and the exact extent of trp-specific sequence obtained from each deletion was apparent on RNA sequencing. RNA sequencing was used since DNA sequencing techniques had not yet been invented. It was found that only those deletions that removed a site located 20 nucleotides before the trpE gene hypersynthesized TrpB protein. 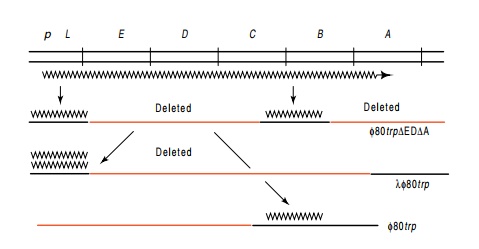 Figure 13.9 Two-step hybridization for determination of the relative amountsof trpL and trpB mRNA in cells. Messenger from the trp operon as indicated on the top line is hybridized to phage DNA carrying part of the trp operon. RNA eluted from the first phage was then hybridized to phage containing sequences homologous to either the leader region or the trpB region of the operon.

far as 100 nucleotides downstream from the promoter. More likely, the deletions removed a site located 20 bases ahead of the start of the trpE gene that terminated most transcription before it entered the trp struc-tural genes. This idea was tested by comparing the amount of trp messenger specified by a sequence lying upstream of the trpE gene and upstream of the potential termination site to the amount of messenger specified by sequences downstream from the site (Fig. 13.9). The down-stream messenger contained the trpB region of the operon. A two-step hybridization permitted quantitation of messenger RNA in cells from each of these regions. This experiment provided the telling clue. Wild-type repressed cells as well as trpR- cells contained an eight-to-ten-fold molar excess of messenger from the leader region preceding the trpE gene over messenger from the trpB region. In cells deleted of only the critical region just ahead of the trpE gene, the amount of trpB messenger was elevated and was nearly comparable to the amount of trpL RNA. These results prove that, indeed, termination occurs at the site 20 bases ahead of the trpE gene and that under normal conditions a majority of the transcription does not enter the trp structural genes. The site at which termination occurs is called trp a. 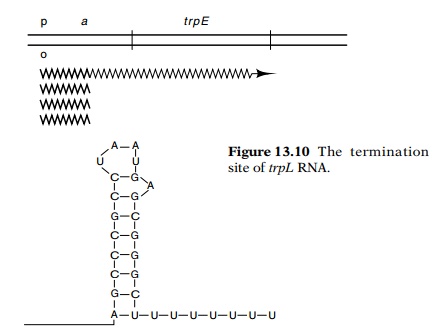 The obvious and most important question to ask at this point was whether transcriptional termination, which ordinarily permitted only one in eight to ten polymerases to transcribe into the trp structural genes, was regulated or whether the efficiency of termination at trp a was independent of growth conditions. This was tested by starving for tryptophan and examining the attenuation level. Suitable starvation was generated by the addition of indolylacrylic acid that inhibits both tryptophan synthesis and tryptophanyl-tRNA synthetase. It did decrease termination, and thus termination at trp a is regulated, and is called attenuation. Starvation for other amino acids did not decrease termina-tion at trp a, thereby proving that termination does play a regulatory role in the trp operon.

In vitro transcription of the trp operon DNA was the logical next stepin these studies. The trp RNA from such experiments could be quanti-tated by its synthesis from φ80 and λ-trp phage and appropriate RNA-DNA hybridizations. These showed that virtually all transcripts ended at the point identified in the in vivo experiments as responsible for termination. The sequence of this region showed that it resembles other sequences at which RNA transcription terminates (Fig. 13.10). It con-tains a G-C-rich region that can form a hairpin followed by a string of eight U’s.

The leader region also contains an AUG codon and can bind ribo-somes just like the beginning of authentic genes. This was shown by the straightforward but technically difficult experiment of isolating radio-active leader region RNA from cells, binding ribosomes to it in the presence of initiation factors and f-met-tRNAfmet, lightly digesting with RNAse, and sequencing the RNA that was protected from digestion. Following the AUG codon are 13 more codons before a translation termination codon. Clearly it was of great interest to determine whether this leader peptide is synthesized in vivo. Vigorous attempts to isolate it failed, however. Therefore an indirect experiment was used to prove that the leader is translated. The leader peptide region was fused by deletion to the lac repressor gene, and the corresponding fusion protein was found to be synthesized at a high rate. Since the leader peptide contains two tryptophans, termination efficiency appeared to be coupled to translation. This suspicion was deepened by the findings that trp regulation is altered in some trp synthetase mutants.