The discovery of polarity is an illustration of the fact that frequently the most important discoveries result from attempting to solve some other problem.

The discovery of polarity is an illustration of the fact that frequently the most important discoveries result from attempting to solve some other problem. Polarity is the decrease in the expression of a gene downstream in an operon from a nonsense mutation. This phenomenon commanded the attention of many molecular biologists from 1970 to about 1976. Experiments by Yanofsky and Jackson at this time were designed to study the phenome-non of polarity by locating within the trp operon any elements that affected polarity. They sought to isolate deletions that eliminated the polar effects of a mutation near the beginning of the operon on the expression of a gene near the end of the operon. As deletions are rare to begin with, special selections and scorings must be used to identify cells containing the desired deletion. The basic selection method was to use conditions in which polarity reduced expression of a promoter-distal trp gene to the extent that cells could not grow and then to select for secondary mutants that could grow. Among them would be deletions

Figure 13.6 How an internaltrpdeletion can relieve polarity generated by apolar trpE mutation and increase expression of the trpB gene.

removing any elements that generated polarity. Scoring by replica plating onto petri plates spread with lawns of phage carrying parts of the trp operon then identified the candidates containing deletions internal to the trp operon.

The last two genes of the tryptophan operon, trpA and trpB, code for the α and β subunits of tryptophan synthetase. This enzyme normally has an α2β2 structure. The synthetase from a trpA mutant has a β2 structure. This dimer possesses part of the enzyme’s normal activity and catalyzes the conversion of indole and serine to tryptophan and water at about 3% the rate that the wild-type enzyme catalyzes the conversion of serine and indole-3-glycerol phosphate to tryptophan and water. The activity of the β2 complex is such that if indole is present in the growth medium, tryptophan can be synthesized at a rate sufficient to supply the cells’ tryptophan requirements. The reduction in expression of the trpB gene in a trpA mutant strain containing a polar trpE mutation leavesthe cells unable to convert indole to tryptophan at a rate adequate for growth (Fig. 13.6). Under these conditions, a deletion of the trpE mutation that does not include the trp promoter and the trpB gene relieves the polarity on trpB expression and permits cells to satisfy their tryptophan requirements with indole. Amongst the indole+ colonies will be deletions of various sizes. One test was determining their sizes.

Candidates were scored for loss of the trpD and trpC genes with special phage that carried copies of these genes, but with mutations in the genes. The phage can infect cells, but many cells are not lysed. Often the phage either recombine into the chromosome or simply remain in the cell for several generations until diluted away by cell growth. While present in the cells, the phage can recombine with homologous DNA on the host chromosome if it is present. Thus, cells that retain trpD or trpC can reconstruct a functional trpD or trpC genes on some copies of the phage. These can subsequently be detected by replica plating onto another lawn of trpC or trpD mutant cells. By these means Jackson and Yanofsky identified many internal deletions in the trp operon that relieved polarity. We might have expected that fusions of the trpB gene to other genes of the chromosome might also have occurred, but, curiously, none were found. 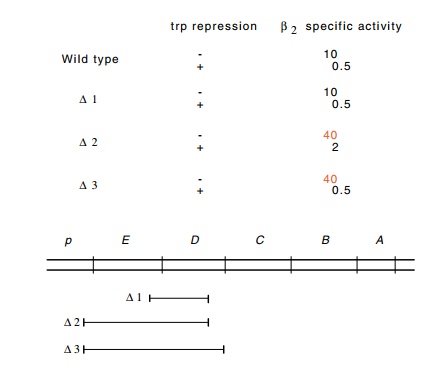 Figure 13.7 The specific activity of theβ2 protein of thetrpoperon in thepresence and absence of trp repressor in wild-type cells and in cells containing the three different deletions indicated.

Out of 34 internal deletions that had removed polarity on the expres-sion of the trpB gene, all were still regulated by the Trp repressor. Most unexpectedly, two deletion strains hypersynthesized the TrpB protein by a factor of three to ten; each of these was deleted of all of the trpE gene (Fig. 13.7). The source of this hypersynthesis was then examined more carefully, as described in the next section.