Point mutations provide excellent support for the attenuation mechanism as outlined above. Changing the AUG codon of the leader to an AUA has the expected effect .

Point mutations provide excellent support for the attenuation mechanism as outlined above. Changing the AUG codon of the leader to an AUA has the expected effect (see Problem 13.2). A base change abolishing a base pair in the 2-3 hybrid, but one having no effect on the base pairs of hybrids 1-2 or 3-4 prevents the leader from forming the 2-3 hybrid. Consequently, the 3-4 hybrid always forms, and termination inevitably results. Mutations that reduce the stability of the 3-4 hybrid reduce transcription termination, both in vitro and in vivo.

Direct experiments also provide evidence for the existence of secondary structure in the leader RNA. Light digestion of the RNA with RNAse T1 cleaves only at those guanosines postulated not to be in the hybrids (Fig. 13.13). A second experiment also suggests that base pairing in the leader region is important. As mentioned above, in an in vitro transcription system with purified DNA and RNA polymerase, virtually all tran-scripts are terminated at the attenuation site. The substitution of inosine triphosphate (ITP) for GTP however, eliminates the premature termi-

nation. While it is possible that specific contacts between the inosine and RNA polymerase or between the inosine and the DNA are respon-sible for the lack of termination, it seems more likely that the failure of the substituted RNA to form its 3-4 hybrid is the reason. Whereas G-C base pairs possess three hydrogen bonds, I-C base pairs have only two 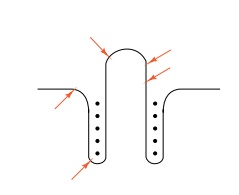 Figure 13.13 The points of RNAseT1 cleavage of the leader RNA with respect to the 1-2 and 3-4 hybrid structure that likely forms on na-ked trp leader RNA in vitro. 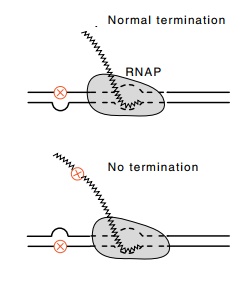 because inosine lacks an amino group that is present on guanosine. The two hydrogen bonds do not provide sufficient energy to form the usual hybrids, and thus termination does not occur. Analogs incorporated into the DNA generate much smaller perturbations on termination, also suggesting that it is the base-paired structure of the transcribed RNA that is necessary for termination at the attenuation site. The use of DNA molecules heteroduplex in the leader region also yields data consistent with the attenuation mechanism. DNA molecules can be constructed that are wild-type on one strand and mutant in a single base in the leader region on the other (Fig. 13.14). Only when the mutation is on the strand copied by RNA polymerase and therefore producing an altered RNA product molecule does the mutant nucleotide alter attenuation. If the RNA product is wild-type, so is transcription and termination.

Finally, direct physical evidence for the attenuation model has also been obtained. In an in vitro transcription system, the usual termination at the attenuator can be blocked by including a large excess of an oligonucleotide complementary to region 1. Apparently this oligonu-cleotide anneals to region 1 as it is synthesized and prevents its pairing with region 2. Consequently, the 2-3 hairpin forms, and the 3-4 hairpin, which is required for termination, cannot form. Therefore, termination does not occur.