Attenuation and the trp Operon

The first chemical reaction common to the synthesis of tryptophan, tyrosine, and phenylalanine is the condensation of erythrose-4-P and phosphoenolpyruvate to form 3-deoxy-D-arabino-heptulosonate-7-P, DAHP, a reaction catalyzed by DAHP synthetase.

The Aromatic Amino Acid Synthetic Pathway and its Regulation

The first chemical reaction common to the synthesis of tryptophan, tyrosine, and phenylalanine is the condensation of erythrose-4-P and phosphoenolpyruvate to form 3-deoxy-D-arabino-heptulosonate-7-P, DAHP, a reaction catalyzed by DAHP synthetase (Fig. 13.1). Due to its position at the head of the aromatic amino acid biosynthetic pathway and to the fact that this reaction is irreversible, it is logical that this reaction should be a key point of regulation. Indeed, this expectation is met. Escherichia coli regulates both the amount and activity per mole-cule of DAHP synthetase as a function of the intracellular levels of the aromatic amino acids.

Figure 13.1 Outline of the aromatic amino acid biosynthetic pathway inEscherichia coli. Each arrow represents an enzymatic step. Tryptophan feed-back inhibits one of the DAHP synthetases, AroH, as well as the first enzyme of the pathway committed to tryptophan synthesis. 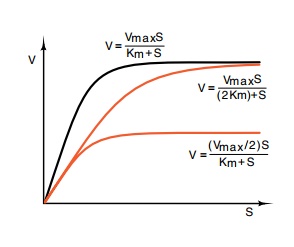 A double regulation of total DAHP synthetase activity is logical. While regulation of the enzyme level minimizes unnecessary consumption of amino acids and energy in the synthesis of the enzyme, this type of regulation is incapable of producing appreciable changes in the enzyme levels or of total enzyme activity on time scales shorter than minutes. A much more rapidly-responding regulation mechanism is also necessary to adjust the synthesis rates of tryptophan, tyrosine, and phenylalanine on time scales of seconds.

In addition to stabilizing the activity of the synthetic pathway against random fluctuations, a rapidly responding regulation would fine-tune the biosynthetic flow rates of the aromatic amino acids and would be able to respond rapidly to growth rate changes generated by changes in the nutrient medium. Feedback inhibition of an enzyme’s activity meets the requirements, as this mechanism can alter an enzyme’s activity in milliseconds.

Feedback inhibition is an example of an allosteric interaction in which accumulation of the product of the pathway leads to inhibition of the activity of an enzyme in that pathway. This is a specific example of an allosteric interaction in which a molecule dissimilar in shape to the substrates of an enzyme can bind to the enzyme, usually at a site on the enzyme far from the active site, and can generate conformational changes that alter the catalytic activity of the enzyme. Feedback inhibi-tion can reduce an enzyme’s activity in either of two fundamental ways (Fig. 13.2). The tryptophan-sensitive DAHP synthetase is feedback-in-hibited largely as a result of a change in its Vmax, whereas the first enzyme of the pathway used solely for tryptophan synthesis, anthra-nilate synthetase, is an example of the other possibility. It is feedback-inhibited by tryptophan via a change in its Km.

This is an example of the fact that different microorganisms possess different overall schemes for the regulation of tryptophan synthesis. On one hand, it is possible that the different evolutionary niches occupied by different microorganisms require these different schemes. On the other hand, perhaps one scheme is no better than another, and the different ones just happened to have evolved that way. Either way, this diversity means that the overall scheme for regulation of tryptophan synthesis in E. coli is not the only one that works.