The tryptophan operon consists of five genes that code for the enzymes unique to the synthesis of tryptophan, trpE, D, C, B, and A .

The tryptophan operon consists of five genes that code for the enzymes unique to the synthesis of tryptophan, trpE, D, C, B, and A (Fig. 13.3). In addition, the trpR gene codes for a repressor that helps regulate expression of these genes. TrpR repressor protein bound to the trp operator blocks access of RNA polymerase to the promoter. Since this repressor binds to trp operator far better in the presence of its corepres-sor tryptophan than in its absence, the transcription of the trp genes is repressed in the presence of excess tryptophan and derepressed during times of tryptophan deficiency.

A classical repression mechanism, in which the repressor protein blocks binding or initiation by RNA polymerase, is adequate for meeting part of the regulatory requirements of the tryptophan operon. Such a regulation mechanism, however, cannot monitor the overall capability of the cell to synthesize protein, and it would permit trp mRNA synthesis whenever tryptophan was in short supply, even when protein synthesis was impossible. Such a mechanism is not adequate for regulating an

Figure 13.3 Thetrpoperon that codes for the enzymes necessary for theconversion of chorismate to tryptophan. Shown is the operator, o; promoter, p; leader region, trpL; and the positions within the operon of the five trp structural genes. 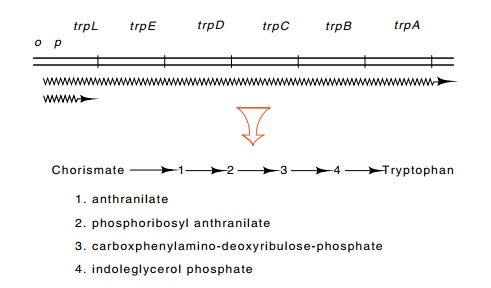 TrpR represses synthesis of messenger for aroH, which encodes DAHP synthetase messenger as well as the trp operon messenger. For both, in the presence of tryptophan, it binds to DNA and blocks RNA polymerase from binding to the promoter. An interesting variation is shown between the two promoters. In the trp operon, the operator is centered around the -10 region of the RNA polymerase binding site, whereas in the aroH operon, the repressor-binding site is located around the -35 region. Since both of these operators are similar, the -10 region of the trp promoter and the -35 region of the aroH promoter can only weakly resemble the sequences typical of these regions in active pro-moters (Fig. 13.4). Apparently to compensate for this drastic alteration in part of the RNA polymerase-binding site, the other portions of the RNA polymerase-binding sites of these two promoters are homologous to highly active consensus promoter sequences.

In addition to regulating the trp operon and aroH, TrpR repressor in the presence of tryptophan also represses its own synthesis. As we will see, the consequences of this self-repression are that the cellular levels of the trp enzymes can rapidly increase to optimal levels following tryptophan starvation. The ara operon uses a positive-acting regulation mechanism to generate a rapid induction response followed by a lower steady-state response as catabolite repression turns down induction once catabolism of arabinose begins. The, trp operon achieves a rapid response using only negative-acting elements.

How is the rapid enzyme induction accomplished? Consider cells growing in the presence of excess tryptophan. In such a case the trp operon, trpR, and aroH genes are all repressed, but not fully off. A balance is maintained such that the level of TrpR repressor represses the trpR gene so as to maintain that level. Upon tryptophan starvation, these genes are all derepressed, and the gene products are synthesized 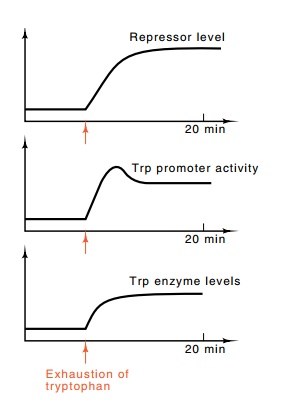 at a high rate (Fig. 13.5). As the intracellular concentration of TrpR repressor and tryptophan itself both increase, appreciable repression can set in, and transcription of the three sets of genes decreases. Finally, when steady state has been reached in minimal medium lacking tryp-tophan, the trp operon is 90% repressed, in part because the level of trp repressor is much higher than it is in the presence of tryptophan.