Piers and wharves are permanent structures built in protected harbors. They are built using timber, concrete, or steel. Petroleum base terminals in developed theaters have piers (Figure 4-1) or wharves equipped to load and unload tankers and barges.

Piers and wharves are permanent structures built in protected harbors. They are built using timber, concrete, or steel. Petroleum base terminals in developed theaters have piers (Figure 4-1) or wharves equipped to load and unload tankers and barges. Piers or wharves may have single-length berths or multiple-length berths. A single-length berth (Figure 4-2) is 60 to 80 feet longer than the largest tanker that uses it. A multiple-length berth (Figure 4-3) should be 110 to 130 feet longer than the combined lengths of the largest tankers that use it. No vessel should be allowed to dock or moor within 50 feet of a vessel that is unloading bulk cargo, unless the depot officer or supervisor and the master of the vessel transferring cargo agree. 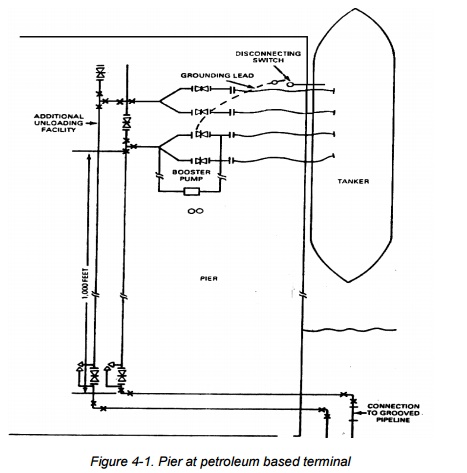 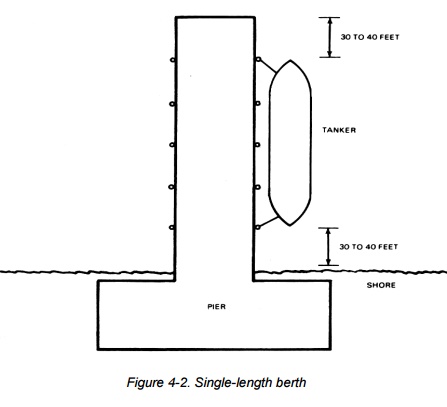 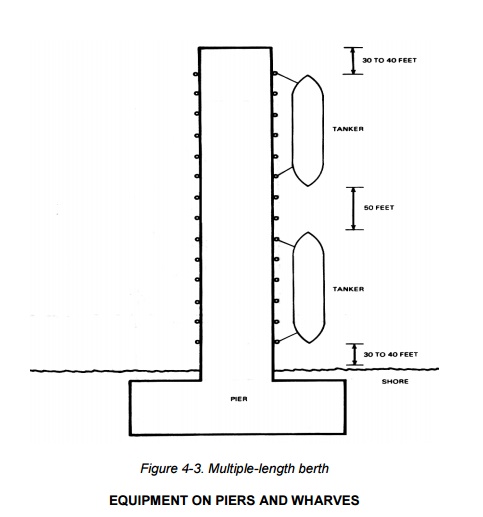 EQUIPMENT ON PIERS AND WHARVES

Piers and wharves at base terminals are equipped with ship-to-shore hoselines; standard 4-, 6-, 8-, or 12-inch pipelines; a loading and unloading manifold; valves; and fittings. Booster pump stations are installed where needed. Each facility should have at least one ballast tank with separate pipelines to receive and discharge water and an oil and water separator to remove product from ballast water during a transfer. A supply of water (preferably fresh water) and fire-fighting equipment must be available at all times. The equipment should include fire hoses, foam generators, and foam and carbon dioxide fire extinguishers. If there is a source of steam, it can be used to fight a fire in a confined space, such as a tanker compartment. Also, all piers and wharves must have the proper grounding connections for fuel transfer operations.

A self-elevating pier (Figure 4-4) is a steel barge which must be towed into place. It has jacks, caissons, and machinery that raise the pier above the water to form a working platform. Depending upon navigable conditions at the erection site, self-elevating pier may be employed as single piers butted against a beach or as finger, marginal, T-head, or L-head piers.  TM 55-500 discusses this pier in detail. 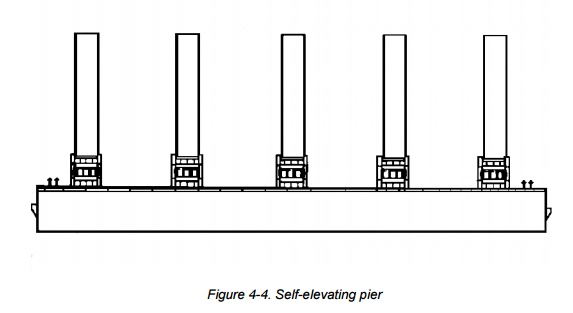 A pipeline jetty (Figure 4-5) is a structure made of pilings and timber that extends as far as 1,000 feet from the shore. It is only wide enough to support pipelines and to provide a walkway with a 40- by 70-foot working platform at the tanker end. The pipeline jetties are used in protected harbors to transfer fuel.

The TPT is the Army's bulk-fuel storage facility. It is a fuel-handling system designed to receive, store, and issue bulk petroleum fuels, specifically diesel fuel and jet fuels. The TPT serves as a base terminal in an undeveloped theater and can be used in the developed theater to supplement existing facilities that are inadequate or damaged. For more information see Chapter 6.