The AWT defines windows according to a class hierarchy that adds functionality and specificity with each level. The two most common windows are those derived from Panel, which is used by applets, and those derived from Frame, which creates a standard application window.

The AWT defines windows according to a class hierarchy that adds functionality and specificity with each level. The two most common windows are those derived from Panel, which is used by applets, and those derived from Frame, which creates a standard application window. Much of the functionality of these windows is derived from their parent classes. Thus, a description of the class hierarchies relating to these two classes is fundamental to their understanding. Figure 25-1 shows the class hierarchy for Panel and Frame. Let’s look at each of these classes now.

At the top of the AWT hierarchy is the Component class. Component is an abstract class that encapsulates all of the attributes of a visual component. Except for menus, all user interface elements that are displayed on the screen and that interact with the user are 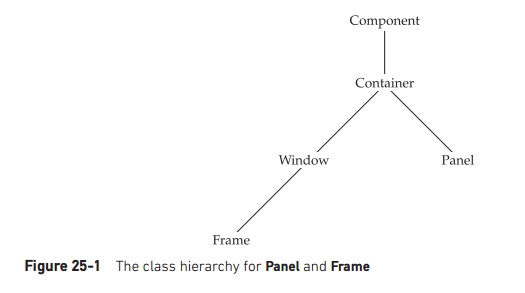 subclasses of Component. It defines over a hundred public methods that are responsible for managing events, such as mouse and keyboard input, positioning and sizing the window, and repainting. (You already used many of these methods when you created applets in Chapters 23 and 24.) A Component object is responsible for remembering the current foreground and background colors and the currently selected text font.

The Container class is a subclass of Component. It has additional methods that allow other Component objects to be nested within it. Other Container objects can be stored inside of a Container (since they are themselves instances of Component). This makes for a multileveled containment system. A container is responsible for laying out (that is, positioning) any components that it contains. It does this through the use of various layout managers, which you will learn about in Chapter 26.

The Panel class is a concrete subclass of Container. A Panel may be thought of as a recursively nestable, concrete screen component. Panel is the superclass for Applet. When screen output is directed to an applet, it is drawn on the surface of a Panel object. In essence, a Panel is a window that does not contain a title bar, menu bar, or border. This is why you don’t see these items when an applet is run inside a browser. When you run an applet using an applet viewer, the applet viewer provides the title and border.

Other components can be added to a Panel object by its add( ) method (inherited from Container). Once these components have been added, you can position and resize them manually using the setLocation( ), setSize( ), setPreferredSize( ), or setBounds( ) methods defined by Component.

The Window class creates a top-level window. A top-level window is not contained within any other object; it sits directly on the desktop. Generally, you won’t create Window objects directly. Instead, you will use a subclass of Window called Frame, described next.

Frame encapsulates what is commonly thought of as a “window.” It is a subclass of Window and has a title bar, menu bar, borders, and resizing corners. The precise look of a Frame will differ among environments. A number of environments are reflected in the screen captures shown throughout this book.

Although it is not part of the hierarchy for applet or frame windows, there is one other type of window that you will find valuable: Canvas. Derived from Component, Canvas encapsulates a blank window upon which you can draw. You will see an example of Canvas later in this book.
Study Material, Lecturing Notes, Assignment, Reference, Wiki description explanation, brief detail
Java The Complete Reference : The Java Library : Introducing the AWT: Working with Windows, Graphics, and Text : Window Fundamentals - AWT Classes |