Figure 20–5 shows an important difference in cardiac output control with and without a functioning auto-nomic nervous system. The solid curves demonstrate the effect in the normal dog of intense dilation of the peripheral blood vessels caused by administering the drug dinitrophenol, which increased the metabo-lism of virtually all tissues of the body about fourfold. Note that with nervous control to keep the arterial pressure from falling, dilating all the peripheral blood vessels caused almost no change in arterial pressure but increased the cardiac output almost fourfold. 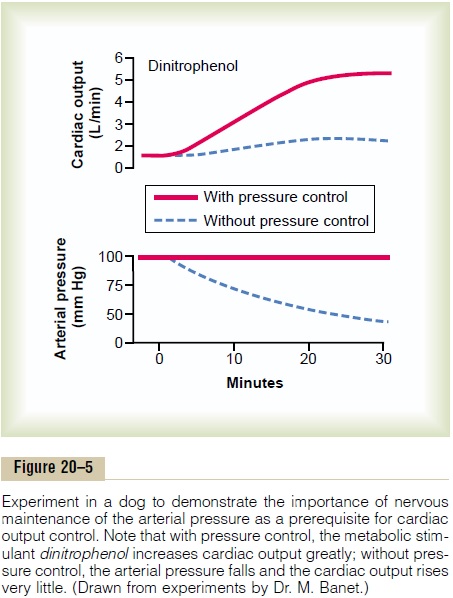 However, after autonomic control of the nervous system had been blocked, none of the normal circula-tory reflexes for maintaining the arterial pressure could function, and vasodilation of the vessels with dinitrophenol (dashed curves) then caused a profound fall in arterial pressure to about one half normal, and the cardiac output rose only 1.6-fold instead of 4-fold.

Thus, maintenance of a normal arterial pressure by the nervous reflexes, by mechanisms explained, is essential to achieve high cardiac outputs when the peripheral tissues dilate their vessels to increase the venous return.

Effect of the Nervous System to Increase the Arterial Pressure During Exercise. During exercise, intense increase inmetabolism in active skeletal muscles acts directly on the muscle arterioles to relax them and to allow ade-quate oxygen and other nutrients needed to sustain muscle contraction. Obviously, this greatly decreases the total peripheral resistance, which normally would decrease the arterial pressure also. However, the nervous system immediately compensates. The same brain activity that sends motor signals to the muscles sends simultaneous signals into the autonomic nervous centers of the brain to excite circulatory activity, causing large vein constriction, increased heart rate, and increased contractility of the heart. All these changes acting together increase the arterial pressure above normal, which in turn forces still more blood flow through the active muscles.

In summary, when local tissue vessels dilate and thereby increase venous return and cardiac output above normal, the nervous system plays an exceed-ingly important role in preventing the arterial pressure from falling to disastrously low levels. In fact, during exercise, the nervous system goes even further, pro-viding additional signals to raise the arterial pressure even above normal, which serves to increase the cardiac output an extra 30 to 100 per cent.