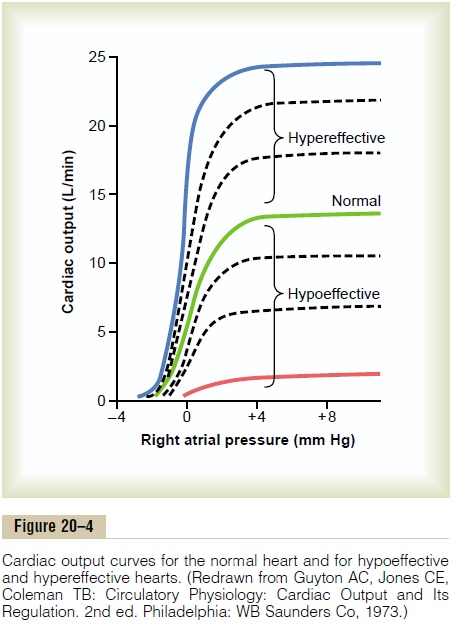 Factors That Can Cause Hypereffective Heart

Only two types of factors usually can make the heart a better pump than normal. They are (1) nervous stim-ulation and (2) hypertrophy of the heart muscle.

Effect of Nervous Excitation to Increase Heart Pumping. We saw that a combination of (1) sympa-thetic stimulation and (2) parasympathetic inhibition does two things to increase the pumping effectiveness of the heart: (1) it greatly increases the heart rate— sometimes, in young people, from the normal level of 72 beats/min up to 180 to 200 beats/min—and (2) it increases the strength of heart contraction (which is called increased “contractility”) to twice its normal strength. Combining these two effects, maximal nervous excitation of the heart can raise the plateau level of the cardiac output curve to almost twice the plateau of the normal curve, as shown by the 25-liter level of the uppermost curve in Figure 20–4.

A long-term increased workload, but not so much excess load that it damages the heart, causes the heart muscle to increase in mass and contractile strength in the same way that heavy exercise causes skeletal muscles to hypertrophy. For instance, it is common for the hearts of marathon runners to be increased in mass by 50 to 75 per cent. This increases the plateau level of the cardiac output curve, sometimes 60 to 100 per cent, and therefore allows the heart to pump much greater than usual amounts of cardiac output.

When one combines nervous excitation of the heart and hypertrophy, as occurs in marathon runners, the total effect can allow the heart to pump as much 30 to 40 L/min, about 21/2 times normal; this increased level of pumping is one of the most important factors in determining the runner’s running time.

Factors That Cause a Hypoeffective Heart

Any factor that decreases the heart’s ability to pump blood causes hypoeffectivity. Some of the factors that can do this are the following:

Increased arterial pressure against which the heart must pump, such as in hypertension